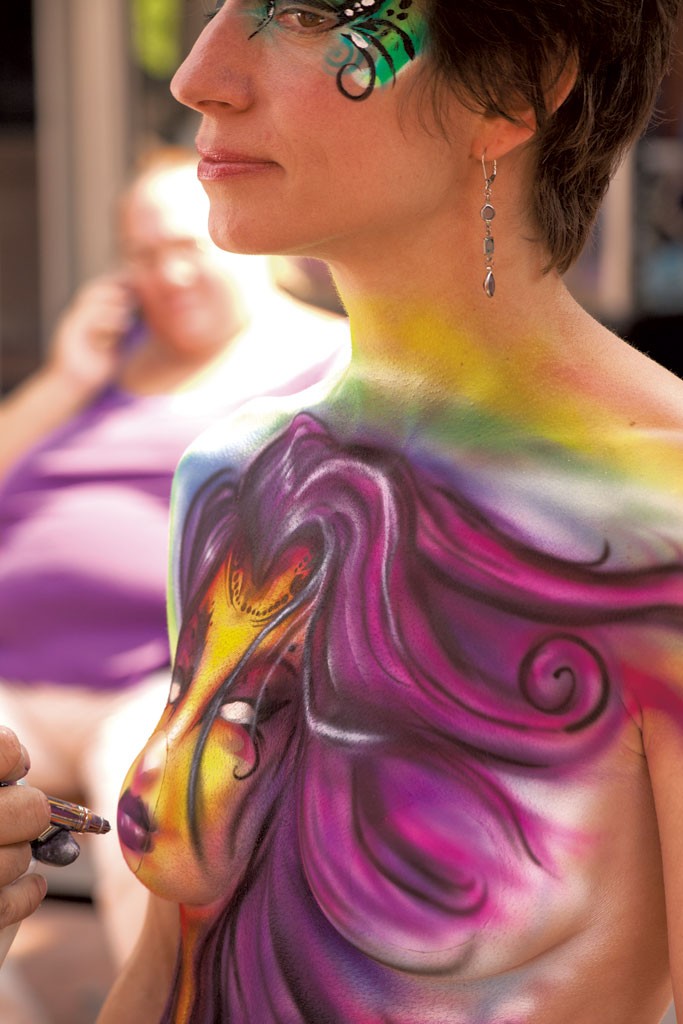 "Every moment of every day, there are TVs playing in my head," says Hinesburg bodypaint artist Sean Avram. "I gotta look around to see which one I want to watch."

The genial Avram, 39, who co-owns HyperFocus Art with his wife, Jana, is referring to the ADHD diagnosis he received a few years ago. Even though he can make light of his condition, he acknowledges that it defines who he is.

More than once in conversation with Seven Days, Avram also refers to his ADHD as "the source of my superpowers." A former cable-access host in his native London, Ontario, Avram remarks, "I'm a good artist and a good onstage guy because I can make connections really quickly." Those superpowers appear to have made an impression on the producers of the new GSN reality show "Skin Wars," on which Avram is a contestant.

HyperFocus Art — under whose umbrella Avram operates both a studio and the "Awesome Shop" cart on Burlington's Church Street, paints airbrush murals and hires himself out as a magician and face painter — reflects his many artistic interests. "I'll paint anything on anything," he says.

About 10 years ago, though, Avram's artistic restlessness led him to bodypainting, and there the restlessness came to a halt. "I've never had an interest that's lasted that long," he says; hence the name of his company. He tells of being at a convention and watching Nick and Brian Wolfe, legends in the bodypainting world, create a detailed work of body art in just three minutes. "I thought, I don't know what's happening here, but I'm going to do that for the rest of my life."

Body painting is now Avram's ticket to greater renown. "Skin Wars," which premieres this week on GSN, pits Avram and nine other bodypaint artists against one another; one artist is eliminated in each episode. The show is hosted by actress-model Rebecca Romijn, who's been a bodypainted Sports Illustrated swimsuit model and the cerulean-skinned shape-shifter Mystique in the X-Men films. The show's judges include bodypainter Robin Slonina and reality-show stalwart RuPaul.

By phone from Los Angeles, Jill Goularte, the show's cocreator and executive producer, says she found Avram when he submitted a tryout video. "His passion for this art is unbelievable, [and] his detail is amazing to us," she says. "Both [cocreator Michael Levitt] and I were so impressed with ... his quirky personality. And he's never at a loss for words. He sets his standards so high. He's an incredible professional."

Though currently bound by a nondisclosure agreement, Avram is able to discuss "Skin Wars" in general terms. He was awed by the "challenges" dreamed up to test contestants' skills. "I've been in the industry quite a bit and have been exposed to a lot of people and a lot of ideas. [The challenges] surprised me," he says.

Avram admits that he was initially somewhat skeptical about the show. "You figure: reality shows — canned drama, unrealistic situations," he says. "But everything in that show is about us as artists, about achieving our potential, about bringing bodypainting to the mainstream."

That last item is a tall order. You won't find bodypainted works in the Louvre, and airbrushed art carries the whiff of the carnival midway. Avram says that achieving legitimacy for his art is "the number one constant struggle. We still get people asking us to work for free. But now I'm on GSN, so I think that's pretty good."

Jana, also a bodypainter as well as her husband's main model, says she often fields calls from people who ask if she and Sean can "volunteer their time" for an event. "Well, that means we have to turn down a gig where someone else will pay me. This is our business; it's how we pay our bills."

When the Avrams meet Seven Days at Burlington's Orange Leaf (where one of Avram's murals adorns a wall), Jana is wearing a wild-colored shirt that Sean has airbrushed; he estimates its cost at $60. "Why is that an intimidating price?" he asks. "This is a custom order!"

Airbrushing T-shirts is one thing; applying pigment to the naked bodies of perfect strangers is another. Does he ever feel uncomfortable in the intimate relationships that his art demands?

"The first time [I painted someone]," Avram says, "I thought, Oh, man, I gotta paint her boobs now! Now, I'm just slapping on the base coat and thinking, Oh, wait, I have to introduce myself. It might be the first time they've found someone on the internet and gotten naked without even meeting them, but for me it's just Tuesday."

Avram loves bodypainting partly because it gives him an outlet for his restless energy, but he also admires the art's ability to "make people feel special."

Jana tells of a model who had recently undergone a reconstructive surgery that left her with significant scars. Initially, she says, the woman was "so uncomfortable, but by the time I got done with her painted top, she was as proud as can be ... She had come to terms with her body again."

"I've seen it a thousand times," says Sean. "People come into a situation where there's bodypainting and expect that they might be a little uncomfortable. But the minute you see it, it changes you forever. It's the most inclusive, magnetic art form I think I've ever seen." m