During the season of giving, no holiday gifts are more traditional than frankincense and myrrh. A Vermont-based company produces essential oils made from both and, in turn, provides its African partners with gifts that keep on giving, including food, safe drinking water, basic medical services and reliable income.

Böswellness is one of the world's only distilleries and suppliers of sustainable, fair-trade and certified-organic frankincense and myrrh products. Founded in 2005 by Mahdi Ismael Ibrahim, the Colchester-based company's core mission includes supporting its supplier communities in Somaliland, an autonomous region of Somalia that declared independence in 1991.

Ibrahim, 52, is a former refugee who fled Somalia's civil war in 1988, moving to Montréal before he immigrated to the United States. He now runs the company with his wife, Jamie Garvey, and business partner Casey Lyon, who met Garvey while they were attending the University of Vermont.

Though the vast majority of the oils the company produces are sold wholesale to other manufacturers of retail goods, Böswellness also sells its own frankincense and myrrh products, including essential oils and hydrosols, directly to consumers.

It's fitting that a frankincense and myrrh company was founded by someone named Ibrahim, Arabic for Abraham, the common patriarch of three of the world's major religions.

In Christianity, legend has it that frankincense and myrrh were two of the three gifts the Magi brought to Bethlehem for the newborn baby Jesus. Spicy and aromatic like balsam, frankincense and myrrh often are used in the incense that Catholic priests burn during Mass and as incense in Episcopal and Eastern Orthodox services. Frankincense also creates the white smoke the Vatican uses to announce the selection of a new pope.

But frankincense and myrrh, which are actually resins derived from tree species native to the Middle East and the Horn of Africa, have roots stretching back thousands of years and across many different cultures.

In Judaism, frankincense and myrrh are mentioned in the Torah and Talmud for their use in anointing priests and kings in Jerusalem's Holy Temple. In Buddhism, the resins were traditionally used as incense during meditation and prayer. And in Islam, the prophet Muhammad directed his followers to purify their houses with the smoke of myrrh.

That last practice continues to this day. As Ibrahim explained during a recent tour of the company's distillery near Malletts Bay, his friends and relatives in Somaliland routinely use frankincense and myrrh in their homes.

"My mom burns it every day in the house when she's praying," he said. "The smoke kills the bacteria in the air. It will immobilize mosquitoes, as well."

Throughout the Middle East and Africa, people often soak frankincense or myrrh in water before drinking it. Both have been used for centuries to treat arthritis, asthma and anxiety, and scientific studies have shown that they have antimicrobial and anti-inflammatory properties. Frankincense, used by the ancient Egyptians to preserve the skin of mummies, is now added to modern skin-care products to combat wrinkles and acne, Garvey noted.

Both resins have long been used in the New World, too. Lyon, 44, grew up on a farm in southwestern Oregon. He remembers his family using myrrh, which in Arabic means "bitter," as an unpleasant-tasting but effective homeopathic remedy.

"Whenever we got sick, my mom would always be looking at an herbalist handbook," Lyon recalled. "Goldenseal and myrrh were two of her go-to treatments ... So when I smelled myrrh, when Mahdi, Jamie and I all started working together, it just took me back to being a child."

None of the three business partners had any prior experience making essential oils before Böswellness launched. The idea was conceived when Ibrahim returned to Somaliland in 2002 after his father was involved in a serious car accident. Following his death, Ibrahim returned to Vermont. One night his father came to him in a dream and, enveloped in frankincense smoke, asked him to do something to help his people back home.

Because his parents had operated a general store and Ibrahim had always wanted his own business, he began searching for ways to market frankincense, which has been harvested in Somaliland's Sanaag region for centuries.

After countless hours of research, Ibrahim arrived at a concept that seemed aptly Vermonty in nature: He would boil it in a process similar to how maple syrup is produced, using much of the same equipment. The major difference, Lyon noted, is that instead of collecting what's left behind in the kettle, they condense and recapture the oils that get boiled off.

Indeed, Ibrahim's prototype still, which resembles a coffee urn, now sits in the lobby of the Böswellness distillery. In an adjoining room is the company's industrial-size stainless steel distiller, in which about 22 pounds of essential oil is produced per day. While that might not sound like much, Ibrahim explained, he pointed out that only 4 to 5 percent of the raw resin ends up in the finished product.

Stacked along three walls of the warehouse are hundreds of pounds of raw frankincense and myrrh, which arrive, like coffee beans, in hefty white sacks. Frankincense resembles jewel-size chunks of brown sugar. Myrrh is also crystalline and sticky but comes in larger and darker pieces, like peanut brittle. As Garvey noted, some "resin enthusiasts" keep large myrrh crystals around their homes, like geodes, for decorative or spiritual purposes. 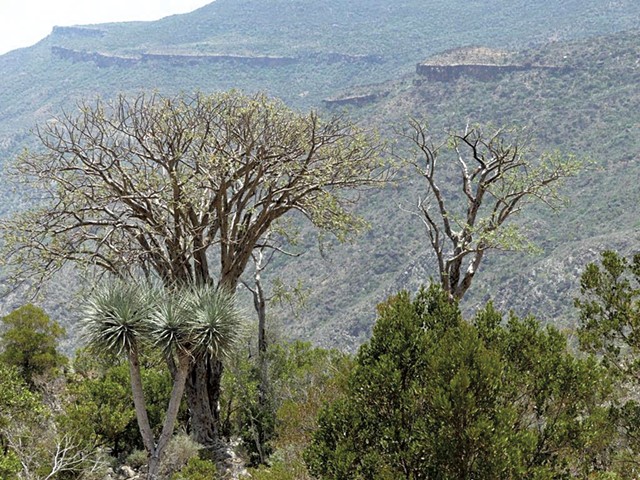 The harvesting process in Somaliland is similar to that of maple syrup, Ibrahim said. Frankincense comes from the Boswellia genus of trees — hence the company's name — and is extracted by making a gash in the trunk, from which the resin oozes and then hardens into golden blobs. Böswellness uses two species to produce its myrrh oils, made from resins that flow naturally from the tree without incisions or taps.

The resins' route out of Africa sounds almost biblical. The arid, rocky and mountainous terrain where these hardy trees grow on limestone cliffs are owned by families and tribes who have exclusive access to them, Ibrahim said. His brother, Idris, the company's head of sourcing in Somaliland, travels from village to village forging relationships with harvesters, who gather the resin by hand, carry it out of the mountains on foot and truck it to the Port of Berbera.

From there, the frankincense and myrrh travel via transatlantic container ship to the Port of Montréal, where they're loaded onto trucks and driven south to Vermont. The entire process takes several months.

"We've got to help these folks and give them more income." Mahdi Ismael Ibrahim tweet this

Like much of Africa, the history of Somaliland, a former British protectorate, is bound up in centuries of European conquest and exploitation, including the use of its frankincense and myrrh. So when Böswellness launched, Ibrahim said, they did something that might seem counterintuitive for a manufacturer: They deliberately paid above-market prices for the raw materials.

"Before, it was ridiculously cheap, and we were like, 'No, we're not going to keep it this way. We've got to help these folks and give them more income,'" he said. In fact, once Böswellness began paying its native harvesters more, the company's European competitors had to match their prices or go without.

Ibrahim and his brother also met with village elders and asked what they needed to improve their living conditions. The requests were simple: access to clean water and food, basic health services, and better educational opportunities. As Lyon explained, children in these villages aren't permitted to attend school until they've finished all of their chores. Girls in particular are expected to ensure that their families have water. If there's no functional well nearby, he said, just filling water jugs and carrying them home can take all day.

To help meet those needs, Böswellness directs 20 percent of its gross revenue to community development in Somaliland. Because of the region's chronic water shortages, some of that money goes to digging wells, purchasing solar pumps and building water storage tanks in the villages and at schools.

Böswellness also funds the Centre for Frankincense, Environmental, and Social Studies, a Somaliland-based research center that aims to protect the sustainability of the country's budding frankincense industry.

Ibrahim believes that Böswellness is the only company in the United States producing genuine and organic frankincense and myrrh oils. Which is not to suggest that other companies aren't selling products that claim to contain those resins.

"It's become huge," Garvey said. "Everyone and their grandmother uses it, and there's a lot of crap on the market."

"We've always wanted people to know what real frankincense and real myrrh are like." Jamie Garvey tweet this

Since the company's inception, she noted, one of its biggest challenges has been educating people about why they should pay a premium for Böswellness frankincense and myrrh. As she explained, some producers blend look-alike products made from pine with only a minuscule amount of authentic frankincense, label it "pure" and "natural," and then sell it below what it costs to produce the real McCoy.

Though less than 1 percent of the company's revenues come from direct sales to consumers, Garvey added, "From the beginning we've always wanted people to know what real frankincense and real myrrh are like — and have access to them at a reasonable price."

For their part, Ibrahim and Lyon both say that one of the best parts of the job is that they work in a calm environment, especially given all the frankincense and myrrh in the air.

"And, at the end of the day, we're not just clocking in, going to work and going home," Lyon added. "We're doing something good for people."

It's the true spirit of the season.