Vermont Authors to Read on the Beach 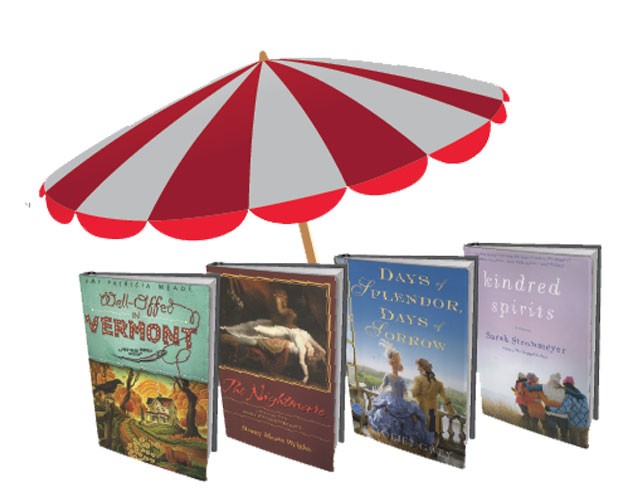 Perhaps you’re planning to use this summer to take on all 448 pages of In One Person, John Irving’s latest bestseller. Or to read Infinite Jest, finally. But when you’re baking in the sun, sometimes you crave something a little shorter, simpler, frothier... beachier, in short. We’ve paged through some recent novels by Vermont authors that just might go well with your swimsuit and sunscreen, whether your tastes run to history, mystery, female bonding or international intrigue.

Bennington resident Amy Patricia Meade, the author of several previous mysteries, kicks off her new “Pret’Near Perfect Mystery” series with this whodunit set in the fictional Windsor County town of Teignmouth. (“Pret’ near,” according to the book, is one of those things real Vermonters say.)

Nick and Stella Buckley are a New York professional couple who arrive at their just-purchased bucolic farmhouse to find a fresh corpse in the well. Evicted by the police investigation and unable to find a motel during leaf-peeping season, they move into a deer camp and spend their time playing amateur sleuth. Was Allen Weston, the owner of Speedy Septic Service, the victim of a hunting accident or a murderer?

Well-Offed is a “cozy” mystery, which means the tone stays light, with lots of flirty banter between Nick and Stella and no dwelling on the creepiness of the local criminal element. In fact, the residents of Teignmouth come across as mostly harmless, if none too bright, as one by one they spill their guts to the nosy flatlanders. Even the sheriff amiably steps aside, on several occasions, to let the Buckleys do his job for him.

Fans of the darker, savvier Vermont mysteries of Archer Mayor and Don Bredes may be rubbed the wrong way by Meade’s focus on the newcomers and their snarky reactions to the town’s eccentric yahoos. That said, the protagonists are otherwise likable, the mystery isn’t too simply solved and the tone may be just right for your beach blanket.

Here’s a different kind of whodunit. Middlebury’s Nancy Means Wright, with her own series of Vermont-set mysteries under her belt, has shifted her attention to 18th-century England. Her sleuth is Mary Wollstonecraft, the radical writer often called the “first feminist” for her A Vindication of the Rights of Woman. Wollstonecraft lived on her own, rejected domesticity (but not love) and would eventually die giving birth to the future Mary Shelley. In short, the historical record paints her as a considerably more tempestuous and risk-taking figure than was Jane Austen — who has also become a mystery heroine of late.

When we catch up with Wollstonecraft in Means Wright’s second novel about her, set in London in 1792, the writer — still a virgin in her early thirties — has fallen hard for Henry Fuseli, the Anglo-Swiss artist best known today for his gothic fever dream “The Nightmare.” But Fuseli is married — and an egomaniac who goes ballistic when his famous painting is stolen. Furthermore, he may or may not have something to do with the recent strangling of a prominent bluestocking. Wollstonecraft must solve both crimes before an innocent takes the blame — or she becomes the next victim.

Given that the science of detection was in its infancy in the 1790s — good luck trying to get information from a blood sample — Wollstonecraft’s prying doesn’t seem as unorthodox as it would in a modern setting. Means Wright piles on plot twists that would fit right into an overwrought novel of Wollstonecraft’s era. Her dialogue doesn’t always feel true to the period, but the author has generally done her homework, making The Nightmare a pleasant jaunt back to French Revolutionary times with an appealingly spirited protagonist. Just be glad you don’t have to worry about smallpox.

Not bored of the age of powdered wigs? How about experiencing it from a throne? Juliet Grey is a pen name of prolific writer Leslie Carroll, a part-time Arlington resident, and Days is the second book in her trilogy about Marie Antoinette, taking her from Louis XV’s death to the early days of the revolution.

Be assured, France’s ill-fated monarch does not solve mysteries here. Grey’s Marie Antoinette sticks to doing things the historical queen did: running up debts, meddling in politics and coaxing her dweeby husband into the bedchamber so they can produce an heir.

Byzantine court intrigues don’t make for the most engrossing plot, and Marie, who narrates most of the novel, is only a semi-sympathetic figure. Like filmmaker Sofia Coppola’s Marie Antoinette, Grey’s queen is good-hearted but unapologetic about her love of luxury. The book becomes fashion-porn escapism in chapters detailing her lavish balls, parties, dresses and hairdos — only to revert, pages later, to drier discussions of ruling a kingdom.

It’s a mixture of sober historical fiction and fluff that will appeal to many readers, provided they aren’t put off by Grey’s affectation of sprinkling her prose with French. (It makes sense for her to use untranslatable terms such as canaille, but seems plain silly to avoid the English words for genitals, let alone everyday objects.)

With her blend of independence and irresponsibility, Marie emerges as the 18th-century equivalent of a reality-show diva — not such a far-fetched comparison, considering how much of her life she lived in public. Grey presents her story as a tragedy in the making, yet when Marie excuses her taste for mile-high coiffures by insisting that the queen must set the nation’s tone, it’s hard not to think the sans-culottes had a point.

Martini recipes. Undying female bonds. Cancer. Secrets. References to the oeuvre of Cyndi Lauper. The latest from Middlesex author Sarah Strohmeyer could serve as a template for women’s fiction (the grown-up sister of “chick lit”). It doesn’t offer many surprises, but fans of the genre will still enjoy joining this circle of friends.

The novel opens with the suicide of terminally ill Lynne, a suburban wife and mother who leaves an unusual last testament to the three women who have been her closest confidants for decades. Charged with a secret from Lynne’s past, and each grappling with their own midlife issues, Carol, Beth and Mary Kay set out on a road trip to take care of their departed friend’s unfinished business. They fuel themselves with lemon martinis, blue martinis and other cocktails designed for and by girls who just wanna have fun. Readers will no doubt want to try the recipes at home.

Another women’s fiction title, Britton’s debut about two aging sisters grappling with the repercussions of a childhood tragedy actually takes place on and around the beach, with pungent seaside atmosphere.

Caves! A deadly virus! Special-ops agents! Techno-gadgets! A kickass heroine! Tabor adds a dash of James Bond to the Michael Crichton template for a compulsively readable, if occasionally silly, thriller. Exploring those miles-deep subterranean passages will keep you cool on a hot day.

An old-fashioned, plot-driven historical novel that covers centuries of passion and prejudice in the American South.

And a Couple of Indies

This high-concept action-adventure from a Montpelier author, about a Chinese magnate with a plot that threatens the Vatican, comes with a rave from best-selling thriller author Jeremy Robinson.

Why did England’s Centre for Fortean Zoology — a nonprofit committed to researching “mystery animals” — publish a book by a Williston attorney? Well, it’s about what happens when “a fishing trip goes horribly wrong,” and a group of friends attracts the wrath of a giant snapping turtle. Or do they? Using an unreliable focal character, Bredice keeps readers wondering what really happened.