The first story Jennifer McMahon wrote was about a haunted meatball. She was in third grade in Connecticut. Her teacher liked it, so McMahon wrote another story about a mud monster. Then one about a kid who found a body in the wall of his house. Despite being a person who was and is easily scared, she kept returning to spooky stories.

"I've always been drawn to the creepy side," McMahon said. "I took my mother's copy of The Amityville Horror when I was far too young to read it, and I was reading under the covers with a flashlight and terrifying my friends at sleepovers by reading passages out loud."

McMahon, now 52, came to Vermont to study poetry at Goddard College in the late '80s. As she kept writing, she found her poems getting "longer and more complicated," she said.

"I was working on a prose poem that was more like a story, and it kept getting longer and longer. I thought, Oh, I'm writing a short story. I don't know anything about this," she said. "And then I realized, Oh, my God, I'm writing a novel."

"Each book is a leap of faith." Jennifer McMahon tweet this

To date, the Montpelier-based author has published 10 novels; some are New York Times best sellers, and all are on the "creepy side," McMahon said, with subjects ranging from missing girls to cultish groups to ghosts and strange beasts running rampant in Vermont woods.

Her most recent, The Drowning Kind, came out in April. It features a Vermont house with a pitch-black backyard pool fed by a cold spring and two sisters who are drawn to the pool's mysteries. McMahon alternates that modern-day narrative with the perspective of a woman who visited the spring and a then-adjacent hotel in 1929. She builds dread throughout the tale, as the reader wonders whether there's actually something in the water or it's all in the narrators' heads.

McMahon spoke with Seven Days in April about her writing process and what draws her to the horror genre.

SEVEN DAYS: This is your 10th novel. What have you learned about book writing in that time?

JENNIFER MCMAHON: You would think that I would be more secure about my knowledge by now and that it would be easier in some way. But it's not. Every book has its own challenges, and every book is its own journey. 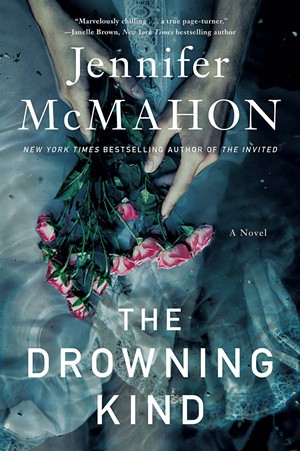 I go into every book without a plot, a plan or an outline. I start with a single image or character and see where it takes me. I definitely write myself into little corners and do little U-turns and realize, Oh, this isn't going the way that I wanted it to. Often I don't know how the book is going to end. If you see me the day I finish my rough draft, you can ask me what my book is about, and sometimes I'm not sure how to explain it, because it's such a mess.

Then I print it, and I lay it out on the floor of my house, chapter by chapter. I spend time walking around and looking over it and picking up chapters and putting in little placeholders where I realize, Oh, something else needs to happen here. Once I've got the bird's-eye view and I start messing around with it for a few days, then I start to really understand the shape of the story.

SD: This strikes me as a scary way to work, because you're within a genre that requires some sort of resolution. Writers play with that, of course, but you're expected to go somewhere in the end.

JM: Maybe each book is a leap of faith and just trusting that the story and the characters will show me where they want to go.

I think ideas come when they're ready to come. If I have a big problem, I feel like the thing that works best for me is to try not thinking about it. I'm a big walk taker. I get into the Zen of walking and being in the woods with my dog, and then the solution will come to me.

SD: Do you think Vermont and New England are particularly spooky, or could you set your novels anywhere?

JM: All my books are set in Vermont. I often try to set them somewhere else, but I feel like it's such a part of who I am.

I see the setting as a character of its own. It's influencing the other characters in ways they might not even realize. I do a character study for the setting every time I sit down to work on a book. I'll spend a lot of time getting to know my characters and interviewing them and asking them questions, and I do that for setting, too.

With this book, I did it for the pool. I spent a lot of time with the pool, asking it, "What's your deal, pool?" Some of the questions I ask all my characters, including my setting, are "What do you want most? What are you most afraid of? And what's the one thing you've never told anyone?"

SD: You admit to being a "scaredy-cat," but you're also drawn to these stories. How does that play out in your head?

JM: When you go to school for writing, you hear over and over, "Write what you know." But my own motto is "Write what scares you." That's where the juicy writing is. That's when the writing is best, when I'm writing from fear and exploring something. And it's cheaper than therapy.

I think horror, as a genre, is cathartic. You can get lost in a scary story, and it's like you're being taken on a journey. You face the thing that scares you. You conquer it on the page, right? It's a rush, and you survive.

SD: Do you have any personal ghost stories, things that you can't explain or rationalize?

JM: When I was growing up as a kid in my grandmother's house, I was pretty convinced that there was a ghost named Virgil living in the attic. I believed that he came down the attic steps and would sit on the edge of my bed and talk to me. I would wake up in the morning and draw pictures of Virgil.

Do I really think it was a ghost now? Probably not. I was an imaginative, quirky kid. But who knows? Maybe.

I went to "Emily's Bridge" in Stowe last Halloween with my daughter. I've been there many times before. We were on our way out, and the car was stopped in the middle of the bridge. [My daughter] was leaning out, taking pictures. And from behind us, we heard what sounded distinctly like a girl laughing. Did I get out to investigate? No. I was too scared. I drove away very quickly.

SD: Are you content with those things being unexplained?

JM: I am, because I don't think I can offer an explanation. I'm content to explore the possibility of what they might be, in my own mind and through my writing.