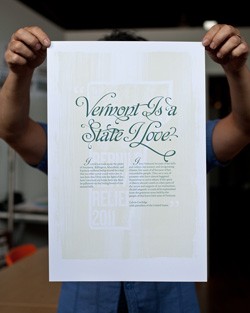 When Irene demolished the Lower Bartonsville covered bridge, “there was a unanimity of feeling” among Vermonters, says Bellows Falls artist Charlie Hunter. “We all mourned the loss of a part of our heritage.”

Outside Vermont, however, that feeling wasn’t so unanimous.

Hunter’s two cats are also glad the bridge is gone, he jokingly adds. He would drive Silas and York across the 151-foot-span whenever it was time for them to visit the vet’s. But feline glee gave way to displeasure, Hunter reports, when the pair learned that he’s helping raise money for the bridge’s reconstruction.

Hunter is one of two local artists currently using their craft to promote rebuilding by creating vivid icons of their state.

The widely exhibited landscape painter has produced an edition of 250 archival giclée prints of the bridge as it looked prior to the storm surge. He’s selling them for $99 apiece, with half the proceeds going to a rebuilding fund established by the town of Rockingham. The cost of printing and mailing accounts for most of the balance, Hunter reports. He figures he’ll pocket about $13 per print.

About 50 of the art-deco-style posters were sold within a few days after the offer was announced through Facebook. Even if the entire run finds buyers, Hunter notes, his contribution won’t come close to covering the cost of replacing the bridge. A $1 million town insurance policy will pay for reconstruction of the wooden portion, but not of the original stone abutments. Replacing those, town officials estimate, will involve well over $100,000 in additional expenses.

Hunter’s orignal 27-by-41-inch oil-and-acrylic painting of the bridge, available for $3000, is modeled on old-time travel posters. The structure looks handsome and jaunty in a bold rendering that takes a few subtle artistic liberties. The architecture he depicts is actually a “pastiche” of historical details, Hunter notes, and adds that he injected some visual drama into the approach road to the bridge.

Although his body of work includes some gloomy images of Vermont, “it would have been inappropriate to do something dark” in the case of the bridge poster, Hunter says.

John Siddle, associate creative director of JDK Design in Burlington, worked from the same assumption in producing his own poster to promote flood relief, “VT Relief 2011.” This edition of 150 prints sets a suddenly famous quote by President Calvin Coolidge against a finely shaded outline of Vermont’s shape.

In a 1928 speech delivered after he viewed the destruction wrought by similarly ruinous flooding, Coolidge described the residents of his native state as “a race of pioneers who have almost beggared themselves to serve others.” He also refers to Vermont as “this brave little state.”

“We didn’t want [the poster] to be about the magnitude of what happened with Irene,” Siddle explains. By focusing on Coolidge’s words — beneath the title “Vermont Is a State I Love” rendered in a florid font — the print acquires “a timelessness” transcending the flood of 2011, Siddle says.

The 12.5-by-19-inch poster, a collaboration between JDK and the Iskra Print Collective, sells for $10. Proceeds go to the Waterbury Good Neighbor Fund.