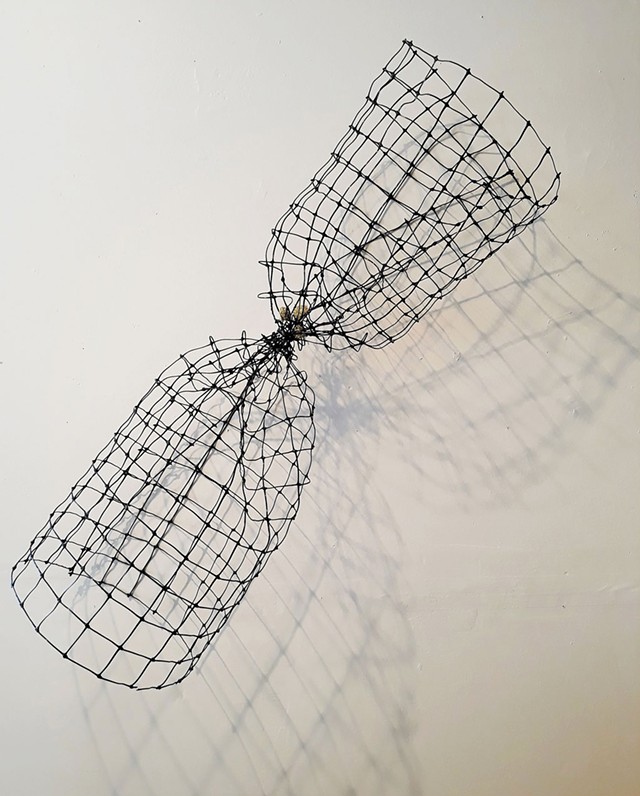 Everyone knows the childhood game of Telephone, right? Well, imagine if, instead of being a linear progression from one ear to the next, the prompts went to multiple people at once, creating more of a family tree than a telephone wire. And, instead of a continuum of words that are misconstrued along the way, the medium of the prompt transforms as it filters from one artist to another; for example, a painting might be translated into music, or poetry, or dance.

That is the simplest description of Telephone. The international art project and game launched on March 23, 2020, and has concluded with a massive online exhibition. The collection of interconnected pieces went live for public viewing on April 10.

Telephone's press release is an exercise in superlatives. Nine Vermonters were among more than 950 artists in 489 cities and 70 countries who took part. The team of 10 volunteer administrators came from some of the biggest tech companies in the world. The online exhibition integrates more than 10,000 artist files. A viewer can choose among hundreds of "pathways" leading from original to final artwork.

Exactly nobody made any money from the project.

Telephone's originator is Seattle artist and UX designer Nathan Langston; a previous game was in 2015, and its prompt had something to do with the sea. On the website, Langston explains how he chose trees as a general topic for this Telephone, searching thousands of sources for a prompt. He found it in an obscure Newsweek article on "The Majesty and Mystery of India's Sacred Banyan Trees" by British biologist Mike Shanahan. (Coincidentally, Shanahan's American publisher for 2016's Gods, Wasps and Stranglers: The Secret History and Redemptive Future of Fig Trees is Vermont's Chelsea Green Publishing.)

Instead of following a straight progression, as in the 2015 game, Langston threw a curveball. "Halfway through the game, we reverse the process," he writes. "We start assigning multiple artworks to a single artist. We ask each artist to find what the works have in common and to create a translation of that into their own art form."

Somehow, it's all meant to conclude with a single artwork.

Cabot-based Van Fleet said the artwork she received for inspiration was a mixed-media collage by a Canadian artist named Sahar Hakimi. She submitted the following explanation of her own creation, an hourglass-shaped construction made from wire she found in her barn.

"The grid/window in the piece that was whispered to me suggested the liminal zone between inside and outside, past and future, you and me, the human and non-human worlds," wrote Van Fleet. "Suddenly, I began to see it as an hourglass — the sand falls down, you turn it over, and then it starts flowing all over again."

The Telephone administrators dispatched an image of Van Fleet's work to another artist. Neither she nor the other nearly 1,000 participants had any idea what the cumulative results would be until the reveal on April 10. "The vision for this thing was really, really cool," Van Fleet said.