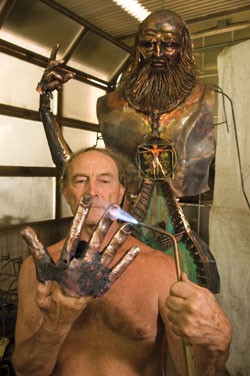 I’ve been waiting to do this all my life,” Dennis Sparling, 66, says of the bronze sculpture of Leonardo da Vinci that he’s creating in his New Haven studio.

Best known in the Burlington area for the “Leap Froggers” sculpture on the Church Street Marketplace and “UVM Catamount” near the Royall Tyler Theatre, Sparling has mostly worked on private commissions throughout his 40-year career. And he’s happy to be done with that now. “I’ve stopped making things for people who don’t really appreciate it except for their own aggrandizement,” he says.

A recent reading of da Vinci’s letters acquainted Sparling with a kindred spirit. “I realized he had done battle with some of the same things I object to in contemporary life: artists having to do deals for money, for example. I thought, This guy is one of the biggest heroes!” he says.

Therefore, Sparling wanted his version of the quintessential Renaissance man to be physically big. It will stand nearly 10 feet tall on its pedestal, with da Vinci looking like an Old Testament prophet: lushly bearded, the index finger of his right hand pointed heavenward.

Looming above the metal scraps, masks and sculpted light fixtures scattered around Sparling’s quarry-side studio, the half-finished piece already appears imposing. The sculptor will have to work on it steadily to meet a deadline for completion in less than two months. Sparling’s da Vinci is intended as the centerpiece of a show organized by Middlebury artist Doug Lazarus that’s scheduled to open September 19 at the World Canals Conference in Rochester, N.Y.

Two other Vermonters — Cameron Schmitz of Vergennes and Stowe’s Craig Mooney — are among the dozen artists whose work is included in “Re Inspired: An Artistic Navigation of the Erie Canal.” Da Vinci was considered a fitting star for such a show because he devised the principles of raising and lowering water levels in canals.

Mooney says he was invited to participate because Lazarus wanted the exhibit to present a variety of styles and media. A view of the Erie Canal from a mountain near Amsterdam, N.Y., is characteristic of Mooney’s oil landscapes in its semi-abstract rendering of the interplay among clouds, sunlight and water.

Mooney was also inspired to take part because an Irish ancestor of his, who settled near Albany, N.Y., may have worked on the Erie Canal as a stonecutter. Thousands of Irish immigrants helped build the 185-year-old canal, which connects the Hudson River to the Great Lakes. Lazarus made sure to commemorate their labor by arranging for Cormac O’Leary, an artist from County Leitrim in Ireland, to come to the United States and paint some Erie Canal scenes that will be included in the show. Middlebury Police Chief Tom Hanley, who fronts the traditional Irish band O’hAnleigh, provided O’Leary with space in the town’s police department to use as a temporary studio.

Lazarus, who is as much impresario as artist, persuaded several engineering firms and the American Canal Society to donate a total of $70,000 to help finance the show. Last year he organized “Champlain’s Lake Rediscovered,” a touring exhibit of 50 paintings keyed to the quadricentennial celebrations. Like the lake show, “Re Inspired” is scheduled to make several stops, though this time none is in Vermont.

Lazarus got the idea for an Erie Canal exhibit after completing a series of paintings of refurbished canals in Scotland at the invitation of British Waterways, the organization responsible for maintaining the UK’s canals and rivers. “A friend said to me, ‘Why are you going all the way to Scotland to paint canals? You could do the same thing right next door in New York,” Lazarus explains.

For more info on the World Canals Conference, September 19-24 in Rochester, N.Y., and the canal art exhibit, visit www.wccrochester.org.