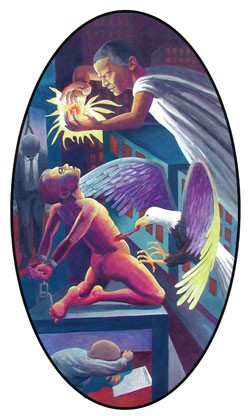 Al Salzman is at it again: He’s created a new series of seven large-scale, allegorical paintings that address current events in a rather startling way. The Fairfield artist, a retired art teacher, exhibited his previous series, collectively titled “Garden of Earthly Delights,” at Speaking Volumes during Burlington’s 2007 South End Art Hop. That scathing group of seven addressed various infractions of the Bush administration, as well as what Salzman sees as “our screwed-up national priorities.”

The new series — he’s finished four of the 55-inch-tall ovals — covers similar territory, but appropriates Greek and Roman mythology to tell the tale. “A lot of this I do intuitively,” Salzman says. “I just start doing sketches and let my subconscious lead me along, and, lo and behold, I find all kinds of metaphors and symbolism.”

Salzman’s figurative works speak to troubling issues, yet on the same canvas he manages to convey the hopeful with the grim. To do so, he borrows a composition technique from artists of the Gothic period: “They have a character doing different things in the same painting, violating the linear process — I find that very useful,” he explains.

Case in point: In Salzman’s painting “Prometheus Bound/Unbound,” the central figure — painted as Barack Obama — appears twice, both as a “savior” delivering light and in his perpetual punishment. In the myth, Prometheus steals fire from Zeus out of compassion for mortals, who are living in cold and darkness. But Zeus, super-pissed, captures him and binds him to a rock. Every day, an eagle tears out his liver, which renews itself so the terrible torture can be repeated in perpetuity. Oh, and in this case, the bird is a bald eagle — avian symbol of America. Yeesh.

Salzman’s background details are ripped from headlines, not mythology: a hanged man who might be any of the greedy, failed financiers offing themselves these days; a devastated man slumped over his foreclosure notice.

The paintings are executed in tempera and acrylic, with an almost lurid palette paired with shades of gray. Their size gives them the iconic feel of classic works hanging in major museums, but their subject matter probably ensures they never will. Meanwhile, on the eve of a new presidential era, “Prometheus Bound/Unbound” presents Salzman’s “guarded optimism” about Barack Obama. “We’re all elated by his victory over the troglodytes, but I, for one, am keeping my expectations in check,” he says. “But who knows? Maybe Obama is the man.”