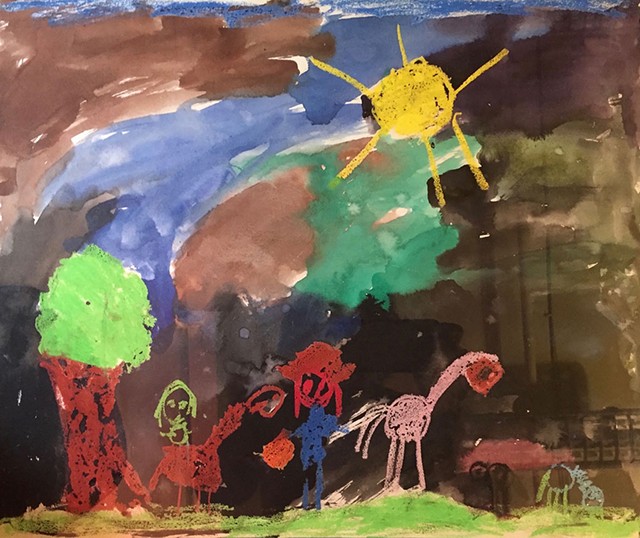 Art therapy may sound like the most fun subdivision of the mental health profession, but to some, it's also the most baffling. It's pretty much what it sounds like: using creative expression in a therapeutic setting to understand and address a client's mental and emotional experiences and needs. While art therapists do practice in Vermont, the state offers no official licensing in the field. And that makes defining or regulating art therapy a tricky business.

This legislative season, however, members of the Art Therapy Association of Vermont are continuing their fight for a path to state licensure. H.546, a bill assigned to the House Committee on Government Operations, could change the game for them.

Last weekend, six women met in the Burlington office of Lisa Myers, chair of ATAV's governmental affairs committee. The organization has existed since 1988 and became an official chapter of the American Art Therapy Association in 2000. Association interim president Lynn Butler-Dube of Huntington has been a member of the group since its inception. It now claims some 30 members across the state.

The ATAV offers multiple justifications for licensure. At the top of the list is that a lack of regulation could lead to potential harm to community members who are already vulnerable. Butler-Dube said her association's primary concern is "how we can protect the public, and the people that are vulnerable because they can't speak for themselves."

That wording is not necessarily figurative — many art therapy patients are nonverbal because they are very young or have experienced severe trauma, or both. As Myers put it, "No title protection means that anybody could put themselves out there without any credentials or training." That situation, she said, could be particularly threatening to children, trauma survivors, language-impaired individuals, and the refugee and immigrant population.

Another concern is the difficulty of coming to Vermont as an art therapist licensed in another state, or as a young professional seeking to complete clinical supervision and find work. In February 2014, Amy Rogers moved to Lincoln from California, where she had received board certification in art therapy in 2002. Now, she said, "I have to start back at square one."

Rogers is currently applying to the Board of Allied Mental Health for Vermont's marriage and family therapy license. That process presented difficulties to both Laura Gabert of St. Albans, who also attended last week's meeting and Myers, who went through a rigorous process that included taking four graduate-level courses at the University of Vermont. "It's expensive," she said.

Gabert said she is struggling with the financial burden of satisfying BAMH's requirements, which include completing five additional courses and an internship, although she already received her master's in art therapy from the School of the Art Institute of Chicago in 2007.

Kendra Schpok of Vergennes summed up the problem with the board thus: "BAMH does not recognize [art therapists'] vocation and their training."

Members of ATAV pointed out one crucial intersection of concerns about protecting vulnerable populations and making Vermont hospitable to art therapists: the state's opiate-addiction epidemic. "We need every mental health professional we can get," asserted Myers.

Schpok said that ATAV receives about a dozen inquiries per year from out-of-state art therapy students and professionals asking about internships, supervision and job opportunities — as well as the state's "licensure climate."

Referring to communities, particularly children, that are affected by opiate addiction, Myers said that art therapy is "often viewed as a much less threatening form of treatment," and that talk therapy alone can sometimes impede mental health care. She added via email, "It's important to reiterate the nonverbal, visual, symbolic nature of art therapy that accesses the right brain and traumatic memories and images."

National factors are also at play in ATAV's work toward Vermont licensure. According to Myers, the National Board for Certified Counselors has recently upped the ante by joining the Council for Accreditation of Counseling & Related Educational Programs, and is working toward ensuring that no state in the country will grant licenses unless a program is CACREP-approved. Myers wrote that this development will "effectively eliminate any opportunity for art therapists to gain licensure in states that don't have an art therapy license."

If Vermont were to instate art therapy licensure, the process would be overseen by the Art Therapy Credentials Board, which maintains uniform standards across the country. Myers sees a path to licensure in Vermont as important to safeguarding professional validity both locally and nationally. "State licensing," she said, "ensures the likelihood of more art therapists being able to work, period. And, more importantly, more people will be able to benefit from an effective treatment method."

So what's the holdup?

"Vermont doesn't like to regulate," claimed Myers. In July 2014, ATAV applied through the state's sunrise-review process, which, according to the secretary of state's website, responds to "requests from individuals or groups recommending that a profession be regulated." It adds, "Vermont law provides that a profession should be regulated only when necessary to protect the public."

Currently, 43 professions are regulated by the state. In January 2015, Vermont's Office of Professional Regulation officially turned down ATAV's request, concluding, "No instance of actual harm from art therapy wrongly practiced has been reported to OPR for this sunrise review," and that the "existing regulation of art therapists adequately protects the public and should continue."

The "existing regulation" referred to is a formal roster of "non-licensed and non-certified psychotherapists" maintained by BAMH, which does not impose any continuing education requirements on its listees. But, noted Fellicia Cota of Swanton, "There are people who are probably providing art therapy out there who are not on the roster, so how are they regulated?"

On Tuesday, January 12, Rep. Michael Yantachka (D-Charlotte), along with six other sponsoring representatives, introduced H.546, which would require the Office of Professional Regulation to license and regulate art therapists. In a phone call, Yantachka explained that, after his granddaughter suffered a traumatic brain injury, she worked with an art therapist "to gain some of that mobility back." He added, "Licensing would provide a social safety standard."

The House will vote on the bill in coming weeks. ATAV is currently seeking testimony and letters of endorsement in support of licensing art therapists.

The original print version of this article was headlined "Back to the Drawing Board: Vermont Art Therapists Push for Licensure Bill"