Vermont Architects Address the Climate Crisis Through the Built Environment 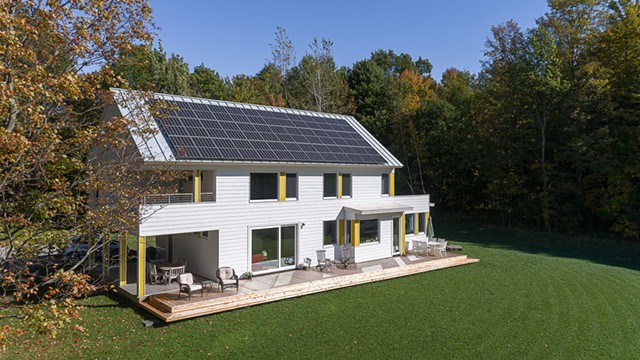 Last month, I had a heat pump installed in our Burlington home. The centrally ducted system helps address the climate crisis by replacing some natural-gas-fueled heat during the shoulder seasons with heat generated by electricity. Burlington's electricity comes from all-renewable sources — the wood-chip-fired McNeil Generating Station, hydro and wind — rather than fossil fuels. So the Burlington Electric Department, which also serves as the city's energy-efficiency utility, is incentivizing such carbon-reducing measures with rebates. Of our total bill, $6,900, BED rebated $4,500.

That made me feel good, of course. But, considering that the built environment accounts for 39 percent of the world's greenhouse gas emissions, according to the United Nations Environment Programme, it's a drop in the bucket. A more comprehensive approach to reducing buildings' fossil fuel use and carbon emissions is urgently needed. And that's increasingly the focus of Vermont's architects.

The state chapter of the American Institute of Architects, AIA Vermont, has committed to reducing climate change through two initiatives that mirror the national organization's efforts: the Committee on the Environment, or COTE, a group that researches and advocates for green building techniques; and the AIA 2030 Commitment, a pledge that all new buildings will be net-zero by 2030. (Nine Vermont firms have signed on to the latter.)

Nest talked to leaders of these efforts about the latest climate-change-reduction measures, including the biggest one possible: no new buildings at all.

By far, the most effective ways to reduce a building's energy use are by increasing its envelope insulation and making it tighter through sealing air leaks, according to Megan Nedzinski, who cochairs COTE-VT.

Vermont's energy building codes, both residential and commercial, are "actually pretty good," she says, but COTE's advocacy at the Statehouse led to 2020 versions requiring increased levels of insulation and tightness, and the latter now must be tested in commercial buildings.

Architects are also beginning to take into account carbon-dioxide emissions caused by the manufacture of materials — known as embodied carbon. Nedzinski practices with Vermont Integrated Architecture in Middlebury, which she describes as "a mission-driven firm on high-performance buildings and low-embodied carbon."

For instance, not all insulation is created equal. Nedzinski advises against high-embodied-carbon foam board (aka blue board or XPS for extruded polystyrene) and spray foams, which can use blowing agents with a high potential to increase global warming. Instead, she recommends blown-in and dense-pack cellulose, made from recycled newspaper and reconstituted wood pulp. "It's not fancy or expensive, it outperforms fiberglass, and it's readily available," she says.

Eric Morrow, who has a solo practice in Burlington, notes that architects are shifting from using steel framing — an energy-intensive product, from mining the ore to manufacturing the beams — to mass timber. One emerging type of mass timber is cross-laminated timber, or CLT, which consists of glued or nailed layers of wood. Mass timber products have less embodied carbon than steel but are just as strong. 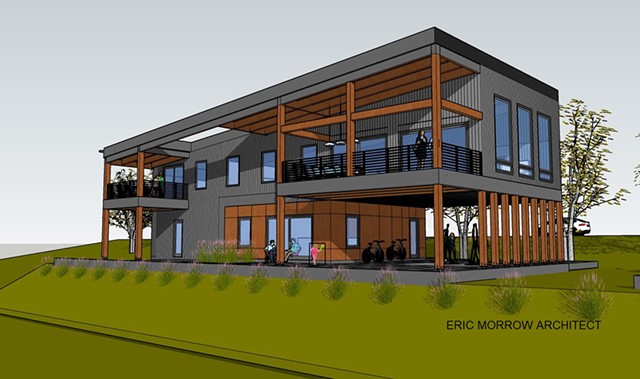 Morrow is an expert in passive-house design — the super-insulated buildings that use energy even more efficiently than net-zero houses, which merely produce as much energy as they use. For a passive-house design in Charlotte that will be built in the spring, he designated using mass timber and prioritized placing windows where they can capture heat from sunlight.

Nedzinski generally advocates for using local materials — "things that grow and things that are close to home. I think a very, very cool thing about practicing in Vermont is that we have local mills, stone yards, [and] this stock of craftspeople who work with their hands and are very good at it."

Morrow adds, "We should be making CLT right here in Vermont."

Climate-aware design in Vermont is limited because it's largely the choice of building owners. The energy building codes are mandated by state statute, but few towns have the resources to enforce them. The state requires that multifamily and commercial buildings be architect-designed but does not require the same of single-family homes. And contractors, who don't have to be licensed in Vermont, are sometimes unaware of or unable to execute efficient designs.

For those reasons, Morrow has pursued public advocacy. Calling himself a "local citizen-architect," he cofounded and serves as steering committee chair for the Burlington 2030 District — an agreement among 22 cities nationwide to ensure that all new buildings are net-zero and all existing buildings are at 50 percent energy use by that year.

In part because of Morrow's efforts, Burlington code now requires that all large-scale projects in the downtown core be certified LEED Gold, net-zero or passive house. And, as a Burlington Design Advisory Board member, he often suggests that building designs incorporate the possibility of solar to "give the owner a chance to consider it."

"I think the unsung story is about policy advocacy," Morrow declares.

Matt Bushey, an associate principal at TruexCullins in Burlington, points out that the costs of energy efficiency have decreased significantly in the last 10 to 15 years. After signing on to the AIA 2030 Commitment last year, his firm began to use 3D modeling software that predicts energy use and facilitates redesigns to reduce that usage.

His most recent project, a Community Bank branch in Williston, is an all-electric building that will have almost no energy costs yet doesn't have solar panels. "We exceeded the energy code just through careful attention to craftsmanship," Bushey explains. "It's just about quality construction and a better understanding of the building envelope. It's nice to know that practices are coming along such that we can achieve this without spending a lot." 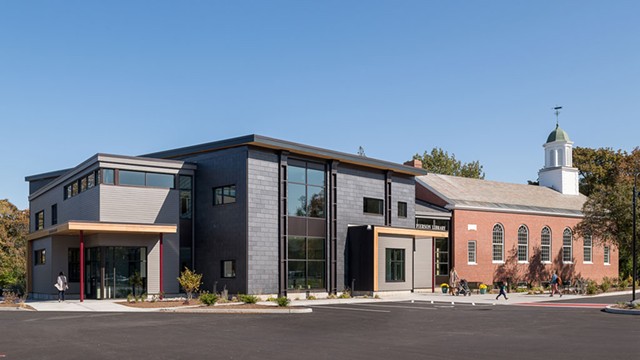 Bushey's colleague, principal Rolf Kielman, designed a moderately priced house for his daughter's family that is equally attentive to climate change. Built in 2018, Lewis Creek Cottage in Hinesburg is a 2,200-square-foot net-zero house that cost $440,000. Outfitted with heat pumps and a solar array with battery storage, the house uses no fossil fuels and has so far generated no energy bills, Kielman reports in an email.

Rep. Amy Sheldon (D-Middlebury), who spearheaded the Act 250 update and will continue efforts this legislative season, notes that Vermont is "losing forest land for the first time in 100 years.

"Although we are a state that is not growing, we are being parcelized and second homes are being built ... at a time when climate change is making the need for intact forests more urgent than ever," she says.

That's what architects need to remind clients who want their 10 acres and three-mile driveway.

Morrow says he recently turned down a job designing a four-unit apartment building in Winooski because the owner was not interested in investing in energy-efficiency measures. "It's tough. I don't think it's a big ask," he says. "The benefits are really big, and it doesn't have to cost a lot."

Architects can always educate, Nedzinski says. At her own Starksboro home, the builders handling a renovation recommended she "just pick up some blue board" for insulation. "It sparked this whole conversation," says the architect. "I think people in Vermont care, but if they don't know, they just don't know."