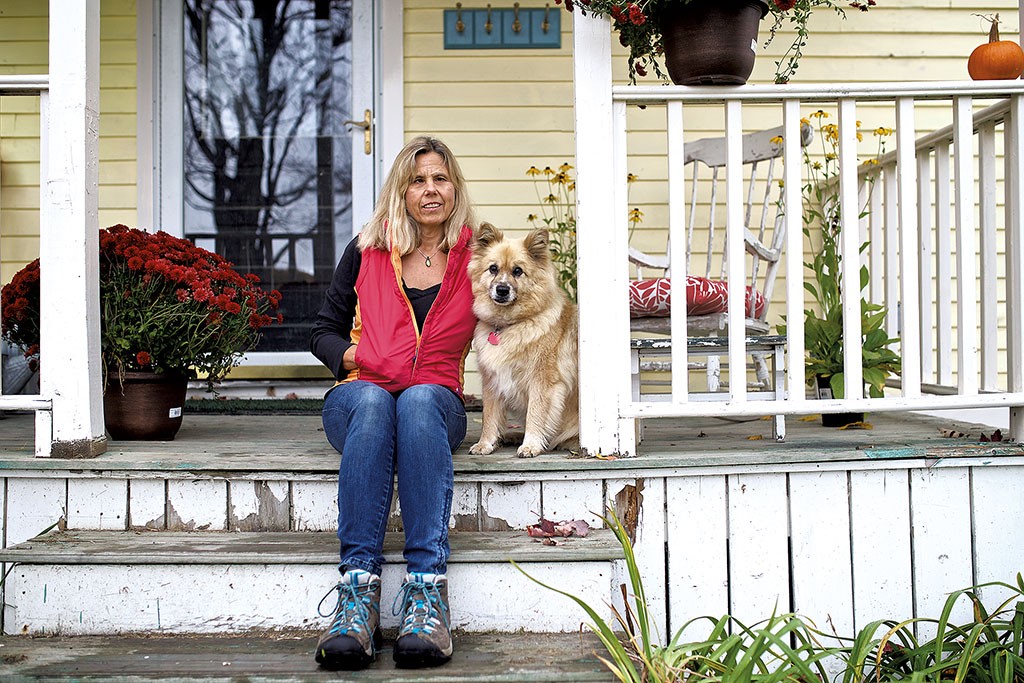 Jenny Carter vividly remembers the autumn day. She was out walking on a neighbor's property with her dog, Foxy, when "I heard this snap and a yip and looked to see what happened," she said. "And there was my dog, caught in a leg-hold trap."

The long-haired mixed-breed pup whimpered. Carter had to decide whether to run home for help or attempt to free the dog from a trap she had no idea how to operate. The trap, secured to the ground with a chain and a spike, had powerful springs that clamped smooth jaws on Foxy's leg.

It's a situation no pet should be in, Carter said, adding that Vermont could do more to prevent similar scenarios. In anticipation of trapping season, which starts Saturday, animal-rights advocates are asking for changes. They want the legislature to require trappers to report when they accidentally catch pets or endangered species, and post signs where traps are set on public land.

"One of the reasons I don't believe in trapping is because it's so indiscriminate. I have personal experience that backs that up," said Carter, a lawyer who lives in Randolph Center and volunteers with Protect Our Wildlife, the Stowe-based organization behind the drive. "There needs to be data collected so the state can make an informed decision about when and where trapping should be allowed."

He's president of the Vermont Trappers Association and believes that pet owners, not trappers, need to be more careful. For one, they should keep their dogs leashed, he said. Further, Baroffio added, illegal trappers are more likely than licensed ones to ensnare someone's pet. Critics don't distinguish between the two, he said: "All of us are made out to be evil, pet-murdering, Neanderthal thugs."

Earlier this year, POW partnered with the Center for Biological Diversity, a national group that seeks to protect endangered wildlife, to determine the extent of the problem. They made a public-records request to the Vermont Fish & Wildlife Department. The groups asked for emails employees exchanged with police, trappers and pet owners that mention traps capturing pets.

They also asked for emails related to the trapping of endangered species such as the American marten, a small weasel with round ears and a bushy tail. It's illegal to deliberately trap marten, and Vermont is working to reintroduce the species in the state. But current law doesn't obligate trappers who trap one accidentally to report the mistake to Fish & Wildlife.

POW received several boxes of printed emails and converted the data into spreadsheet form. They found references to 35 cases of trapped pets between 2009 and 2014, seven of which were fatal. POW also tallied 32 American marten trapped during the same period, 28 of which died.

"I think it's called a waste of resources and counterproductive if we have a species that's endangered, and we're allowing an activity that's harming them," said Mollie Matteson, a Richmond-based senior scientist with the Center for Biological Diversity. "There needs to at least be some significant effort to minimize that harm."

Fish & Wildlife commissioner Louis Porter said the POW numbers might include some double counting or misclassification. Some of the cases also appear to be neighbor disputes, Porter said.

The department's own tally shows 27 domestic animals caught in traps over the same 2009-2014 period. Most were dogs, and all but four survived. By the department's count, 22 American marten were accidentally trapped.

Brenna Galdenzi, executive director of POW, questioned whether either set of numbers accurately reflects the extent of the problem. Since reporting is not required, she said, "We really have no idea just how bad it is out in the field."

Porter doesn't see the need for better data collection or the mandatory reporting POW is proposing. That would take resources away from enforcement and other duties, he suggested. Signs would be cumbersome and ineffective. The department vigorously pursues and prosecutes illegal trappers, Porter added.

Trapping is not "indiscriminate," he said. The tension of the springs, bait type and location of the trap all assist in targeting specific animals. "Trapping is not only an important tradition in Vermont and elsewhere, it's a very, very important way for us to manage and regulate wildlife populations," he said.

Galdenzi gave up a career in corporate finance five years ago to move from suburban Hartford, Conn., to Stowe. A vegetarian who is active in the animal-rescue movement, she said, "Back in high school, I was the one wearing 'No fur' pins on my jean jacket."

She learned more about trapping through Vermont nonprofits — and started lobbying the legislature. Galdenzi worked to kill a proposal to allow snare traps that died last year in committee.

She launched POW this year to document trapping troubles and to lobby for changes. "I don't think we're ever going to see a day where trapping is going to be banned in Vermont," she said. "I like to have realistic goals."

Humans have long trapped animals for food and used their fur to stay warm. Native people traded pelts and fashioned them into clothing. Early North American settlers and explorers made fortunes trapping beaver, mink, fox, lynx and other fur-bearing animals.

Vermont trappers still sell pelts. About 900 people are licensed to trap, and state law allows them to take coyote, fox, mink, muskrat, raccoon, beaver, weasel, opossum, bobcat, skunk and other creatures. Each licensee must obtain permission from landowners to set traps, which must be tagged with his or her name and address. Property owners do not need state permission to trap on their own land, but toothed foothold traps and snares are illegal in Vermont.

Annual harvests vary depending on pelt prices and other factors. During the past 10 years, the largest harvest was 10,441 animals, in 2006-2007.

China and Russia are among the biggest buyers of North American fur, but when their economies are weak — as they are now — prices sag. Trappers such as Baroffio watch the global market carefully. When prices are high, he might get 20 percent of his annual income from selling pelts. Many Vermont trappers participate in two annual auctions, one of which is December 12 at Whitcomb High School in Bethel.

Baroffio said out-of-staters and city people are behind most of the opposition to trapping, hunting and gun rights in Vermont. The "antis," as he calls them, just don't understand a culture they weren't reared in.

Baroffio insists that trappers are respectful of their quarry. Licensing rules require trappers to check their sets every 24 hours, in most cases. Often, an animal caught in a modern leg-hold trap is found curled up asleep, whether it's a dog or a coyote, he said.

If it's a coyote or another intended catch, Baroffio said, he shoots the animal in the head to dispatch it humanely. If it's a dog, he frees it, and more often than not the animal is just fine, he insisted. "I had my own dogs caught in traps; I've caught lots of dogs in traps and let them go unharmed," he said. "I have never had a dog caught in a trap be injured. And I've been doing this since 1973. You just pat them on the head and off they scamper."

POW acknowledged that some dogs do survive the ordeal. But the "summary statement" on its spreadsheet described other outcomes: when dogs were killed in illegal snares, died in traps that hadn't been checked in a timely fashion, were shot by trappers who couldn't get the frantic animals out, or had to be euthanized because a limb was so badly damaged.

Baroffio acknowledged that some trappers break the law. "There are stupid people out there in all walks of life," he said. "They seem to vote and breed like rabbits, but there's not much we can do about it."

He added that some proposed changes, such as requiring trappers to put up signs, make no sense. "Dogs can't read," he deadpanned. But thieves can. "Why don't you just put a sign up that says 'come steal here.' Traps are valuable," he said.

It's been four years since Carter's ordeal, but she can still recall every detail.

Worried Foxy would panic and injure itself, Carter hunkered down and tried to open the trap. Initially Foxy was so upset that Carter thought she might get bitten, but it didn't happen. Carter recounted: "The entire time I tried to figure out how to get her out of the trap, she was licking me, which even now just about makes me cry."

She freed Foxy and carried her, running, for 10 minutes back home and took her to the vet. "She just had a really bad bone bruise. You could see it sort of mushed her." Foxy recovered.

Carter had permission to walk on the land where it happened. She still strolls there, but not during trapping season, and "I learned my lesson to keep her on a leash," she said.

The neighbor, a farmer, had given a trapper permission to catch coyotes. When he heard what happened to Foxy, the trapper came by and apologized — a gesture Carter said she appreciated. But it didn't change her mind about trapping and how it needs to change in Vermont.

Foxy recovered, but not all pets do, she said: "She's one of the lucky ones."