Vergennes' 3 Squares Moves Up the Street 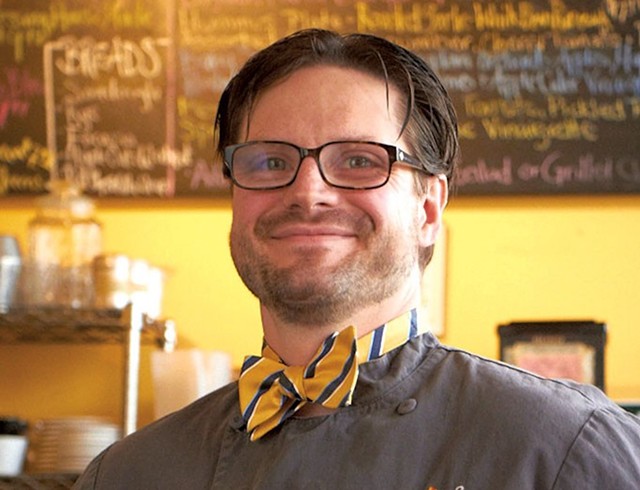 What happens when you decide to move your café one block north? For 3 Squares Café in Vergennes, it means rolling everything from chalkboards to chairs up the street. Come mid-March, the popular casual spot will relocate from 221 to 141 Main Street.

According to owner Matt Birong, the change has been a long time coming. After nine years of business, the café has outgrown its current space. "Take a look at my kitchen," Birong says, gesturing to a space the size of a cubicle. "I need more elbow room."

Initially, he was set on building downward, renovating the basement into a kitchen. To that end, he tried to buy the space he was renting, but the deal fell through. Then a friend, Jason Farrell, discovered a place up the street. Formerly home to Luigi's Italian Specialties, the space was about the size of Birong's current location but had something Farrell wanted Birong to see: an extra back room.

"He drug me by the ear," says Birong with a laugh. But the moment he saw the back room, he was sold. He remembers thinking, Holy shit, this could work.

Birong says the new space will solve one big problem of 221 Main Street: the distance between the small prep room and the kitchen. Every time the cooks need something, he says, they have to elbow their way through the crowds and back again. The new space will have an extra-large prep room connected to the kitchen, offering more flexibility for catering work during normal hours.

While a big move like this can be nerve-racking, Birong says, he's excited. He expects to close 3 Squares for three or four days in March while he transfers equipment and furniture to the new space.

The original print version of this article was headlined "More Brunch, Less Crunch"