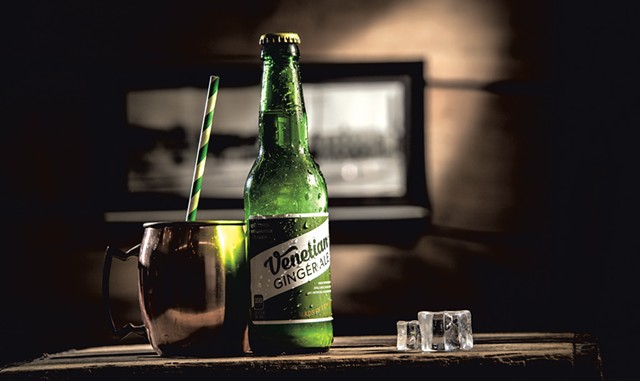 More than a century after Michael C. Dorn created the original Venetian Ginger Ale that gave Burlington's Soda Plant its name, Venetian Beverages is expanding its footprint at the hot spot on Pine Street. Justin Bunnell, Dorn's great-great-grandson, brought the Venetian brand back to life in 2017. Next spring, he'll open the Venetian Soda Lounge in the former CO Cellars space in Suite 122.

The Venetian Soda Lounge will be part experimental lab, part old-fashioned soda fountain, Bunnell said. It will serve Venetian's traditional ginger ale, as well as inventive syrups made on-site and at A Drop of Joy in Williston, where the bottled soda is currently produced.

"It's going to be a workshop of flavor," Bunnell said.

The lounge will feature a traditional soda fountain-style carbonator that staffers will use to "jerk" drinks to order, combining freshly carbonated water with flavored syrups and stirring with vintage copper barspoons.

Both mocktails and mixed drinks featuring Vermont spirits will be available. A menu of finger food is in the works with input from a "board of local chefs," Bunnell said.

The space will be family friendly during the day, serving nonalcoholic drinks, soda floats and coffee floats — a collaboration with next-door neighbor Brio Coffeeworks. A new shared bar will connect the two businesses, separated by a garage door that can be raised to expand seating during events.

Bunnell, who is also a filmmaker, plans to build a stage that will host local musicians, film screenings, comedy, poetry, speakers and even karaoke.

"It's going to be very collaborative," he said. "We're lucky to be in the Soda Plant because of all of the great flavors that are already here."

The original print version of this article was headlined "Future Fizz"