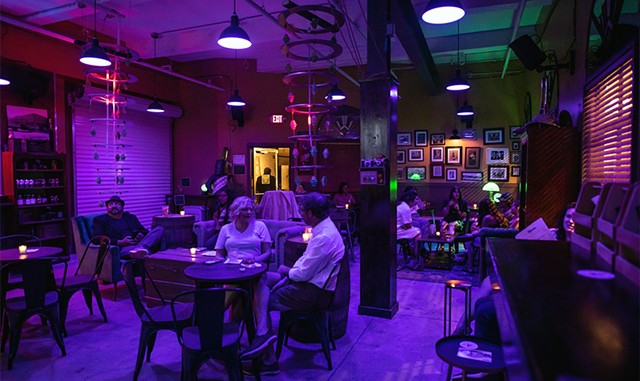 Nostalgia is big in the food and drink world right now. Restaurants across the country are embracing midwestern casseroles, blooming onions and wedge salads. In May, the New York Times predicted that the Dirty Shirley — a vodka-spiked version of the childhood classic — would be the drink of the summer.

The new Venetian Soda Lounge in Burlington's Soda Plant takes nostalgia back even further — to the late 19th and early 20th centuries. The lounge is a family-friendly soda fountain by day and a Prohibition-themed speakeasy with boozy drinks by night, and it opened just in time for the South End Art Hop.

The launch of the lounge in late August was a full-circle moment for Venetian Beverages owner Justin Bunnell and for the soda brand itself: The Soda Plant was Venetian's original home back in 1917.

Early visitors to the Soda Lounge, which occupies the former CO Cellars space at Suite 122, were greeted with a video recounting Venetian's history. Bunnell made it wearing his other hat: video producer and owner of RetroMotion Creative.

"Our story takes you on an adventure from continent to continent across a great vast sea," the video begins. At the turn of the 20th century, Michael C. Dorn — Bunnell's great-great-grandfather — immigrated to the United States from war-torn Europe. Dorn opened a café in Burlington, where he was known as "the master of the silver shaker," whipping up intriguing aperitifs.

Prohibition halted Dorn's cocktail shaking, but "his ingenuity allowed him to pivot," the video continues. He began experimenting with carbonated beverages, creating his Venetian Ginger Ale. Dorn and his three sons then launched M. & F.C. Dorn Bottling and headquartered their plant at the building now known as the Soda Plant — a nod to its beverage heyday.

Sales of Dorn's ginger ale spread throughout the Northeast until, "just as sure as fizz in a soda," the video recounts, the company pivoted again during World War II. This time it switched to co-packing and beer distribution, and the Venetian brand was "forgotten to history."

Bunnell revived the brand in 2017, creating a ginger ale inspired by his great-great-grandfather's recipe. Bunnell had grown up hearing stories about the family business — including tales of bootlegging during Prohibition.

He was fascinated by a photo that hung in his grandparents' Milton home when he was a kid.

"When we had breakfast after staying overnight, I was always like, 'Look at these Mafia guys,'" Bunnell said of the photo depicting a group of men in three-piece suits in front of the original Pine Street plant. "It's always inspired me as a filmmaker and storyteller." 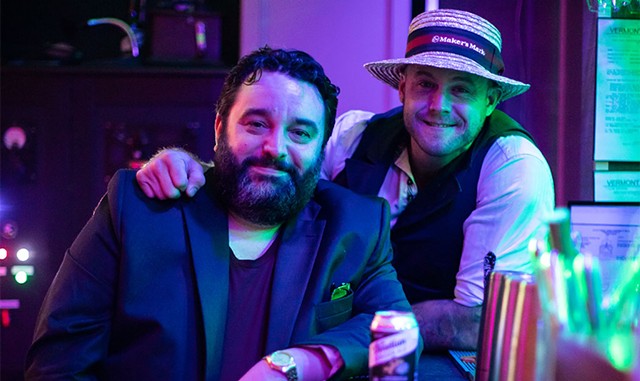 Originally, Bunnell just wanted to make videos about the soda. But people liked his take on the spicy ginger ale, made with organic ginger juice, lime juice, cane sugar and cinnamon sticks. So he went bar-to-bar and store-to-store around Vermont to sell it. The soda is now carried by four distributors throughout New England.

Bunnell inherited a box full of historic Venetian beverages memorabilia when his grandfather passed away. The photos, marketing materials and even an original root beer bottle — with soda still in it — are on display at the Soda Lounge. Mike Turner of the Barre-based Arcana Workshop, who builds props for RetroMotion Creative's videos, constructed sculptures and added faux-mirror arches above the windows to give the space an art deco feel.

A piano sits in front of the video screen, ready to host a regular roster of local musicians and other entertainment focused on era-appropriate jazz.

Venetian Beverages has partnered with the lounge's next-door neighbor, Brio Coffeeworks, to expand and share each business' space. A garage door separating the two will be open during the day so that Brio's patrons can grab a couch in the Soda Lounge to enjoy their coffee. At night, Soda Lounge customers can spill into Brio's shop; a new bar space between the two, which Venetian Beverages is subleasing, will allow bartenders to serve on both sides.

The collaboration extends to both companies' menus, too. For the Soda Lounge's soft opening, Brio offered the Nice Neighbor, a special espresso Dark 'n' Stormy made with Venetian Ginger Ale and a double shot of Brio's Calypso espresso blend. The drink was served over ice with a maraschino cherry and finished with an aromatic spritz of Spicy Ginger Mist from another Soda Plant biz: Alice & the Magician.

The Soda Lounge's cocktail menu features a play on the ubiquitous espresso martini. Called Jetfuel, it's made with Brio's flash-chilled espresso, vodka from Black Flannel Distilling in Essex and Amaro Averna.

"If it wasn't for Brio, for [cofounders] Magda and Nate [Van Dusen], we would never do this," Bunnell said. "The collaborative efforts of the Soda Plant are awesome."

Bunnell also credited Soda Plant owner Steve Conant for his work in bringing the space back to life as a small-business hub. In recent years, the founder of Conant Metal & Light has turned the old bottling plant into an exciting entrepreneurial incubator, bringing in businesses such as Brio, Tomgirl and Pitchfork Pickle.

"I remember my grandfather saying this place was a piece of shit," Bunnell said with a laugh. "But Steve had the vision." Once more businesses began opening at the Soda Plant in 2019, Bunnell understood Conant's vision, and returning Venetian to its original home "made perfect sense," he said.

Beyond its role as a drinking destination, the Soda Lounge is also a testing ground for future Venetian Beverages flavors. All of the Soda Lounge's syrups — from blueberry pie to maple cola to six-spice pineapple — are made in-house in small batches, many from local ingredients. Whatever's most popular, Bunnell said, will go into cans for distribution.

Like at any good soda fountain, the fizzy drinks are jerked to order. The bartender adds housemade syrups to a glass and then hits it with bubbling water from the bar's carbonation tower. Customers can order a soda float: a dollop of vanilla or chocolate creemee on ginger ale or any other jerked soda. Creemees are also available on their own or in a variety of mudslides, from traditional to the Espresso Slide, which includes Brio's espresso, vanilla vodka, Carolans Irish Cream, cream soda syrup and vanilla creemee.

Seeking something savory? The food options include simple cheese boards, pretzel sticks, and a menu of classic franks, sausages and veggie dogs. 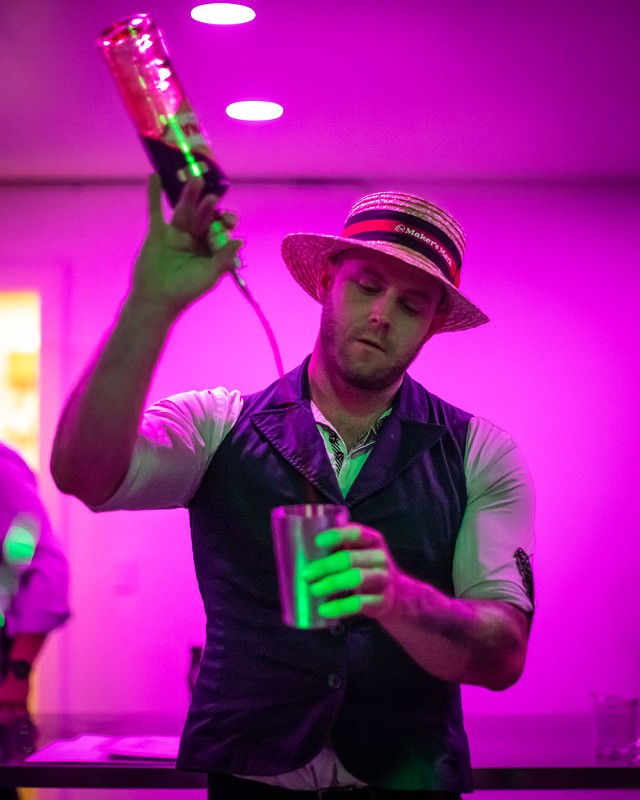 Most of the soda syrups can also be transformed into cocktails. Lemon-tarragon syrup goes into a twist on the classic Vesper; strawberry syrup amps up the Art District Daiquiri; and blueberry pie syrup sweetens the Southend Blueberry.

"It's like the soda shop's the front for the speakeasy," Bunnell said.

The man transforming the syrups is Liam McCurdy. A week before the Soda Lounge's soft opening, McCurdy was behind the bar, decked out in suspenders and a straw boater hat. The longtime bartender already embodied the energy of an old-timey soda jerk — a role Michael Karl Witzel called "the pop culture star of the Gilded Age" in his 2002 book The American Drive-In Restaurant. A skilled jerk was a "consummate showman, innovator and freelance linguist," Witzel wrote.

"You won't be a success in the hospitality industry unless you're truly hospitable," McCurdy said with a smile, as he jerked sodas and shook cocktails one by one, until the bar was a rainbow of beverages, both bubbly and boozy.

Bunnell sipped one of McCurdy's syrup experiments, a raspberry cream, as the two discussed how it could transform a mudslide or a daiquiri — or whatever their customers dream up, from soda to spritz.

"Making something like this is kind of like directing a movie," Bunnell said. "You're directing an experience for people. And I really want them to enjoy the nostalgia."