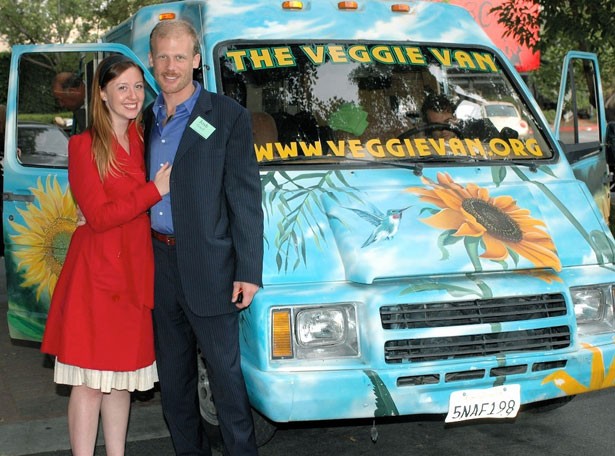 Josh Tickell's new film Fields of Fuel is a documentary, but it's also an adventure story. It chronicles his cross-country journey in a van that runs on veggie oil.

In it, the 32-year-old author, public speaker and energy expert uses his "veggie van" tour to show how our dependence on oil is damaging our democracy and spoiling the environment. But Tickell also aims to inspire - he shows audiences that it's possible, right now, to drive cars powered by something other than gasoline.

Fields of Fuel will be one of 16 entries in the documentary competition at the Sundance Film Festival in Utah next month. Distributors including Sony and Lion's Gate have already expressed interest in the film. Vermonters will get a sneak peek at it on Friday, December 28, during two showings at Merrill's Roxy Cinemas.

Tickell is bringing his film to Burlington because he hopes to raise money for a national tour for Fields of Fuel next spring. But mainly he'll be in town to visit his fiancée's family; he's engaged to actress Rebecca Harrell, who grew up in Hinesburg. The two currently live in Venice, California.

Tickell's interest in alternative energy stems from witnessing environmental degradation firsthand. "I grew up in Louisiana very close to oil refineries," he says. "I watched the pollution in my home state everywhere, in the rivers, in Lake Pontchartrain where we lived, and on the land. We have 150 petrochemical facilities there in a 100-mile area. It's called 'Cancer Alley,' because the pollution is so severe, there's a very high rate of cancer.

"From being a young kid in that environment," he adds, "it was just very obvious to me that there had to be other ways of making energy without hurting people or plant life or water."

In college, Tickell spent a semester abroad working on an organic farm in Germany, where he saw farmers growing and using veggie oil - also known as biodiesel - for fuel. He began researching biodiesel, and in 1997 and 1998, he made his first cross-country trip in the veggie van. He garnered mainstream media attention, appearing on "The Today Show," The Discovery Channel, CNN and in the pages of Maxim magazine. During the trip, he researched his first book, the 2000 manual From the Fryer to the Fuel Tank: The Complete Guide to Using Vegetable Oil as an Alternative Fuel. He also made a 12-minute film about the journey called "The Veggie Van," which is viewable online.

After the publication of his book, Tickell decided he'd reach more people by making a movie, so he went back to school to study filmmaking. He earned a Master's degree in film from Florida State University.

Fields of Fuel is the fruit of his labors. The 90-minute nonprofit doc features footage from a second trip in the veggie van, but it also includes interviews with farmers, auto executives and celebrity activists such as Larry Hagman, Neil Young and Woody Harrelson. And it introduces a potential new fuel source: algae. "Algae are really the next generation of biofuels," Tickell explains. "Algae produce faster than any other living organism on the planet. For a field of soybeans, you basically wait a year for the soybeans to grow. With a field of algae, you wait two hours."

A film about algae doesn't sound so enticing - actually, it sounds kind of gross - but Harrell claims it's inspiring. The 27-year-old actress, who launched her career in 1989 when she starred in the movie Prancer, is working as Tickell's director of marketing. She's convinced Fields of Fuel will move audiences to take action. At a screening in Carmel earlier this month, she says a woman approached her and told her she'd be buying a diesel car and running it on biodiesel. "People really do have a transformation happen when they watch the film," Harrell says.

Harrell has had a number of acting gigs over the years; most recently she appeared in the horror flick Sugar Creek. She was just offered a role in another horror movie, but turned it down. "I've turned in my acting career," she declares. "It doesn't at all represent who I am. This totally expresses who I am."

After the screening at Sundance, Harrell and Tickell plan to take the veggie van - and Fields of Fuel - on a 50-city tour. They'll start in Los Angeles on Earth Day, then drive to New York City for the theatrical release in May. They're currently raising money for the trip. You can follow their fundraising progress on their website, www.fieldsoffuel.com.

Tickell believes that if he can get a million Americans to see his movie, he'll be able to create a tipping point for biodiesel. He cites the success of Al Gore's An Inconvenient Truth as proof that movies like his can change the world.

And he points out that he'll be touring with the film during a presidential election year. "Our goal is to green the vote next year, using this film as the tool," he says. "So it's much bigger than just a movie."