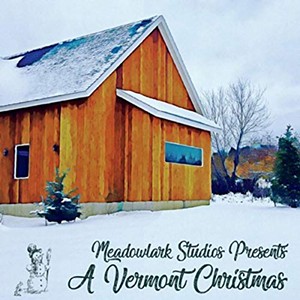 Everyone wants the big, glitzy present at Christmas. But the best Christmas presents are the ones you didn't ask for or even know you wanted. Like, for example, the Whirley Pop stove-top popcorn maker Santa gave me more than two decades ago that I still use. Every time I pop a batch, it's like my own little buttery Christmas miracle.

In a way, Christmas music is similar. Sure, you can fire up the classics by Nat King Cole, Bing Crosby, Ella Fitzgerald, et al. But sometimes the real treasures are the hidden gems, the new songs or the new versions of old standbys that you didn't know you needed but that you'll turn to year after year. While not every track quite hits home for the holidays, the new compilation from Williston's Meadowlark Studios, A Vermont Christmas, offers several such unexpected Christmas treats that could well become beloved local favorites.

The record opens with Josh Panda's take on "Christmas (Baby Please Come Home)." As ever, the vocal dynamo is his typical showstopping self. But whether you find his version naughty or nice may depend on how you feel about, of all things, Steely Dan. Inexplicably, Panda replaces the original's classic sax solo with the instrumental bridge from "Reelin' in the Years."

The DuPont Brothers' "Silent Night" is next. Over lilting, slack-key-like acoustic guitar, the duo dovetails angelic harmonies that recall another fraternal group: the Mills Brothers. It's a placid, gorgeous rendition.

Kat Wright and Brett Hughes, who are something like Burlington's twangy answer to Ella Fitzgerald and Louis Jordan around the holidays, follow with a high, lonesome version of "Blue Christmas," complete with some nifty whistling in place of the song's signature "oohs."

"Have Yourself a Merry Little Christmas" by Reid — aka Reid Parsons — is the surprise hit of the record. Using just fingerpicked acoustic guitar and voice, the singer quietly imbues the Christmas standard with palpable longing and sweetness.

The comp's penultimate cut, "The Christmas Song" by Meadowlark Studios owner Yasmin Tayeby, is another quiet gem. Built around slinky jazz guitar, trumpet and voice, the cool, lounge-y track could almost pass as a lost Chet Baker outtake. The tune's inviting calm is somewhat broken by the bouncy rendition of "Joy to the World" that closes the album by the University of Vermont vocal group the Hit Paws. But, hey, what's Christmas without the occasional a cappella carol?