Vanpooling in Vermont: Why and How | News | Seven Days | Vermont's Independent Voice

Vanpooling in Vermont: Why and How 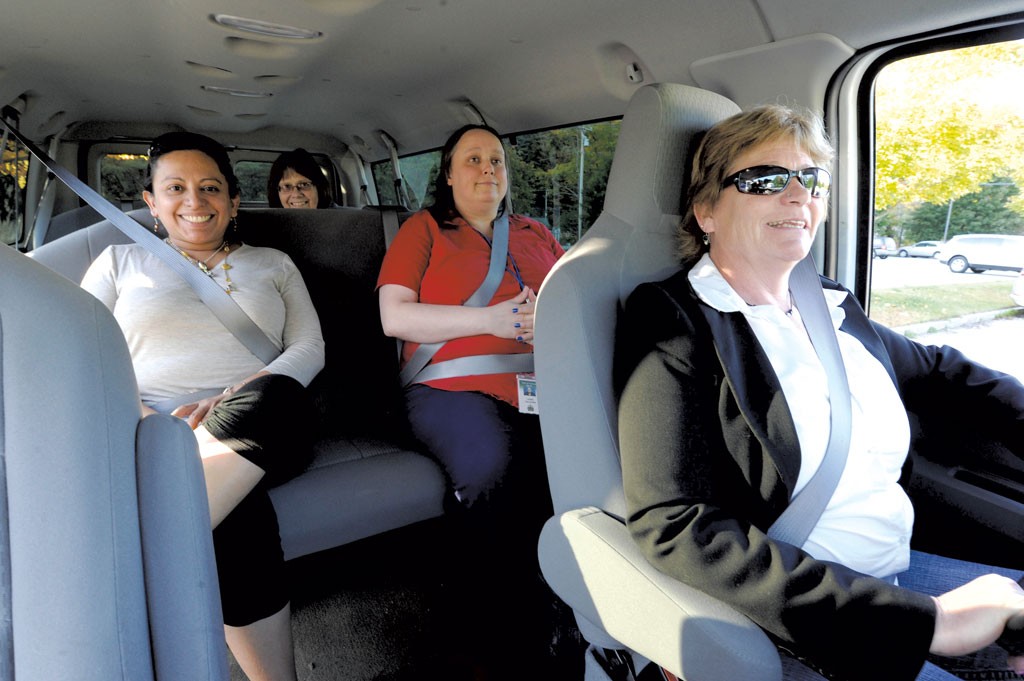 On September 21, hundreds of thousands of people descended on New York City for what was called the largest climate-change march in history. The air swirled with conversations about fuel efficiency, energy policies and the relationship of economic and environmental health. Back home in Vermont, such conversations are nothing new at the Agency of Transportation. For several years, VTrans has been pushing for local transportation solutions that address citizens' concerns about both their economic livelihood and their environment.

Offering a suite of services, the state aims to minimize the number of vehicles on the road, increase fuel efficiency and change the way Vermonters consider their daily commute.

Though vanpooling debuted in Vermont in 2009, many locals may never have heard of the practice. It's like carpooling, but with a bigger vehicle and government help. Go! Vermont is a project of VTrans whose mission is to help Vermonters "reduce the cost and environmental impact of driving." Working in collaboration with vRide, a national vanpooling company, Go! Vermont currently provides commuting vans to 11 different groups of seven to 12 people each. Vanpoolers pay a monthly rate based on mileage — for Vermonters, it averages $120 per person per month. That cost covers the use of the vehicle, gas, repairs and insurance.

For most users, that's a great deal.

"When I drive my car to work, it takes a quarter of a tank of gas per day," says Wendy Edwards, an administrative-services coordinator for the State of Vermont, who has vanpooled for three years. "I fill up twice per week, so that's about $120 per week. The most we've ever paid per person for the vanpool is $130 per month. So just in gas alone, it's a huge savings."

Edwards and the 10 colleagues with whom she shares a 12-passenger van commute 35 miles each morning from Montpelier to Williston. While she acknowledges that having fewer vehicles on the road means less pollution, she says she uses the service primarily for its economic benefits.

It's not like Edwards or other Vermont commuters can just jump on a bus anytime. Though public transportation does exist along the state's major corridors and within its larger towns, a huge portion of the state doesn't fit into a bus-stop model.

"We know that we aren't going to be able to provide for anyone to go anywhere at any time that they want," MacDonald adds, "but we've found that an effective way of filling in those gaps is through carpools and vanpools."

Although Edwards' commute up Interstate 89 overlaps with a bus route, she still prefers the vanpool. "I've looked into the bus service, and it would be more expensive," she says. "I would have to [ride] all the way to Cherry Street [in Burlington], and then I'd have to get on another bus to come here, and then walk about half a mile. It just doesn't work."

The benefits of vanpooling extend beyond the bottom line, according to MacDonald. In surveys, users have reported being surprised "by how much they've enjoyed starting the day and ending the day [with others], where they can vent, share work experiences and mentally prepare to transition in or out of the work environment," he says.

In a recent nationwide vRide study, MacDonald notes, 96 percent of vanpoolers said they plan to use the service again in the coming year.

Bonus: These riders get to practice "good citizenship," as MacDonald puts it. "Everybody is cutting down on tons of carbon dioxide and NOx [nitrogen oxide] emissions. So from an environmental, social and cost-benefit perspective, it's all a win."

Then why aren't Vermonters seeking out vanpools in droves?

MacDonald acknowledges that the service works best for those with a set work schedule and the same workplace each week, an arrangement many Vermonters don't have.

"It's a commitment," says Edwards. "And the hardest part for people is that they have to give up a bit of their freedom to come and go as they please."

Fellow vanpooler Dave Gorham finds this to be the major hurdle in his struggle to recruit fellow riders. "Some people just will not give up that independence," he says. A facilities technician at IBM, Gorham coordinates a roughly 38-mile vanpool from Johnson to Essex Junction. "People today want things now, and they don't want to wait around to get a ride or to leave the office," he says, "no matter what their transportation costs are."

Gorham has used the Go! Vermont service for two years, and has been sharing rides to work since 1990. "It would be very hard for me to give it up now," he says. "I'd have to go out and buy another vehicle. It would be a financial burden on our family to do without the vanpool."

He suggests another reason more people don't try vanpooling is that they consider their transportation budget an unavoidable cost. "They always say money talks, but people don't look at the money going out of their wallet for transportation," Gorham observes. "For some reason, they write it off as something they have to spend. I don't think they take into account what it's really costing them."

Go! Vermont supports the vanpool service by subsidizing $700 of each vanpool's costs with federal funding, as well as by coordinating outreach statewide. Employers also promote the service in a variety of ways. Autumn Harp in Essex Junction, for example, pays for the entire vanpool service as a benefit to its employees, some of whom live near the company's former headquarters in Addison County.

Other employers incentivize vanpooling use with a subsidy or a choice parking spot for the van, or by inviting a Go! Vermont representative to the office to speak with workers about how and why to share vehicles. Vanpoolers and their employers are eligible for commuter tax benefits.

Vanpooling is just one of many efforts by the state to promote accessible, affordable and environmentally sustainable models of transportation. Go! Vermont provides matchmaking services to people with similar commutes, and offers information on its website about bus schedules, park-and-ride locations, electric vehicle plug-in sites and tips on fuel economy. These efforts — along with recent projects such as the $1 million expansion of the Richmond park-and-ride — are slowly helping Vermonters shift and optimize their approach to commuting.

"We do see more people carpooling when we look at census data," MacDonald says. "We see more vanpools. We see more telecommuting. We see more shared trips and combined trips." He cites a recent downward trend in overall miles driven in Vermont, a figure that had been steadily increasing over the previous 50 years.

"At the end of the day," MacDonald says, "the No. 1 capacity we have in transportation is the empty seats in our cars. If we can tap into that and take a smarter approach, we can really cut some costs and improve our transportation experience."

While big ideas are bandied about at major summits like the one in New York, MacDonald and Go! Vermont hope that more and more Vermonters will choose to act locally, sacrifice a bit of freedom and embrace a practical commuting model for the sake of their pocketbooks and their planet.

Learn more about vanpooling, other ride shares and public transportation at connectingcommuters.org.