Van Phan carefully places two pool balls on a table in a South Burlington billiards hall. The arrangement would make it tricky for anyone to knock the ball into a side pocket. It takes her a few tries, but she nails it as the ball slams authoritatively into the hole.

Phan plays like a boss because she is the boss: It's her pool hall. Van Phan Billiards & Bar will soon celebrate its 11th anniversary. That's nearly twice as long as Phan's reign as the women's billiards champion of Vermont, a title she last held in 2009. These days, Phan spends most of her time mixing drinks at the bar, but she's happy to leave her post to offer advice to other players, who would do well to take it.

More than once, Phan uses the word "passion" in speaking of her relationship with billiards. When she tackles a difficult trick shot, she seems physically incapable of relinquishing her cue until she pulls it off.

Van Phan, 39, says she was about 10 years old when she first picked up a pool cue. Her family ran a games parlor in her native Saigon, so she figures it was inevitable. They even had a table right in her home. Still, she had to hide it from her parents because young girls weren't supposed to play pool. Phan's opponents were often adults, the stakes cans of soda or candy bars.

She learned three-cushion billiards on equipment that was anything but top quality. "There were holes everywhere in the felt of the table," Phan recalls, adding that the playing surface wasn't made of industry-standard slate but of crumbly cement. "The balls would make holes on the table, the rails were dead, the cloth was slow," she says.

These inadequacies didn't stifle her fascination with playing pool. Phan is hard-pressed to articulate exactly what about the game appeals to her. It's not the mathematical precision, she says, nor the opportunity for competition. "I can feel the game," she finally concludes. "It's all about feeling for me. The cue ball is this little" — she holds up two outstretched fingers — "but you can make it dance on the table."

Phan came to Vermont with her mother and siblings in 1992, beneficiaries of a federal program that extended relocation assistance to Vietnamese citizens displaced by the Vietnam War. "The [Vermont Vietnamese] community was very small at the time," Phan says — nothing like the mini melting pot it is in the U.S. today.

She has never known her father, a Vietnamese citizen who served with American forces during that conflict. His official status: missing in action. "He could have been killed in the war, or he could be here somewhere in the United States, or he could be somewhere..." Phan says, her voice trailing off.

Phan was 16 when she, her mother and three siblings moved to Burlington's Old North End and she enrolled in Burlington High School. She spoke only Vietnamese at the time; her now-excellent English, she says, is a product of her high school's ESL classes.

A few years later, at Burlington's since-shuttered Trinity College, Phan took courses in sociology and criminal justice. Initially interested in pursuing a career in law enforcement, she soon "fell off the wagon," she says with a laugh.

While Phan learned English and adjusted to her adoptive country, billiards fell by the wayside. It wasn't until 2000, when she took a bartending job, that Phan picked up a cue stick for the first time since leaving Vietnam. It was probably not a coincidence, she allows, that the job was at the now-defunct Burlington Billiards. "That's where I ended up spending most of my time," she says. 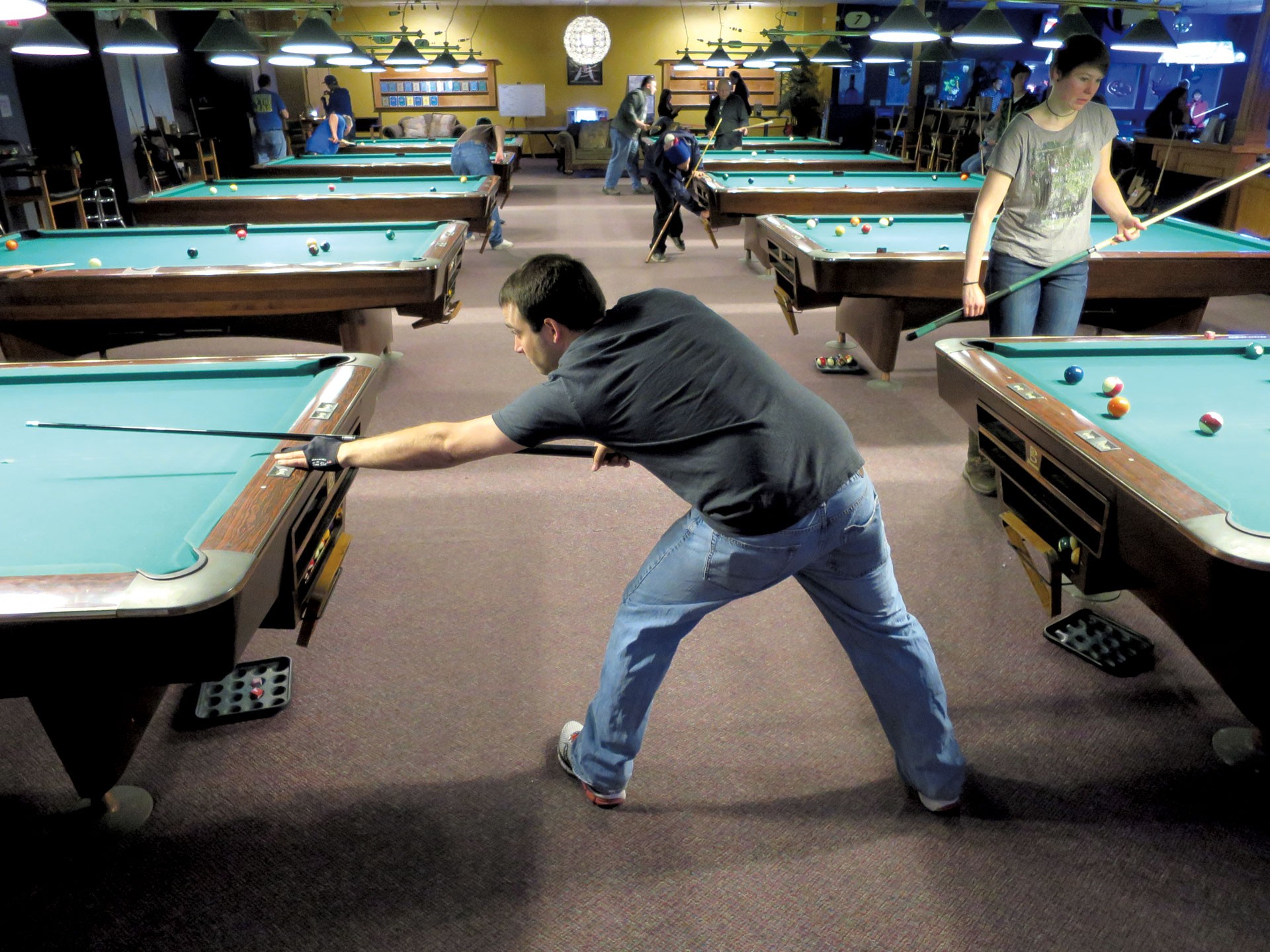 Despite a 15-year hiatus from the game, and the fact that it was pocket billiards rather than three-cushion, Phan says she felt comfortable immediately. "It came naturally for me," she says. Her game steadily improved.

Liz Ford played with Phan in qualifying and professional events as members of the Green Mountain American Poolplayers Association League. In an email, Ford recalls Phan's ease in making flashy bank shots. But it was Phan's ability to have fun among dour opponents, Ford says, that gave her a strategic edge: "She'd be joking around and having a good time, all the while sneaking out the win from under the other player's nose."

In 2003, on a regional women's billiards tour, Phan performed well enough that professional pool player Jennifer Barretta encouraged her to try out for the Women's Professional Billiard Association tournament in New York City. Barretta tells Seven Days via email that Phan "had some natural ability, and I could see how much she loved the game ... I immediately knew that Van had what it took to become a good player."

Thus emboldened, Phan jumped into national tournament play and was soon invited to the U.S. Open in Albuquerque. She won't say how well she played in her sole national tournament, but she admits that, in a field of 64, she didn't finish in the top 16, which would have qualified her for the next round.

In the years following that competition, Phan continued playing in state and regional tournaments but did not go to the nationals again. Her time was devoted to running her own pool hall, which opened less than a year after the 2003 closure of Burlington Billiards.

A photo on one wall of Van Phan Billiards shows the proprietor in the classic bow tie and vest attire of the pro pool player. Phan's current smart black suit — as well as the mean English spin she can still put on a cue ball — suggests that her passion for the sport hasn't diminished.

From the outside, the billiards hall is an unassuming 5,000-square-foot structure tucked in a corner of a bland shopping area just off South Burlington's Dorset Street. The hall's spaciousness is a necessity: Its front room has four 3.5-by-7-foot pool tables, and the main room boasts 10 regulation-size Brunswick tables, 9.32 by 4.65 feet each. The per-game rental on the smaller tables is $1.25; the bigger tables go for $7.50 per person per hour, or $12.50 per two-person team per hour.

Even with ample space between tables, there's room for a Ping-Pong table, a couple of foosball tables, trophy display cases and a few well-worn sofas. Just off the main room, a rentable private room has its own regulation table.

Phan cares for her tables like a conservator attends to historic paintings. And no wonder: The bigger ones cost about $14,000 each. She draws attention to the tables' Simonis cloth — high-grade stuff from a 300-year-old Belgian company. Along with rent and temperature control, the tables and their upkeep are the business' most significant expense. Phan explains that these costs are interrelated: If the temperature inside drops to a certain point, the rubber on the bumpers can become brittle with cold.

Plenty of bars in Vermont have a pool table or two, but Phan insists that Van Phan Billiards is the only true billiards hall in the state. (Dover's One More Time Billiards Parlor & Tavern sports six tables but is open only seasonally.) Even bars that offer billiards don't typically have regulation-size tables, without which you don't have a true billiards hall.

The Green Mountain APA league has convened regularly at Van Phan Billiards since 2011; its main room is lined with plaques commemorating members' victories. But even on league nights, Phan says, a few tables remain available for anyone looking to play.

Phan says that pool hustlers are neither welcome nor a particular problem at her billiards hall. And if they do show up, they're easy to spot, she says — and they're not tolerated.

Nowadays Phan doesn't hit the floor much, unless it's to offer a little coaching. She hesitates to even pick up the cue. "I'll forget that I'm supposed to be working," she says.