Compared with nearby Dover, Wilmington isn't exactly a ski town. But its main intersection sees plenty of traffic bound for Mount Snow and southern Vermont's other ski areas, all winter long.

"You pretty much have to turn here to go to the mountain, unless you're on the back roads," Justin Maturo said.

Close to that intersection, Maturo, Travis Charlow, David Wisniewski, and Brian and Chrystal Holt recently swapped out the 50-plus-year-old sign on a hard-to-miss landmark: the Old Red Mill Inn. This winter, their team will turn the imposing 19th-century mill building at 18 North Main Street into the home of Valley Craft Ales.

Valley Craft's first beers hit the market in July and are now sold in more than 30 Vermont shops, including three in the greater Burlington area: Beverage Warehouse, Shelburne Meat Market, and Pearl Street Pipe & Beverage. The brewery team currently produces Valley Craft's five core products — an IPA, an Italian pilsner, a porter, a Belgian wheat beer and a Vienna lager — at a friend's brewery in Connecticut while its own 10-barrel BrewBilt Manufacturing system is being built in California.

It will take at least six months for the custom brewhouse to be ready, Brian Holt said. When it's up and running, Valley Craft will make its low-alcohol, super drinkable brews at the Old Mill, and brewers Maturo and Charlow will expand their lineup to include more experimental offerings.

Bringing a brewery to town is only one of the Valley Craft team's ambitious plans for the historic mill building, which has been nearly empty since before the pandemic. On Friday, November 11, just in time for Mount Snow's opening day, the building will once again house an inn, as Valley Craft opens its first block of 10 upstairs rooms. Twenty-six are planned, with 10 rooms serving as workforce housing for area ski resorts. Also this month, Valley Craft will open a taproom, a casual gathering spot for beer and pizza in the front part of the building.

"If we were just putting a restaurant in here, it would be a hustle." Justin Maturo tweet this

Eventually, the temporary taproom will become Valley Craft's on-site brewery, fully visible through a set of interior windows. A large dining room overlooking the Deerfield River, complete with a round fireplace, will become the taproom. The team will revive popular outdoor hangout Jerry's Deck — named for former owner Jerry Osler, who bought the inn in 1988 with his wife, Sheila. Other future plans include a coworking space and an Italian deli and provisions shop in an attached former office.

"If we were just putting a restaurant in here, it would be a hustle," Maturo said. "Having the brewery — and having the inn at the brewery — people are going to be fired up. They already are."

"I never thought that I would be an inn owner," Brian said. "That was never on my list of dreams. But it's truly one of a kind that you have a building like this on the river. I think all of us always wanted this to be the spot."

Valley Craft isn't the first beverage-focused biz that the Holts have opened in the area. Brian and Chrystal learned about Wilmington when a friend told them about the Wilmington Works' Make It on Main Street business competition; they moved there from Helsinki, Finland, to open 1a Coffee Roasters in 2020. They've since added a second 1a Coffee location near Mount Snow and bought the building that houses Starfire Bakery, which supplies pastries to the coffee shops. In 2021, the couple received a Big Idea Grant from Swedish company Oatly, which they used to install solar power and enhance other sustainability measures at their roastery.

The Holts fell in love with the Old Red Mill building while scoping out the area in 2019. It was for sale at the time but wasn't right for 1a Coffee, which landed just outside downtown at 123 West Main Street.

Not long after moving to town, the couple met Maturo and Charlow at Deerfield Bar & Bottle and realized they shared visions of opening a small brewery. Maturo and Charlow, who had worked together at West Dover's Snow Republic Brewery, wanted to do something on their own. The team closed on the Old Red Mill in early August 2022.

"We had this idea that we could do something special in Wilmington and get back to doing what Justin and I wanted to do, which is produce a great beverage for people to come and enjoy in a cozy, comfy space," Charlow said.

"In the beginning, I never would have thought to be down here," Maturo added. "I thought we had to be by the mountain. But once we were here, I realized, Oh, shit. This is a sick spot." 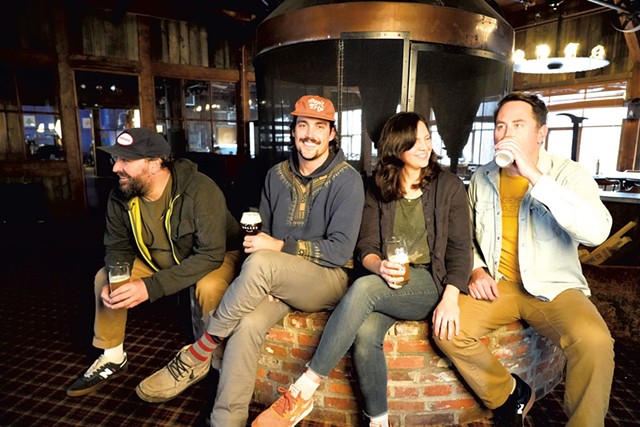 The Old Red Mill was constructed as a gristmill in 1828, then became a sawmill. The building is listed on the National Register of Historic Places as part of the Wilmington Village Historic District.

"Though the Deerfield River is no longer used for industrial purposes," the register's description states, "it contributes greatly to the aesthetic enrichment of the Historic District and, along with the Old Red Mill ... serves as a reminder of the town's early history and dependancy [sic] upon water power."

Over the years, the mill building suffered two fires; rebuilt, it became a restaurant in 1939, with lodging added in 1955. The Valley Craft team has been piecing together the building's history, as local residents stop in and share their stories.

"Someone told us the high school played their basketball games upstairs until the early 1950s," Maturo said. "That doesn't really make sense structurally, so it could be fake news."

Joe Namath ran football camps in Wilmington starting in the early 1970s. The Hall of Fame quarterback was said to stop in at the Old Red Mill and ring the large bell that still sits on the bar, Charlow said.

More verifiable stories include memories of the restaurant's beloved swordfish, prime rib and extensive salad bar. The latter won't return in its previous form — salad bars are a risky proposition in pandemic times — but the team plans to turn its copper base into a beer cooler on Jerry's Deck.

Valley Craft's Italian-style pilsner, Fetta di Casa, offers a strong hint of what will be on the taproom menu: An early version of the label was covered in pizza slices. The final can has a more streamlined look, but the team still loves pizza.

Both Maturo and Charlow grew up in the New Haven, Conn., area. While planning the taproom, they took the Holts on research-and-development trips to two of their city's signature apizza spots in their hometown, Frank Pepe Pizzeria Napoletana and Sally's Apizza.

The Valley Craft team won't call its pies "New Haven-style." But earlier this year, it took that inspiration into a 20-week-long Saturday pizza club at the Holts' house, developing an apizza-Neapolitan hybrid of its own.

At the taproom, the team will prepare a tight menu of basic and seasonal pies on a PizzaMaster deck oven — the "Lamborghini of pizza ovens," Brian said. Flour for the dough will come from King Arthur Baking, Italian cheeses from New Haven, cured meats from Olli Salumeria and tomatoes from Bianco DiNapoli. Brattleboro-based Food Connects will supply produce from Vermont farms.

The taproom will serve Valley Craft's core lineup of beer, several additional draft offerings and a soon-to-be-released Valley Craft cider made at Bennington's Little City Cider. In a nod to New Haven, the nonalcoholic offerings will be Foxon Park sodas, a classic pizza shop staple.

The Valley Craft team emphasizes that its new hangout is a brewery, not a "party zone," Maturo said. The taproom will be open from lunch to 8 p.m.

"We recognize that this is one of the few buildings in Wilmington that has this much space for people to gather," Chrystal said. "We're joining an existing microculture of restaurants, and, by not being open too late, we're staying in our lane."

As the Valley Craft team brings the mill building back to life, it's ready for the ski traffic — and to welcome locals back into the historic space.

"This building has been a home to many people in the community for one reason or another," Charlow said. "And they're excited for it to be reopened."

The original print version of this article was headlined "All Inn One | Valley Craft Ales revives a Wilmington landmark with beer, pizza and lodging"