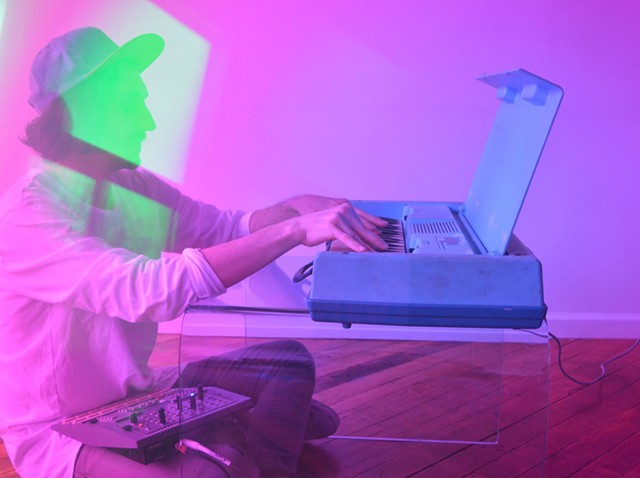 Depending on when listeners first discovered Kenny Vasoli, they might think of the Philadelphia-based artist either in terms of punk music or hip-hop-inspired electro-pop. That's because the 34-year-old found success with not one but two projects: the emo-adjacent early-2000s outfit the Starting Line, and the spaced-out, groove-heavy pop of Vacationer, which debuted in the early 2010s.

Though the Starting Line had a brief resurrection a few years ago, Vacationer is Vasoli's primary gig. Blending J Dilla-influenced production with flourishes of Tropicália and exotica, the band combines heavy sampled elements with live instrumentation. Its most recent effort, Mindset, is an even-keeled, meditative journey inward, an exploration of self in trying times.

To accompany the release, Vacationer rolled out a unique piece of merch: a custom cannabis strain, also called Mindset. Vasoli has spoken previously about using cannabis as a creative lubricant in his songwriting process.

Seven Days caught up with Vasoli by phone.

SEVEN DAYS: You've had several noteworthy, stylistically different projects over the years. I can envision some industry bigwig telling you to pick a brand already. Did that ever happen?

KENNY VASOLI: Never quite framed like that. Don't get me wrong: Industry bigwigs have definitely tried to steer me in directions all throughout my career — even recently. But I seem to have kind of hacked the system in that I just start a new band anytime I wanna try a different style of music.

I think what differentiates me from other characters from the pop-punk emo scene is that they seem to want to piggyback off that success and then be like, "Oh, I have this new band, but we're like a folk-core band." And then everybody's like, "I like your old band better." So I try to eliminate that stigma by just doing something and letting it stand on the music as much as it can. With Vacationer, I didn't even put my name on the first record, because I didn't want people to attach my old projects with the new one.

SD: In terms of your fan base, is there crossover between your projects?

KV: It's funny, because they sort of grew independently. The Starting Line really had its own identity and its own growth of a fan base. When I started Vacationer, I started making these records with people who generally didn't know my past. So they really were just looking to my ability as a songwriter, which was nice, because I wasn't being judged by my stuff from before.

And then, by the grace of God, we got a deal and got our music released. And then some people realized that I was the guy from [the Starting Line], and some people had known about that band and liked both. But it often comes out when they come to a show. They're like, "Hey, were you in another band?" I don't often cross-pollinate in terms of promoting both bands.

SD: I'm always impressed when a band with heavy electronic elements can successfully re-create the sound of their records onstage in a way that doesn't sound canned. What's challenging about that process for Vacationer?

KV: I think that's the biggest challenge with bringing electronic music to the stage in general. Even some of my favorite artists — I won't name names — but there are people who, at the heart of it, are a producer. And they try bringing it to the stage and I find that, even as much bass frequency or as many drums you layer into your computer, there's no way to replace the sound of a real drum kit and a real bass coming through an amp and a human playing it.

Having the human element present in our music is so important to me — being able to create a hybrid between live-band composition and electronic production. I think the big goal with this band is to create this seamless, Is that a sample, or are they playing that right now? I like to blur the line as to what's happening up there.

SD: I hear you are a major crate digger. What kinds of records do you usually look for?

KV: Oh, I like everything. I guess less rock records than anything. I like having a lot of jazz and soul and funk — like, instrumental hip-hop and stuff like that. I try not to go for anything too heavy on vinyl, because I don't think vinyl brings out the best in super-loud music. I do like [crate digging] to play around with samples. It started out kind of like that. But then I started getting records that were too good to sample. And then it just spun into this thing where I need to have these crazy, like, Ethiopian jazz vibraphone records. It's been getting ridiculous.

SD: You released an unusual collection of merch as part of the Mindset rollout.

KV: Are you talking about the weed?

SD: Yes, I'm talking about the weed. How did that all come together?

KV: It is spectacular marijuana, for anyone [reading this] in California who wants to try it. That shit was just complete happenstance — a very happy accident. Our manager was out in California, and I think he was meeting up with a friend of a friend who had this crackpot idea to ... get some collaborative promotion going.

Essentially, Cherry Kola Farms was the only farm that called him back. [And] there was no drawback that I could find. It's sort of a dream. If I'm gonna endorse anything — besides music equipment — marijuana's probably the thing that I use the most, if I'm being honest.

It's a unique opportunity to customize a strain, because I've gotten to a point where there are certain attributes that I look for. I don't want to be smoking something that's gonna make me lazy. There are a lot of paranoid and anxious properties that can sneak their way into certain strains. So I went through all of the strains that they had in early production, eliminating any side effects that I didn't want in this dream strain. And then I found this combination that turned out to be Headband, Pineapple OG and Banana Kush.

They started harvesting it, and, no joke, it's my favorite weed to smoke. I've been smoking it when I've been writing recently, and it's just been propelling my day all the way to 3 a.m. I just don't want to get out of the music room. It's a very motivational, inspirational, creative weed.

SD: What's something you wouldn't want to do after toking?

KV: I don't know. Pretty much just getting pulled over. I enjoy pretty much everything on marijuana. Dealing with law enforcement is the only thing I don't like after smoking.

The original print version of this article was headlined "Strange Trip"