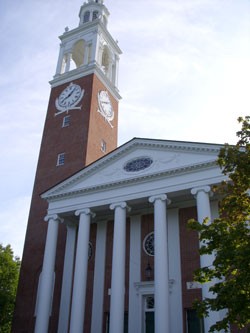 Every fall, when thousands of college students arrive in Burlington for the new school year, one of the nation’s tightest housing markets gets even tighter.

The greatest pressure comes from the Queen City’s largest academic institution, the University of Vermont, which this year is expecting nearly 9300 undergraduates — at least a third of whom will live off campus, according to estimates by city and university officials.

UVM has made a “pretty good attempt” to keep up with the housing needs of its growing student body, said Brian Pine, assistant director for housing at the city’s Community and Economic Development Office (CEDO). Still, with a vacancy rate of just 1 percent, the Burlington housing market struggles to keep pace with the influx of several thousand renting students every year.

That much was clear a decade ago, when the city and UVM first tried to get a handle on the university’s impact on the local housing market. In 1998, UVM commissioned an economic analysis that found students occupied more than 16 percent of the city’s 8100 rental units. At the time, about 2566 UVM students were living off campus — 90 percent of all students in the rental market.

The study concluded that student demand “serves to inflate rents and lower vacancies” in Burlington. Indeed, students living off-campus increased rents in Chittenden County by 10 to 15 percent, according to the study. In Burlington’s prosperous Hill Section, where more than half of all students lived, the price of rental housing was as much as 30 percent higher.

Tom Gustafson, UVM’s vice president for campus and student life, said that the low vacancy rate in Burlington can’t be attributed solely to increased student enrollment. For example, he said, vacancy rates were low in the mid-1990s, when UVM’s student population was significantly smaller than it is now. Moreover, two years after the housing analysis, UVM agreed to add 400 beds on campus. In fact, the university has added 1456 new beds since 2000 — for a total of 5544 — including the 800-bed University Heights complex.

Gustafson said juniors and seniors are responding more favorably to on-campus housing options than they have in the past. “We’re opening very full this fall,” he said, “which we take as a good sign in terms of how popular our residence halls are.”

Mark Brooks, of the real estate firm Allen & Brooks, which helped conduct the 1998 housing analysis for UVM, applauds the university’s campus housing initiatives. However, he said, continued growth in enrollment is bound to have an impact on the local rental market no matter how many residential halls are built.

“A lot of students prefer to live off-campus no matter what you do on-campus,” Brooks said. “It’s just a fact.”

Pine and Gustafson acknowledge that pledge never materialized. Instead, according to Gustafson, the two parties agreed to meet regularly to develop “creative” solutions to housing problems.

“I think we all sort of informally agreed, ‘Let’s just keep working and not worry about doing agreement after agreement,’” Gustafson recalled.

A year after the council committee’s directive, Vermont Interfaith Action, a consortium of religious congregations, sought its own agreement with UVM by pressing Gustafson to commit to an update of the 1998 housing analysis. He declined, but agreed to discuss an increase in on-campus housing, said Kathy Bonilla, the president of VIA’s board of directors.

Bonilla said it was eventually decided that the best short-term solution would be for UVM to build 50 units of affordable housing for university employees on land it owned in South Burlington.

“At the time,” Bonilla recalled, “they were saying their debt ratio was maxed out, so they couldn’t create any more student housing.”

Bonilla said her organization is satisfied with the employee housing because it’s a needed addition to the local rental market. “In a way, it was more effective, because if you create more student housing, then you have to hope and pray that students actually move into it,” she said.

UVM isn’t the only campus in town struggling to house its students. Earlier this year, Champlain College overcame opposition from its neighbors before winning approval to tear down the Eagles Club, at the corner of Maple and St. Paul streets, to build 200 student apartments.

The school’s eventual goal is to build housing for as many as 600 students. In the meantime, Champlain has agreed to lease space for 272 students at Spinner Place, a downtown Winooski complex, through 2011.

David Provost, Champlain College’s vice president of finance and administration, said leasing rental housing in Winooski isn’t consistent with the college’s goal of housing its students in Burlington. But, he said, it was a necessary response to a “desperate need for beds.”

While about 30 UVM students will live at Spinner Place this year, that’s far fewer than expected when the $23.6 million complex was proposed. At the time, the idea was that UVM would aggressively market the complex to its students.

Gustafson said that although Spinner Place is advertised on the university’s website, UVM never made a formal commitment to house students there. The apparent lack of interest in the complex by UVM students is not creating problems in the local housing market, he said. The students who live at Spinner Place take pressure off the Burlington housing market, no matter where they attend classes.

Gustafson said that, while the growth in UVM’s undergraduate population is expected to taper off, the university is moving forward with a complex on the Redstone Campus in Burlington’s Hill Section that will house up to 394 students.

Pine said the city is “optimistic” that UVM shares its concerns about the local rental market, and that the university understands the need to increase options for its students.

“When they have students who are forced to take units off campus that are perhaps cheaper, but are substandard, that concerns the students and their parents, I think, and rightly so,” Pine said. “But when the university is able to offer high-quality, comfortable, state-of-the-art living units, that gives them an edge, and I think they see it that way.”