UVM Researchers Use Video Games to Prevent Pigs From Getting Sick 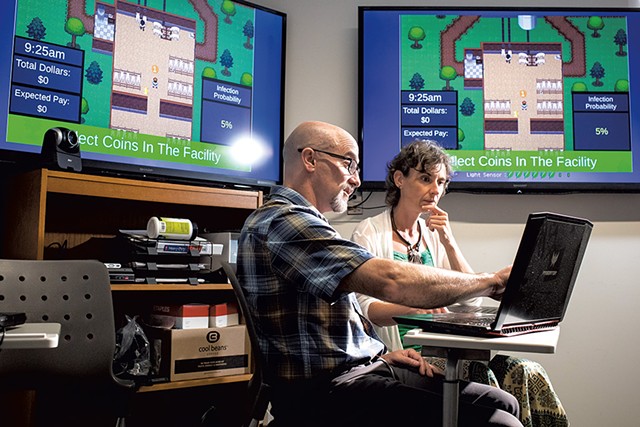 Imagine you're a pig farmer. More specifically, you're a cartoon version of a pig farmer in a computer game. Your task is simple: Using the arrow keys on your keyboard, wander around your pig barn and collect coins when they appear. It's an honest living.

When a truck arrives outside your barn, you need to greet it and collect the coins it brings. You have two options for exiting the barn: Use the fire exit, or go through a room where you shower and change clothes before exiting and reentering the barn. For every few seconds you spend showering, the number of coins you can get from the truck decreases.

You may be wondering, Why would I need to shower before leaving and returning to the barn? After worldwide disease outbreaks among pigs, more and more real-life pig farmers are taking drastic precautions to keep their animals safe. Potentially deadly porcine viruses can spread among the pigs themselves and via feed, equipment or even personnel. People who work with pigs are supposed to shower every single time they leave and reenter the barn, though the practice isn't required by law. A diligent worker might shower 13 to 17 times per day.

Researchers at the University of Vermont Social Ecological Gaming and Simulation lab created the pig game and others like it, called "compliance games," to test people's responses to risk. Among a team of researchers from across the country working to help prevent pigs from getting sick are Scott Merrill, managing director of the SEGS lab and a research assistant professor; and Gabriela Bucini, a postdoctoral research fellow. Both are part of the UVM Department of Plant and Soil Science.

In 2015, the team, led by UVM research associate professor of veterinary medicine Julie Smith, received a five-year, $7.4 million grant from the U.S. Department of Agriculture to study and create biosecurity initiatives. Team members also include economists, educators and risk-communication experts.

Merrill has taught a class called Ecological Gaming since 2013, when he started turning his favorite ecological narratives into simulations and games. In 2014, he cofounded the SEGS Lab with associate professor Asim Zia and professor Chris Koliba, both of the UVM Department of Community Development and Applied Economics. The lab's first project was a study on water quality. Merrill said they plan to apply their experimental gaming and computer modeling to issues including energy, transportation and human health.

At first glance, the pig game might seem simple, but there's a catch. The bottom right corner of the screen shows the infection probability. If it says 15 percent, your pigs have a 15 percent chance of contracting a disease if you leave and reenter the barn without showering. As a digital pig farmer, you risk losing all of the coins you've earned during that round — and more — by ignoring the warning. Real pig farmers risk infecting and losing many animals, impacting their livelihood.

Risk-averse players tend to use the shower exit, according to Merrill and Bucini. Risk-tolerant ones use the fire exit. And some players are what the UVM researchers called "opportunists," meaning their attitudes toward risk can be swayed.

"Human behavior — as it affects basically everything — is under-studied," Merrill said. Millions of dollars have been poured into studying how disease spreads among livestock. But studying those mechanisms without considering human behavior is like studying the effectiveness of soap in preventing the flu without tracking how often people actually use soap.

Merrill and Bucini research both people's attitudes toward risk and factors that affect their willingness to take risks in real life. They've tested the pig game with different groups, including UVM students and staff, an online community, and actual pig farmers at the 2018 World Pork Expo. The researchers offered cash rewards based on the number of coins participants had at the end of the game — typically between $15 and $42 — to give players an incentive to gamble.

Merrill and Bucini are also researching how message delivery affects people's risk response. In the game, the infection probability appears either as a percentage or as a qualifier, such as "low." The researchers found that people were much more likely to take a risk if the probability was displayed as a percentage.

Once data is gathered from gameplay, the duo plugs them into a computer simulation to analyze how various choices would affect the spread of disease in actual communities. Bucini has created a simulation of Duplin County, N.C. (where pigs outnumber people), that's accurate in farm size and density. She can predict how changes in message delivery would alter the course of an actual disease outbreak there.

One version of the game experimented with showing the player a video of a real farmer describing the devastating effects of losing his pig herd to disease. The researchers also examined how the time that elapsed between such warnings and players' decisions about a risk changed their attitudes toward it. The aim was to determine how often authorities should communicate the risk to farmers.

In 2013, the U.S. had its first outbreak of porcine epidemic diarrhea virus. According to the National Pork Producers Council, the virus killed approximately 7 million pigs between April 2013 and April 2014. It can spread through contact with people and equipment. Adult pigs sometimes survive PEDv, but it's usually fatal to piglets.

"This PEDv is really virulent," Merrill said. "It's fecal-oral ... so you can imagine: Just a little bit [of manure] gets on your shoe, you walk over to your neighbor's barn, they cross the same spot, and their pigs are going to get infected."

Many factors beyond risk response affect pig farmers' decisions, such as economics and social pressures. But Bucini's simulations found that, generally, PEDv can be controlled if 40 percent of people within a farming community are risk averse.

Currently, pig farmers in Asia and Europe face outbreaks of African swine fever, and millions of pigs are being slaughtered to prevent its spread, according to a recent article in the Economist. There's no vaccine or cure. Officials from Rabobank, a Dutch food and agriculture financial services company, predict that the disease could wipe out 200 million Chinese pigs by the end of the year — a 30 percent reduction of the world's largest pork production industry.

The U.S., said Merrill, has been "fairly lucky" so far, with no major losses of large animals. But the threat of African swine fever is looming.

"We were talking to someone from the National Pork Board just the other day, and they're thinking it's a 'when,' not an 'if,' it gets here," Merrill said. "We're in discussions with them on trying to develop training tools ... so they can actually train a response to this before it gets out of control."

One of the reasons disease outbreaks are such a problem in pork production is that typical pigs don't stay put. They're born on one farm and raised until they can be weaned, then transported to another farm where they stay to the age of 6 or 8 weeks. On a third farm, they're raised to market weight, or about 280 pounds at 6 months of age. Every transfer gives disease an opportunity to spread.

Pig feed is another factor in disease transmission. Feed components are often imported from China, and Bucini said there's evidence they played a role in the original spread of PEDv to the U.S.

Given all these potential transmission vectors, Merrill and Bucini said, a question has weighed on them. Is their research akin to putting a Band-Aid on the fundamental problems of factory farming, which involves raising animals in confinement to maximize production and profit?

"Most people in this lab would probably agree that factory farms are not ideal," Merrill said. "A lot of it, I would say, is market driven. People still want their bacon."

"At prices that are affordable for everybody," Bucini added. "That's the other part. It's just a whole system, and it's been created to provide enough food at reasonable prices."

Both researchers said they struggle with the question of whether to work for animal welfare within the existing system or to try to change that system. The farmers they've met seem to have genuine concern for their pigs, they noted, even if they have thousands.

"I work a lot with climate change, as well," Merrill said. "One of the best things that we could do is reduce our consumption of meat. So how do you balance that with 'We're trying to make it easier to grow meat?' ... I'm not going to be able to change everybody's mind about eating meat. But I might be able to make the lives of those animals a little better."

Imagine, once again, that you're playing the pig game. Does having all this information about pig health, diseases and factory farming affect how you choose to leave the barn? Does the shower seem more worthwhile? Would you invest in keeping your pigs safe or accept the risks of the system? Whatever your choice, you'd better make it fast. The clock is ticking.

Try out a demo version of the pig farming game at segs.w3.uvm.edu/ComplianceSeriousGame.