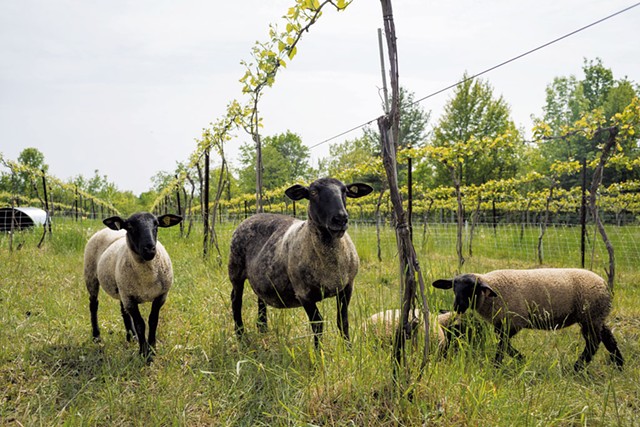 A flock of five Suffolk sheep huddled along the eastern edge of a pen in Shelburne Vineyard, too timid to approach the humans waiting for them to notice a new opening in the electric fence. Amid the rows of grapevines where the sheep presently stood, the vegetation was grazed down to the ground. But on the opposite side of the fence, the untouched grass stood higher than the sheep's withers.

With some gentle prodding from their shepherd, Mike Kirk of Greylaine Farm in Charlotte, the sheep overcame their skittishness and made a beeline into the tall grass. Once inside their new pen, the ewes scurried from one spot to another, eagerly gobbling up fresh clumps of white clover, dandelions and Kentucky bluegrass. Above the sheep's heads, the woody grapevines and their tender green shoots remained well beyond reach.

"This basically looks like we mowed last week," observed Shelburne Vineyard's Ethan Joseph, scanning the ground that the sheep had shorn clean over the last four days. "We're already talking about how to scale this up and take it vineyard-wide next year."

Ordinarily, the pairing of lamb with wine has a very different meaning to Joseph, who's been head winemaker and vineyard manager at Shelburne Vineyard since 2008. But since November, he's been working with Kirk and researchers at the University of Vermont on a small, federally funded pilot project to study the benefits of integrating sheep into the vineyard along Route 7. Their goal: to better understand what impact the practice will have on the grapes, wine, soil, sheep and environment, as well as the farm and vineyard's bottom lines and whether other vineyards in Vermont could benefit from adopting it, too.

This unusual collaboration began with an adorable photo of a lamb. In October 2018, Meredith Niles, an assistant professor in UVM's food systems program who studies sustainability, food security and agricultural policy related to climate change, was in New Zealand conducting research. On her first day there, she tweeted a photo of herself holding a lamb on a farm in Marlborough, a wine region where grazing sheep amid vineyards is commonplace.

When someone in UVM's College of Agriculture and Life Sciences retweeted Niles' photo, it went viral and eventually reached Kirk. He then forwarded it to Joseph, with whom he'd attended college at UVM. They reached out to Niles and, within days, set up a meeting. Three weeks later, they submitted a grant application to the U.S. Department of Agriculture to study the feasibility of integrating sheep into the vineyard. 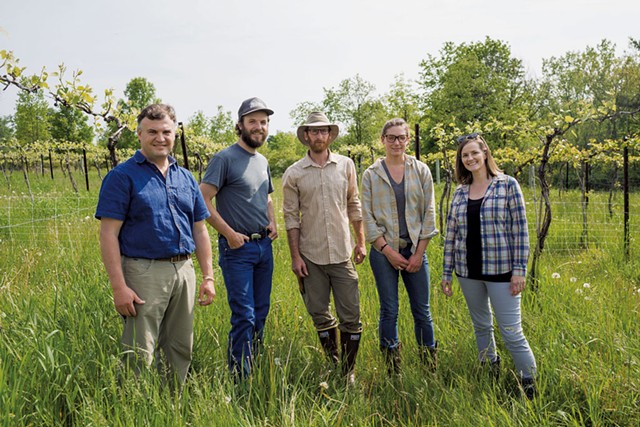 "The timing was insane," Kirk recalled, "but here we are."

Why do vineyards throughout New Zealand, the world's 15th-largest wine producer, routinely keep sheep around, while almost none in the U.S. or other wine-producing countries do? The short answer, Niles noted, is because sheep are virtually everywhere in New Zealand, a country of 4.5 million people and 27 million sheep. By contrast, there are only 500,000 sheep in the U.S.

Niles first became curious about the practice herself while working on her dissertation at the University of California, Davis beginning in 2009. While studying cap-and-trade policies in the U.S. and New Zealand, she traveled to two of the latter's renowned grape-growing regions: Marlborough and Hawke's Bay.

As Niles discovered through her research, the reasons differed depending upon whether she spoke to sheep farmers or grape growers. In Marlborough, much of the agricultural flatland near the ocean, which had once been used for sheep farming, had transitioned in the last 30 years into more profitable wine production. But sheep farming continues in the hill country, where the colder climate and rockier terrain make growing grapes impractical.

During the winter, when there's nothing in the hills for the sheep to eat, the grass still grows in the more temperate flats, Niles explained. So many sheep farmers have established relationships with winemakers to graze their animals amid the grape rows.

That relationship, Niles discovered, is symbiotic. The farmers grazing their sheep in the vineyards don't have to spend money on feed during the winter. The vineyards that allow grazing use fewer herbicides and mow less frequently, saving them money on fuel, labor, fertilizer and other inputs.

Moreover, Niles found that those benefits were reaped regardless of the vineyards' size, which in her study ranged from small, boutique vineyards of 10 hectares to huge commercial vineyards of thousands of hectares.

Joseph at Shelburne Vineyard had heard about the practice of keeping sheep years earlier and had even tried it once himself. About eight years ago, he had a small test site of grapes at Shelburne Farms, where he tried bringing in sheep.

"It failed miserably because our timing was way off," Joseph recalled. Because the vine trellises were closer to the ground, and the sheep were brought in later in the growing season, the animals ate the tips off the vines, preventing them from bearing fruit.

That won't be a problem this time, Joseph emphasized. Kirk will move his sheep back to their 30-acre pasture in Charlotte in the next few weeks, before the vine shoots grow long enough for the sheep to reach them. Then, depending upon his breeding schedule in the fall, Kirk plans to bring the sheep back to do some cleanup after the grapes have been harvested.

What are the potential benefits to Shelburne Vineyard? He said he expects the sheep will reduce the frequency of mowing and improve the soil health by aerating and fertilizing it.

From the shepherd's standpoint, Kirk weighed his animals before bringing them to the vineyard. Once they're returned to the farm in Charlotte, he'll get weights again to see how they fared on the Shelburne pasture compared to his other animals.

Kirk admitted that this hasn't been an easy process. "It's been logistically challenging and time-consuming and nerve-racking," he said. "We spend a lot of time and money on these animals, which is also why we started small."

When Kirk and his girlfriend, Marion Bourgault-Ramsay, move their sheep, they have to shepherd them into the barn, corral and separate them — they brought breeding ewes only, not sheep being raised and finished for slaughter — then load them into a truck and drive them to the vineyard.

The night before the project began in early May, a friend casually asked Kirk what would happen if the sheep got loose and wandered onto Route 7. Before then, the thought hadn't crossed his mind.

"Why'd you even have to mention that?" Kirk remembered saying, as semis roared past the vineyard.

Despite a few initial hiccups, however, he and Joseph see the project as mutually beneficial, especially because it builds a relationship between two local food producers and attracts consumers' interest in both operations.

This is a good example of how two different agricultural businesses can come together. Ethan Joseph tweet this

"Wine often gets overlooked as an agricultural product, mainly because people are used to larger-scale [production], like grocery store wine," said Joseph. He has about 25 acres under vine at four sites, producing 5,000 to 6,000 cases of wine annually. "This is a good example of how two different agricultural businesses can come together."

Kirk agrees. Greylaine Farm, which raises sheep and pigs for meat, gets very little public exposure. As he put it, "We're on a dead-end dirt road in Charlotte. No one sees our sheep unless they're flying over our land."

Indeed, Shelburne Vineyard has already begun marketing itself with the sheep, with photos of them on its home page. Visitors to the tasting room can read informational sheets about the sheep program, and are invited to post their own sheep photos on the vineyard's social media sites. In the future, the vineyard may also sell Greylaine Farm meats in its tasting room, along with its other Vermont-made products.

"What I really like about this project is, we're facing a crisis right now in dairy and other agricultural sectors," said Juan Alvez, a UVM Extension research associate and pasture-based family farmer from Uruguay who works with Niles on the project. "This is a way to combine two enterprises and create a win-win scenario."

Niles sees the potential for expanding the use of sheep at other Vermont vineyards. Though the state's wine industry is still small, it's grown in recent years. As of 2017, the industry directly employed about 2,500 people at three dozen vineyards, according to data from WineAmerica, the National Association of American Wineries.

But apart from Shelburne Vineyard, Niles knows of no others in Vermont that currently use sheep; apart from a few in New York's Finger Lakes region and others on the West Coast, virtually none is doing it elsewhere in the U.S., either.

Longer term, Niles sees opportunities for integrating livestock into other Vermont farming operations. While there are some public health issues related to raising livestock around food crops, she thinks the practice can be done almost anywhere that grass grows between the crops, such as on Christmas tree farms, and where crops get processed before consumption, such as cider orchards and hops operations.

But, Niles said, they'll need to show "proof of concept" at Shelburne Vineyard before trying to convince others to herd it through the grapevine.

Greylaine Farm's ewes will be at Shelburne Vineyard for a few more weeks, weather depending.