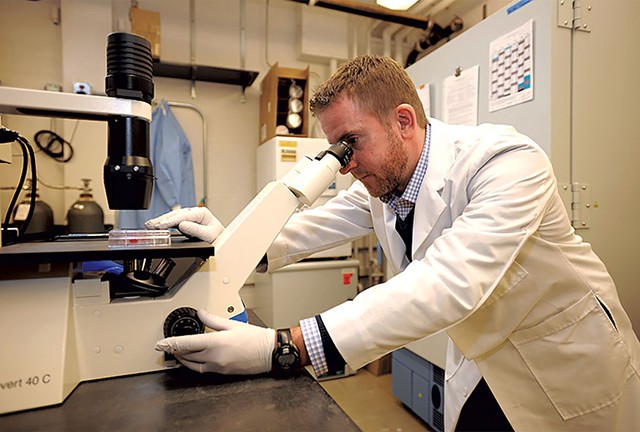 Sean Diehl likens the development of a new vaccine to the construction of a house. Before workers can turn a shovelful of dirt or hammer a nail, an architect must create a blueprint that shows how the building's thousands of components fit together and in what order.

Similarly, vaccine researchers trying to stop the spread of a deadly virus must start by mapping its messenger RNA. Decoding that genetic blueprint allows them to construct a safe and reliable vaccine that, they hope, will provide immunity for decades.

This time, researchers are racing to devise a vaccine that will stop a pandemic that's already upon us, using a never-before-tried method. It's akin to erecting a storm shelter using a new construction technique just as a Category 5 hurricane makes landfall.

There is no current vaccine that's ever been developed this way. Sean Diehl tweet this

Diehl is an assistant professor in the Department of Microbiology and Molecular Genetics at the University of Vermont's Larner College of Medicine. Since 2008, he's collaborated with the college's Vaccine Testing Center on projects involving infectious diseases, autoimmune disorders and vaccine development. In the past few years, Diehl's laboratory has focused on developing new protections against rotavirus, which is one of the most common and deadly causes of childhood diarrhea, and two mosquito-borne viruses — dengue and Zika — which infect tens of millions of people worldwide each year.

The 44-year-old Shelburne resident agreed to an interview with Seven Days months before the novel coronavirus made headlines. Since then, Diehl has joined the global effort to develop a vaccine against COVID-19.

On that front, researchers are already working at breakneck speed. They began in late December, when health authorities in Wuhan, China, first reported the outbreak of a viral pneumonia of unknown origin. On January 12, Chinese health authorities and the World Health Organization announced that they had mapped the entire sequence of the new coronavirus genome and shared it with researchers around the world.

On March 16, the National Institutes of Health announced the launch of a Phase 1 clinical trial to evaluate an experimental COVID-19 vaccine. In that study, being conducted at the Kaiser Permanente Washington Health Research Institute in Seattle, 45 healthy volunteers, ages 18 to 55, were injected with different doses of an experimental vaccine to evaluate its safety and efficacy in inducing immune responses.

Diehl is not involved in the Washington study. But, using the expertise he gained from researching dengue and Zika vaccines, he explained how a COVID-19 vaccine will be developed, how long it could last and how we can create more effective versions in the future.

"This is a brand-new approach," he said of the experimental coronavirus shot. "There is no current vaccine that's ever been developed this way."

How long before the public can be immunized? That's difficult to say. Diehl wouldn't offer a prediction beyond saying that "there are some aggressive timelines being talked about."

Ordinarily, vaccines involve years of research before human trials begin. But advanced genetic technologies and reductions in bureaucratic red tape could significantly shorten that timeline for COVID-19, with some estimates saying a vaccine could be available as early as this fall.

Several methods are used to create a vaccine, Diehl said. Under normal circumstances, the most common is to start with an attenuated, or weakened, version of a virus. Scientists inject this weaker version into laboratory animals, typically mice and nonhuman primates, hoping to trigger an immune response that doesn't make the animal sick. Only after long and rigorous study do vaccine developers request approval from the U.S. Food & Drug Administration to move on to human trials.

Consider the lengthy path that brought researchers to a vaccine for just one of four serotypes, or strains, of dengue (known as "Dengue 1, 2," etc.). Versions of the deadly virus are found in more than 100 countries around the world, posing a risk to about 40 percent of the world's population, or 3 billion people. According to the U.S. Centers for Disease Control and Prevention, as many as 400 million people are infected with dengue each year, of whom 100 million get sick and 22,000 die.

Though dengue's mortality rate is about 0.1 percent, comparable to seasonal flu, Diehl pointed out that its symptoms are much worse. "Dengue" may derive from the Spanish word for fastidious or careful, which describes the gait of a patient suffering from the disease.

The disease causes a very high fever that progresses into terrible joint, muscle and bone aches — hence its nickname, "breakbone fever." Patients feel that their eyes are about to pop out of their heads.

Dengue is a particularly complicated disease to combat because of its four serotypes; an immunity to one offers no protection against the other three. If a person contracts Dengue 1 in, say, the Dominican Republic, they may recover without even knowing they were infected. However, if that person later travels to Puerto Rico and contracts Dengue 2, they have a greater chance of getting sick from the second exposure.

"For dengue," Diehl said, "it's taken, so far, 20 years and several billion dollars to get to the point of [having] the one vaccine that's on the market right now, for a very limited use."

What does this mean to researchers racing for a coronavirus vaccine? Speaking in "really broad brushstrokes," Diehl said, the way genetic material is encoded in the coronavirus is "very similar" to the coding of dengue. Both viruses have one long, continuous string of nucleic acid, or mRNA, that is "read" as a series of letters representing its chemical components: adenine (A), guanine (G), cytosine (C) and urasil (U).*

Working with a much longer string of information naturally presents more challenges. But, Diehl said, COVID-19 researchers don't need a full understanding of how all 29,289 letters of the genome function. The novel approach they're using to develop a vaccine is focused on the 3,000 to 5,000 letters that they believe may induce an early protective immune response. If they can pinpoint those letters, they will, in effect, buy themselves more time.

By now, most people who are following news of the unfolding pandemic have seen images of the COVID-19 virus, which resembles a fuzzy tennis ball riddled with darts or crowns. Those darts, which are called spike proteins, enable the virus to attach itself to a target cell, pass along its genetic material and reproduce.

The good news: Vaccine developers now have machines that can rapidly synthesize and mass produce the crucial 3,000- to 5,000-letter sequences that can be used to induce a pre-fusion immune response.

The bad news: That immune response won't last for long, because the mRNA used to produce it is an unstable molecule that degrades quickly in the body. "A good vaccine will last decades. This is probably single years," Diehl said.

That may be enough, though. Here's where Diehl joins the global effort: He has submitted a protocol seeking permission to collect and study blood samples from patients who have recovered from COVID-19. Once researchers better understand how all of the nucleotides work together, he said, they can move on to developing vaccine "versions 2.0, 3.0 and beyond" that will induce "immune memory."

It's no surprise that Diehl uses construction metaphors to describe the microscopic workings of cells and viruses; his father, who's now retired, worked for years in construction. To his mother, a nurse, Diehl attributes his desire to work in a public health field and help others.

A native of Rome, N.Y., Diehl earned a bachelor's degree in chemistry at the State University of New York Geneseo. There, he developed an interest in immunology, and a professor suggested he pursue a doctoral degree. The first member of his family to attend a four-year college, Diehl hadn't known until then that students could get funding to pursue graduate degrees.

Earning his PhD at UVM, Diehl met his now-wife, Sandra. When he completed the degree, they moved to the Netherlands, where Sandra was born and raised.

After spending 2003 to 2008 at the University of Amsterdam, Diehl returned to Vermont and joined the faculty at UVM, where he's been ever since. Sandra works as a pediatric nurse at the UVM Medical Center. The couple has two daughters, Jill, 11, and Vera, 9.

Diehl admitted that it's frustrating to see vaccines demonized by the public when he knows how much "blood, sweat and tears" go into making them. He sees them as a "miracle product" that saves lives. "And then some people just choose not to believe in them."

"The fact that we'll never figure it all out," he said. Unlike the study of many processes in the human body, such as the cardiopulmonary system, immunology is constantly evolving and discovering new cell types. And those discoveries almost always have real-world health applications, whether it's combating an autoimmune disorder or working to end a global pandemic. Given its complexity, COVID-19 could keep researchers busy for years to come.

"At the root of it," Diehl said, "I always know that there's so much still to be learned."

Correction March 26, 2020: This article originally misidentified one of the components in the coronavirus mRNA, and the number of letters in the string.