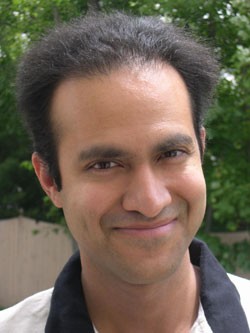 Dr. Saleem Ali is not a fan of American imperialism. But unlike some left-leaning thinkers, he resists the term “resource war” to describe the U.S. government’s appetite for the natural bounty of other nations.

Ali, a professor at the University of Vermont’s Rubenstein School of Environment and Natural Resources, argues that global resource conflicts happen for a variety of reasons, not just as a consequence of America’s thirst for oil.

Ali will explore the relationship between national security and environmental conflict at a forum in Waitsfield this week. He’s written numerous books and newspaper articles on such topics as education, conservation and mining. SEED, a New York-based science magazine, recently honored him for his attempt to create a “peace park” on the border of India and Pakistan.

Last week, soon after returning from a trip to Brazil, Ali spoke with Seven Days by phone from his home in Essex Junction.

SALEEM ALI: Clearly, we’re living in a world with an increasing strain on resources. We hear about “oil wars” and “water wars” and “black diamonds.” There’s been a kind of hysteria of concern about resource depletion and how that’s going to affect conflicts in various ways. So what I’m going to talk about is how resource scarcity affects conflict . . .

My own approach on this is perhaps a little bit more nuanced than some of the popular writing of late. You may have come across [Hampshire College professor] Michael Klare, who wrote the book Resource Wars. You can think of me as a bit of a nemesis to that kind of narrative.

SA: As an environmental planner, of course I’m concerned about resource scarcity, but I find it a bit discomforting that the narrative on resources has now been politicized, so basically everything is about resources . . .

I try to make [my research] a little more empirical. For example, the question about the “resource curse” and oil leading to conflict: I can approach it from an academic perspective of saying, “Well, countries that have more resources, are they more likely to engage in conflict or not?” A lot of the regression research that has been done by political scientists like [UCLA Professor] Michael Ross would suggest that it is.

But what I argue is that the methodology is partly flawed . . . We should be concerned about depletion, but we shouldn’t get carried away with linking everything to a dominant variable [such as] our dependence on oil or our consumer lifestyle . . . We have to focus on institutions. We have to focus on mechanisms by which resources can be properly used, rather than throw the baby out with the bathwater, which has become very fashionable of late.

SA: Yes. Some of the rhetoric you hear from environmentalists is, “If a country finds oil or diamonds, beware! Beware! It’s going to be a complete disaster. You’re going to be consumed by greed.”

I find that to be very problematic. I think one of the main goals of environmentalism should be, from an environmental-justice perspective, to try and grapple with global inequality.

I also find this “local is better” rhetoric to be a bit problematic. Because if you’re really an environmentalist, you need to think at a planetary level for all humanity . . . I consider myself an environmentalist; I’m just much more of a globalist in terms of my approach to resources. My primary interest is really in trying to deal with poverty alleviation.

SA: The issue of the U.S. presence in any particular country needs to be separated from the issue of resources. Klare and colleagues conflate the two . . . I’m one who’s been a great critic of U.S. military efforts, but you have to look at each case specifically.

The U.S. military is not present in Nigeria; Nigeria’s problems in terms of oil conflicts are largely due to a failed state. The country’s leaders assumed that the wealth from one part of the country could be used to develop the whole country, when there was absolutely no national identity to begin with.

SA: You have to think of it at two levels: One is in terms of a fixed resource where you don’t have any governance systems and you’re going to have a free-for-all — a “tragedy of the commons” situation, like fishing, where people are just going to go in and get whatever they can grab. In that case, resource scarcity can lead to conflict.

The other side of the story, though, is that if you have good information and resource scarcity is approached through institutions which understand that cooperating is going to improve our chances of getting that resource, then you get cooperation.

SA: That’s a continuation of the same kind of thinking: If you have an area of land or body of water which is ecologically sensitive and valuable for both sides, it’s more likely that you’ll get cooperation. And the better part of it is, even if there is conflict, you can use it as a stimulus for cooperation.

An example is the conflict between Ecuador and Peru. From the 19th century up to the 1990s, there was a territorial dispute about the Cordillera del Condor region. Then finally there was a realization that this was a highly valuable part of the Amazon rain forest that was of value to both sides. The environment actually helped to catalyze a peace treaty . . . and the Cordillera del Condor essentially became a peace park.

SA: Yeah, I think that Vermont has a very distinguished record of using the environment to bring communities together . . . You can get conflicts over certain values, with wind farming and so on. [But] in terms of peace parks themselves, Lake Champlain is a good example of how the U.S. and Canada have cooperated over a resource which historically has been a source of conflict.

SA: Clearly, we need to find new sources of energy, and if he’s talking about finding energy resources as a priority, then I’m all for it, and I think that’s great. But if he’s confining that to meaning we should become more insular, it’s not environmentally realistic, because you want to find energy where it’s most efficient to do so, rather than drill in the middle of nowhere.

SA: No. My focus is, “Where will [oil extraction] lead to development and livelihoods?” There it will lead to no livelihoods, really, so I’m not in favor of it. I am in favor of drilling in places where it can lead to a positive trajectory, in places like West Africa, but with proper governance regimes, not with the old ‘60s mindset of, “Just go get the resources and let the dictators share the spoils.”

SA: I’m actually quite against nuclear, as someone who’s studied uranium mining in Canada, Australia and Navaho communities. It’s tremendously negative, and then we still don’t know what to do with the waste! It’s a total conundrum for engineers...