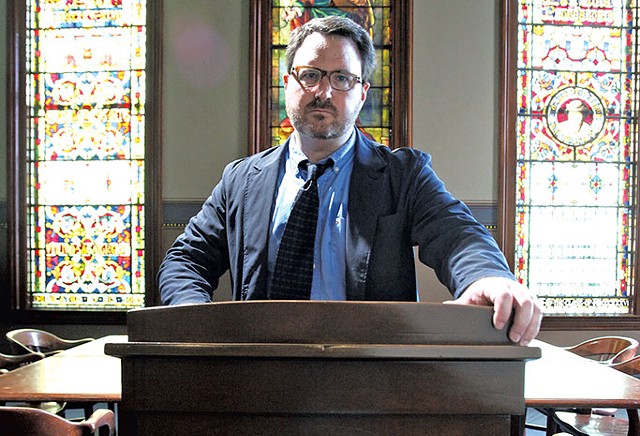 A University of Vermont professor has waded into the national debate about academic free speech and political correctness with a broadside against the UVM team charged with investigating bias, discrimination and harassment on campus.

The Bias Response Team defines its mission in a broad, vague manner that could have a chilling impact on free speech and stifle debate of difficult issues, according to Aaron Kindsvatter, an associate professor in the UVM College of Education and Social Services.

"The language of the University of Vermont Bias Response Team really opens the doors for censorship of anyone of any ideological perspective who says something in class that could potentially offend somebody else," Kindsvatter told Seven Days.

He made the same argument in an August 30 email to members of the UVM community, then forwarded his missive to two national groups, the Foundation for Individual Rights in Education and Heterodox Academy. Online commenters quickly characterized the UVM BRT's powers as "Orwellian."

UVM's BRT was launched in early 2014 to augment existing protocols to process complaints about racism, sexism and homophobia on campus. Reports can be made online — anonymously — in an effort to hold people accountable for speech that hurts and intimidates others.

It meets about once a month to review incidents after a staff member has sorted through reports to determine which ones rise to the level of "team involvement" and which should be referred to other university entities, according to UVM director of communications Enrique Corredera.

"The team approach and philosophy is that of educating and promoting further dialogue, and making appropriate referrals to other departments," Corredera wrote in an email. "The team does not act as a sanctioning panel."

Nor does it weigh in on classroom content, according to Annie Stevens, UVM's vice provost for student affairs.

But at other universities around the country, bias response teams have entered the realm of lecture halls, triggering an intense debate about free speech on campus. Critics say they're part of a suffocating trend — along with the labeling of classrooms as "safe spaces," the use of "trigger warnings" before discussion of potentially offensive material, and the characterization of real or perceived slights as "micro-aggressions."

Concerned with these trends, the University of Chicago issued a "statement on principles of free expression" four years ago that guarantees all members of the university community "the broadest possible latitude to speak, write, listen, challenge, and learn." It asserts that the university's role is not to shield individuals from ideas and opinions they find unwelcome, disagreeable or even deeply offensive.

Chicago followed up this summer with a welcome letter to freshmen saying that the school does not support trigger warnings or intellectual safe spaces where "individuals can retreat from ideas and perspectives at odds with their own." The much-shared letter has become something of an internet sensation.

Earlier this month, the president of the University of Northern Colorado announced that she would dismantle the bias response team there because the group told an adjunct professor to stick to safe topics. His lecture had offended a transgender student.

No specific incident is driving Kindsvatter's campaign, he said during a conversation in his sparsely furnished office at Mann Hall last week, where he plans his lectures for graduate education students training to be school counselors and psychotherapists.

It doesn't appear to be politically motivated, either. Kindsvatter intends to vote for Hillary Clinton in the presidential elections and says he supports gay rights — he's looking forward to his sister's upcoming marriage to a woman. But he doesn't necessarily align with the Democrats anymore, or liberals in general.

To that end, Kindsvatter plans to ask the union that represents the UVM faculty to adopt the same academic freedom statement that is in place at the University of Chicago. He also wants the UVM administration to adopt new language and procedures for the BRT. The definition of bias is too broad, and the fact that people can report alleged bias anonymously is just plain wrong, Kindsvatter said.

Calling it "crazy making," he said such an approach "certainly does not create an atmosphere that is healthy and safe for interrogation of thorny ideas."

During a Monday night lecture, Kindsvatter practiced what he's preaching by asking 25 graduate students what they thought of his email. Animated and athletic, he stood before them in a short-sleeved sports shirt and khaki-colored pants, his hipster beard flecked with gray.

Some suggested that UVM and other schools created bias reponse teams partly to ward off litigation. Another said she got fired from a job after complaining about a sexist boss and suggested that a bias response team might have helped in that situation. Others agreed with Kindsvatter's contention that the UVM BRT's powers are too broad but worried that narrowing the scope would leave students vulnerable. The goal should be to foster conversations that are "productive and not blatantly hurtful," one student said.

In a booming voice, Kindsvatter responded, "Really good point," and then proceeded to disagree.

Free and open discussion is the best way to attack bad ideas, Kindsvatter said. UVM's system, he continued, "is begging to be misused by people who have an ax to grind."

During a break in the two-hour class, student Tyler Brassard said he thought Kindsvatter's letter was well written and important. What's really at stake is finding a balance between "people's right to speak and the individual's right to feel protected," he said.

Peter Guarco, another student in the class, also agreed with the letter. A college campus should be a place where students can "make reasoned arguments and not have to muzzle them for political considerations." The definition of bias at UVM seems to be "very broad and very wide," he said.

Under the current procedure at UVM, reports can be made against someone who exhibits bias, which UVM policy defines as a "personal inclination or temperament based on unreasoned judgment or belief."

According to the policy, the bias may be reflected in behavior that is "threatening, harassing, intimidating, discriminatory, hostile, unwelcoming, exclusionary, demeaning or derogatory" and is based on a person's real or perceived identity or group affiliation including race/ethnicity, age, disability status, gender, gender identity/expression, national origin, sexual orientation, veteran status or religion.

Stevens sees no need for a change in the current wording that guides the team, nor does she see the need to adopt a statement in support of academic free speech.

That's already a given at UVM, Stevens said: "I would say that the university certainly upholds freedom of speech rights like any higher education system would." She added, "And at the same time we are also, I think, really good about always wanting ... to feel like this is a very respectful and inclusive community."

Since it was launched, the BRT has investigated 10 incidents, according to information that UVM provided to Seven Days. The descriptions of the incidents do not include names, and they refer to students, faculty or staff as "UVM affiliates."

Three incidents involved the N-word: written on someone's door, spray-painted on a wall and used in an email. In the first two cases, the BRT did not discover the perpetrator. In the third, which took place on November 2, 2015, the Student Government Association required the student group responsible to attend a "social justice training," according to UVM. The individual who did the deed was suspended from the group for a semester, wrote an apology letter and met with staff at UVM's ALANA Student Center. The report did not identify the group involved.

In another incident, an unknown person spray-painted a swastika on a sidewalk. Also reported: a complaint that UVM shuttle-bus drivers were enforcing open container rules more strictly for students of color. In that case, the bus contractor had to attend a training that addressed racial profiling.

In October of 2014, a student complained that a dining hall employee had brought a sombrero and fake mustache to wear on Taco Tuesday. The student saw the outfit not as festive but as "representing an entire culture in one way," Stevens said, as well as cultural appropriation of Mexican heritage. The offender had to attend a diversity and inclusion training, in which they discussed "why the staff member thought it would be funny and why the student didn't and resolved it in a really positive way," Stevens said.

More recently in April, students used the bias reporting system to argue that all "gendered" spaces on campus should be reorganized to be gender-neutral — a suggestion UVM is studying.

In the meantime, will Kindsvatter's complaint get any traction? Debate has been slow to start, perhaps because his email did not go out to the entire student body — only to those in his graduate degree counseling program, alumni and some faculty.

Clare Ginger is an associate professor of environmental policy at UVM. She's read Kindsvatter's letter and thinks it could promote helpful conversation on campus. Ginger hasn't made up her mind about whether the faculty should back the University of Chicago's freedom statement.

"I would have to say, I'm agnostic on it at this point," Ginger said.

She can see why the BRT allows anonymous reporting. "I understand the role of anonymity, because people won't report things sometimes if they have to put their name on it," she said. "I think that it's a sensitive area that bears some discussion."

As for Kindsvatter, he's thankful to have tenure. Without it, criticizing his employer so openly might cost him his job, he acknowledged. He remembers toddling around Kent State University with his professor father and later earning his bachelor's, master's and PhD there, noting that the Ohio institution of higher learning has a much stronger commitment to the First Amendment than UVM does. "It's like night and day," Kindsvatter said.

Here in Vermont, he clearly enjoys playing the role of provocateur, as evidenced by the final paragraph of his open letter to university students. It reads:

"If you find anything in this letter suggestive of unreasoned thinking or judgment, and if it offends you or otherwise upsets you, you can report the author to the bias response authorities at the University of Vermont. Kind regards, Aaron Kindsvatter, Ph.D."

He even provided the link.