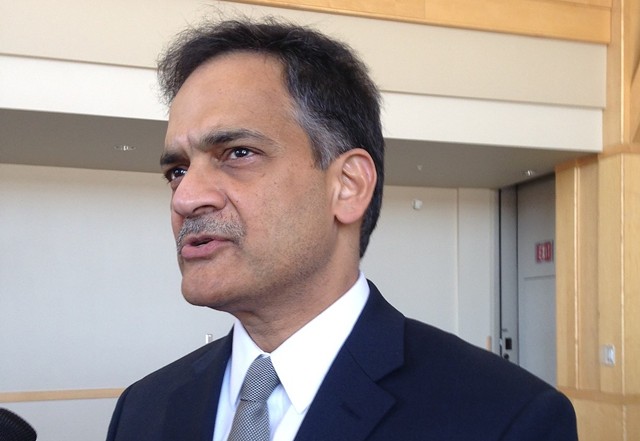 University of Vermont president Suresh Garimella took aim at the media for its coverage of a federal probe into allegations of antisemitism on campus, asserting in a statement on Thursday that the complaint that prompted the investigation, and its subsequent portrayal, "painted our community in a patently false light."

The complaint, filed in October 2021 by the advocacy organizations Jewish on Campus and the Louis D. Brandeis Center, alleged that the university failed to adequately address reports of harassment directed at Jewish students, including the vandalism of the UVM Hillel building and social media posts by a teaching assistant threatening to lower the grades of Zionist Jews, a faction of Judaism that identifies Israel as the homeland of the Jewish people.


"The uninformed narrative published this week has been harmful to UVM," Garimella charged. "Equally importantly, it is harmful to our Jewish students, faculty, staff, and alumni."

Seven Days wrote about the complaint on Tuesday and sought and received a statement from UVM, which said it planned to cooperate with the  investigation by the U.S. Department of Education's Office for Civil Rights.

In his rebuttal on Thursday, Garimella insisted that the university responded appropriately to the incidents in the complaint. With regard to the teaching assistant's social media activity, "the university took prompt action to ensure that the objectionable statements did not adversely impact students in the classroom and further, to perform a thorough review to ensure all grades were awarded on a non-discriminatory basis," he wrote.

Garimella said the complaint was made on September 6, 2021, and "the university’s response to the report was completed by September 30, 2021."

A UVM spokesperson declined to say which specific actions the administration took or whether the teaching assistant is still employed by the university.

The alleged vandalism of the Hillel building, according to Garimella, was, in fact, the action of a group of concerned students, who "threw the small rocks at a window of the Hillel building ... to get the attention of a friend who was convalescing in the building while recovering from an illness," he wrote. The university found no evidence that the students had been motivated by antisemitic bias, Garimella said.

That incident was reported on September 24, 2021; "the university’s review and response to the police and administrative reports was completed by September 28, 2021," Garimella wrote.

Feds Launch Investigation Into Alleged Antisemitism at UVM
By Chelsea Edgar
Education
The complaint also alleged that two student groups, UVM Empowering Survivors and the UVM Revolutionary Socialist Union book club, discriminated against Jews by stating on social media that Zionism would not be tolerated within their membership. After receiving complaints from students, Garimella said, the university determined that the two groups were not officially recognized by the university and, therefore, were not subject to UVM policies.

"To ensure an inclusive environment within recognized UVM student organizations, student leaders were reminded of university policies prohibiting discrimination on the basis of religion, national origin, or any other protected category," Garimella said in his statement.

On Friday, Jewish leaders and advocacy groups blasted Garimella's defense of the university's conduct. Twenty organizations, including Hillel International and the American Jewish Committee, one of the country's oldest Jewish advocacy organizations, issued an open letter accusing Garimella of diminishing the students' concerns and suggesting "that aggrieved Jewish students should not have sought recourse through a regular legal process that exists for the very purpose of investigating civil rights complaints, including those pertaining to antisemitism."

In its own statement, the American Jewish Committee said that it was "deeply disappointed that the university chose to speak on behalf of Jewish students, rather than stage a more robust and much-needed conversation with them about the antisemitism being reported on campus."