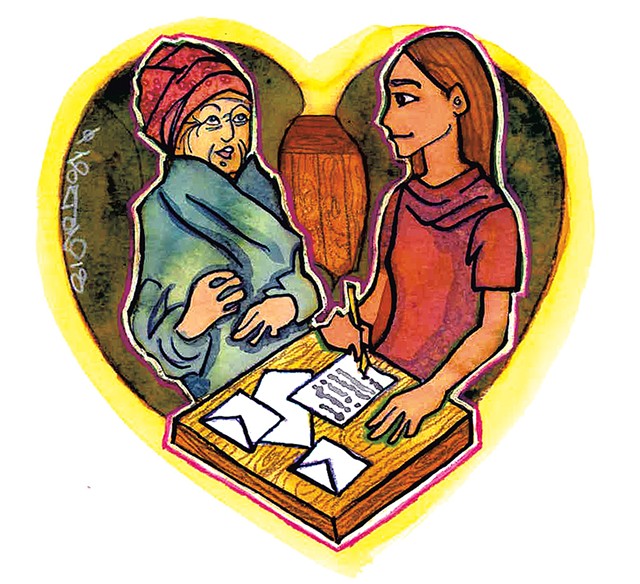 Roberta MacDonald guffawed when she remembered a riddle her friend once asked her: What's the No. 1 cause of death? No, it's not heart disease or cancer, as one might typically guess. "It's birth," said MacDonald. "That was Paula's line — I love that."

Paula Fives-Taylor, professor emeritus of microbiology at the University of Vermont, died in January 2015. In the last few months of her life, MacDonald moved into the octogenarian's house to be her primary caregiver while still working full time at Cabot Creamery Cooperative.

The two women had met years earlier at a hospice volunteer training course led by Fives-Taylor. Through her own experience as her former teacher's caregiver, MacDonald discovered gaps in end-of-life services. She decided she wanted to educate others on how to support individuals in their final months or days — as an end-of-life doula.

"Doula" comes from the Greek word doul, which means "female servant or slave." In modern usage, the word refers to a nonfamily member who provides nonmedical emotional, spiritual and physical support during major life transitions, particularly birth or death.

For most of history, dying people were cared for in the home by relatives or community members, said Michelle Acciavatti, an end-of-life specialist based in Montpelier. Today, end-of-life doulas, also known as death doulas or death midwives, address an increasingly pressing need in mainstream American culture: Medical advancements continue to extend human life, while adult children commonly live far from their parents. Doulas can provide the support families may not be able to offer when an elderly or ill parent is most in need.

End-of-life doulas can also complement the care provided by family members, friends, and palliative or hospice professionals within hospitals, senior care facilities and homes. They help de-medicalize death, Acciavatti said, and remind families and patients that it's a natural occurrence. While this isn't a new occupation, "it hasn't ever had a label, name or movement," she added.

In 2016, MacDonald approached UVM Continuing and Distance Education proposing an end-of-life doula program. One of the people she met was Matt Sayre, a senior program developer there and at UVM's Larner College of Medicine. He went on to conduct market research and convene a focus group.

Sayre determined that, while end-of-life doula might be an emerging career choice, few specific jobs would be available to graduates, making the program a gamble for prospective students. Another financial deterrent: Insurance policies, Medicare and Medicaid do not cover the cost of hiring an end-of-life doula.

But the project got off the ground when MacDonald's employer, Cabot Creamery, chose it as one of its centennial legacy projects and underwrote the tuition fee for the first 100 students.

Several organizations, businesses and medical centers train death doulas, including the New Jersey-based nonprofit International End of Life Doula Association. But there's still no consensus on which skills should be covered, and it's not yet a regulated profession, said Acciavatti. She took several such trainings.

Last fall, UVM launched its eight-week online end-of-life doula program. Sayre believes it was "quite possibly" the first U.S. university to offer such a training.

Lead instructor Francesca Arnoldy spent a year researching and developing the curriculum. The birth doula and UVM alumna said she contemplated her work in supporting births and then translated it to end-of-life care.

Though birth and death clearly have different outcomes, in each instance, doulas help clients come to terms with a new reality and way of living, Arnoldy said. She uses the word "clients" instead of "patients" to reflect a doula's role as a nonmedical care provider.

In the broadest sense, an end-of-life doula is present for the dying person. "We're there to hold their hand and companion them as they make empowered decisions to walk their best path and have their dying experience unfold as it's meant to," said Arnoldy.

At the most basic level, end-of-life doulas provide companionship. They also make sure things are in order. They can encourage their clients to complete advance directives, be scribes and write notes, cards and letters to people the clients are leaving behind, help craft obituaries, plan vigils, and lead relaxation and breathing exercises. They also work through their clients' fears and anxieties. Some doulas, like Acciavatti, are also hired to work with families to deal with anticipatory grief and the potential guilt caused by physical absence from the dying person.

The concept of dying well — with dignity and self-determination — can be traced in part to baby boomers, said Acciavatti. In the generation that came of age during the Vietnam War, she suggested, "there was no question that the right to do what's best for yourself is a right worth fighting for."

The National Hospice and Palliative Care Organization has created an end-of-life doula council that convened for the first time last week in Washington, D.C. — a sign that death doulas are being recognized and supported.

Sayre said he was confident UVM's course would have at least enough applicants to make up two cohorts of 25. The program has surpassed that number: It's now into its third session, and about 200 people will have completed the program by June. More sessions are planned for the summer and fall.

Arnoldy also enlisted subject matter experts to give presentations on particular topics. One is Acciavatti, who started a business in 2016 called Ending Well. Another is Robert Gramling, the chief of palliative medicine at UVM's medical school. He's familiar with the concept of a doula, having worked with birth doulas in his previous career as a family physician.

"I found the doula role to be really therapeutic for women and their families during the birthing process," he said.

According to Arnoldy, the participants, most of whom are women, are of various ages and come from all over the U.S. and Canada. Many are already working in different capacities with people at the end of life. However, not everyone in the program intends to pursue a professional career as a doula, Arnoldy said. Some enrolled hoping to enhance their ability to offer emotional support in their established professions, including nurses, home health aides, chaplains, and music and physical therapists.

Not all the participants are health care practitioners. Jacqueline Weinstock, an associate professor in UVM's Human Development & Family Studies Program, took the class to learn more about the positive ways of thinking about dying. When she returns from her sabbatical leave this fall, Weinstock said, she plans to incorporate what she learned into her class on the positive psychology of aging.

Eva Pellegrino does aspire to be an end-of-life doula. The Colchester resident, a licensed nursing assistant at the UVM Medical Center, was in the program's first cohort. For the last two months, she's been trying to set up her own business and is reaching out to nursing homes in Chittenden County, hoping to partner with them and come in to serve clients.

"I don't think anybody wants to die alone," Pellegrino said.

Another doula trainee is Debra Dunn-Ryan from Madison, Wisc. The recently retired nurse learned about UVM's program from a former hospice colleague. Dunn-Ryan admitted she wasn't sure how much she'd get out of the course. But she was impressed by the depth and breadth of the topics covered.

"It humbled me to the fact that, you know, you have a lot to learn," said Dunn-Ryan.

Reflecting on her 46-year nursing and hospice experience, she observed that dying can be a terrifying time. "End-of-life doulas can open a whole new door to people [who] have things that need expressing," she said, "or just need the feeling of having someone close by."

Unlike Pellegrino, Dunn-Ryan isn't planning to work as a paid doula. Instead, she plans to be a hospice volunteer. "This is quite a new venture, and I think people are a little leery of it," she said. Hiring an end-of-life doula "almost seems like a luxury" for people who don't have a lot of insurance coverage.

In an occupation that primarily supplies emotional labor, the issue of justifying costs always comes up, said Acciavatti, who offers her services on a sliding scale. But she asserts that doulas are a valuable addition to the end-of-life process. "Someone has gone through training ... paid money to people to learn how to be there and how to be of service to you," she said.

Gramling concurs with Acciavatti's sentiment. Hospice volunteers, he noted, perform a valuable doula-like role, "but if we're going to expect volunteerism to take care of people who're dying and to be present, I think we need to change that thinking," he said. People who choose to go into the field to perform what he described as an "essential human role" should be trained, supported and paid well.

As UVM's program reaches its one-year mark, MacDonald said she's interested in helping develop a second phase, in which participants would get hands-on experience.

Arnoldy said she plans to refine and expand the program according to the needs of the learners. "We have a lot of imagining to do, a lot of establishing to do and a lot of role defining," she said. "The people who're going to step into this work are pioneers, our trailblazers."

The original print version of this article was headlined "Good Endings"