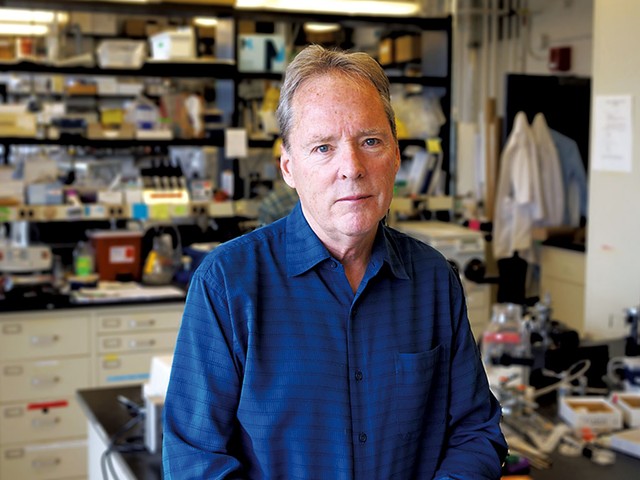 In the late 1970s, when Mark Nelson was working on his doctorate in neural sciences at Washington University in St. Louis, he had to attend a three-hour seminar every Saturday morning on the intricate workings of the brain and central nervous system. During those discussions, he recalled, the blood vessels of the brain never even warranted a mention.

Today, Nelson is a distinguished professor and chair of the department of pharmacology at the University of Vermont. This month, his groundbreaking research on blood flow in the vessels and capillaries of the brain earned him the single highest honor awarded to scientists short of a Nobel Prize: Nelson was elected to the National Academy of Sciences. He is one of only 100 new members elected this year to a body established by Congress in 1863.

Nelson isn't just the first UVM professor to earn this august achievement; he's also the first Vermonter to do so. How'd it happen?

"I don't even know the procedure," he confessed during a recent interview. "It's like the Freemasons."

Nelson was being modest. In 33 years at UVM, he's been among the most-cited researchers in the scientific community; one of the papers he authored has been cited more than 30,000 times. As department chair for the last 23 years, he has earned numerous professional accolades.

But Nelson is less inclined to describe his election to the NAS as a solo achievement than to deem it an honor paid to his entire laboratory staff, to UVM and to Vermont generally. His hope, he said, is that this accomplishment inspires the NAS to recognize the work of other equally deserving UVM researchers. As he put it, "I don't want to be the first and last person from Vermont in the Academy."

Nelson, 65, grew up in River Edge, N.J. His father, a World War II veteran, worked for chemical manufacturer Union Carbide as a journalist managing the company's technical literature. His mother was a public school art teacher. After completing his postdoctoral work in Germany, then Baltimore, Nelson took a position in Miami before moving to Vermont.

In recent years, much of Nelson's research has centered on small-vessel diseases of the brain, which, as he explained, are major contributors to dementia, cognitive impairment and stroke. That research has included study of CADASIL syndrome, a hereditary stroke disorder that affects about one in every 50,000 people.

Why focus on such a rare malady? Because small-vessel diseases generally account for more than 30 percent of strokes and at least 40 percent of all dementia cases. If researchers can untangle the physiology behind this hereditary disease, Nelson explained, it can help them better understand more common brain disorders and, ultimately, help cure and prevent them.

Such research couldn't be timelier, especially in Vermont. According to the U.S. Centers for Disease Control and Prevention, Vermont's rate of Alzheimer's disease, the sixth leading cause of death in the state, is projected to rise by 41.7 percent by 2025. Similarly, strokes are now Vermont's fifth leading cause of death. And as the state's population continues to age, Vermont will see a rapid increase in such age-related disorders.

Nelson admitted that he's still getting up to speed on what his responsibilities will be in the NAS; as one colleague joked with him recently, his primary task will be to keep other scientists out of this elite club. The body publishes one of the world's most prestigious peer-reviewed journals, the Proceedings of the National Academy of Sciences of the United States of America. It also helps set professional standards for scientists and makes policy recommendations on everything from climate change to agriculture to biomedical research.

One major difference between winning a Nobel Prize and getting elected to the NAS: The latter comes with no monetary reward — at least not directly. However, because UVM researchers often live and die by the grant money they receive — the College of Medicine gets about $70 million annually in federal funds, Nelson said — such professional recognition helps with landing future grants. They pay the salaries of the 15 to 20 international researchers who work in Nelson's lab at any given time. And that can go a long way toward improving brain health for Nelson and his crew — by lowering everyone's stress levels.

Nelson spoke with Seven Days about the role of blood flow in the brain, new research techniques and running marathons. His comments were lightly edited and condensed for space.

MARK NELSON: In college I majored in math and biology, and I wanted to do something quantitative [such as studying the] electrical signaling of nerve cells. Right now, what I mostly study is blood flow in the brain and how the neurons signal to the blood vessels to deliver blood rapidly on demand. The brain has about a thousand miles of blood vessels, most of which are capillaries positioned next to every nerve cell to deliver oxygen and respond to the demands of the nerves nearby. When this doesn't work, it's the main cause of dementia and cognitive decline.

SD: What are your primary tools of research?

MN: We do a lot of modeling. With the gene for CADASIL, the mutation that happens in humans is engineered into mice so that they have the same pathology. We'll look at them at the single-cell level and the blood vessels to isolated arterials and capillaries. In [a living organism], we can make a little window, and you can image the blood flow. And we have calcium sensors in different cells types, so we can watch the changes in calcium and blood flow simultaneously in a three-dimensional slab of the brain.

SD: Is there a holy grail in your work?

MN: Your brain is 2 percent of your body mass and uses 20 percent of the body's energy. That thousand miles of blood vessels in your brain are working moment to moment to keep everything in the body functioning. How does this happen? What is the impact of diminished blood flow in the brain? What's the impact if it's diminished over decades? And if you can correct it, what's the impact on dementia and cognition down the road? We don't know that yet.

When you have a major stroke, which is an occlusion of an artery, part of the brain dies, and the surrounding nerve cells hang on for life. If we can figure out how to turn on the blood vessels that feed the capillaries that feed this surviving area, and then direct more blood flow to those areas that need it immediately, that would be [one way] to keep as much of the brain alive as possible.

SD: Are you referring to neuroplasticity?

MN: Neuroplasticity is when you can change the behavior of the neuron by changing its stimulation or, if it's a sensory thing, changing a visual or tactile input. The question is, can we change the blood vessels if they're stimulated more often? We're testing this [theory] by moving the whiskers of a rodent. That's a major sensory input [for rodents] because they're always whisking, or sensing, air eddies. You can stop those whiskers from moving and then look at what happens in that part of the brain and its ability to respond two weeks later to an increase in activity. We have preliminary data to suggest that, in fact, the strength of the signal from the capillaries upstream decreases with a lack of use.

SD: So it's a use-it-or-lose-it scenario?

MN: It probably is. We've also done models with blood flow in the amygdala, [the area of the brain where you experience] anxiety and fear, which was greatly compromised after a week of chronic stress. So real chemical changes, either by cortisol or other [hormones], can change the robustness of how blood vessels signal to deliver blood to the right place. This is a very topical issue right now because many people experience chronic stress, such as those with PTSD. The question is, how reversible is it? Some of these changes persist for a long time after the stress is gone. So there are all sorts of implications.

SD: Are you using research techniques now that were unimaginable when you entered this field?

MN: That's a picture of blood vessels that we've color-coded as they go deeper into the brain. [See above image.] The microscopy techniques have improved unbelievably, so I can measure something that happens in less than a micron — a millionth of a meter — with resolutions down to a millisecond. So we're talking about changes in blood flow that happen in under a second.

SD: How do you keep your own brain healthy?

MN: Aerobic exercise and keeping your blood pressure low are about the two best things you can do right now. So I go running every day. Now I'm doing four to seven miles. I used to run the Vermont City Marathon. I haven't run it in a couple of years, but I've done it about 14 times. My other big accomplishment is winning first place in the 50-to-54 [age] category in 2004.

MN: Another obvious one of sleep. Your circadian rhythms are a powerful controller of bodily functions, and [long-distance air] travel is one way to really destroy it.

When I majored in math, I never took an exam when I was tired because my brain wasn't clear. I can't do any writing or anything quantitative when I'm tired. When it comes to managing stress and a healthy work-life balance, I don't always practice what I preach. But I can tell you that training for a marathon is not the only way to do it.