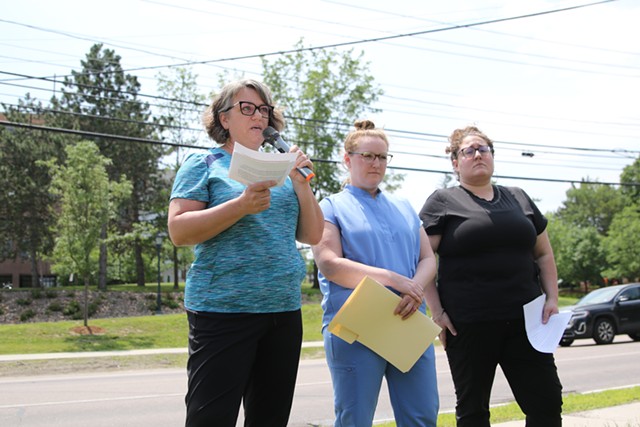 A trio of nurses from the University of Vermont Medical Center staged a press conference on Thursday to make a public plea of their bosses: Protect us.

They described an alarming array of physical and verbal attacks against nurses and other staff, which, according to data from the hospital, have occurred an average of 60 times a month this year.

Roughly half of those incidents occurred inside the emergency department, where staff have been strangled, suffered broken bones, been spit on and threatened with weapons, the nurses said. On one single shift last week, three ED nurses were assaulted, each requiring medical attention.

The attacks, while not unheard of before the pandemic, have become far more common during it, the nurses said, and yet hospital leaders have responded with only empty promises. They demanded action — and fast.

"Workplace safety is the responsibility of our employer," said Eisha Lichtenstein, one of the nurses. "We do not feel that the UVMMC administration has done everything in its power to protect us."

UVM Medical Center president Dr. Stephen Leffler, who has worked in the emergency department his entire three-decade career, confirmed in an interview Thursday afternoon that the hospital has seen a "huge" increase of violence over the last few years. He said the hospital was committed to making the emergency department a safer place and was already working to fulfill many of the nurses’ requests. But he said it may take time due to staffing shortages.

“It breaks my heart," he said of the nurses’ concerns. "I worry about it every day. I'm losing sleep worrying about this. I want our staff to feel completely safe when they come to work.”

"We are taking this seriously," he added.

Workplace violence has long been a concern in the medical profession. That's particularly true for emergency department nurses, who routinely deal with people at their most vulnerable points: patients in mental health crises or having a bad reaction to drugs; families receiving devastating news. A 2018 analysis by the U.S. Department of Labor showed that health care workers suffered roughly three out of every four nonfatal workplace injuries caused by violence.

The pandemic, which added yet another layer of stress and instability on most people's lives, has only worsened the problem. But while some violent patients suffer from mental health or substance use issues, many others are acting “out of frustration, anger and entitlement,” said Amanda Young, an ED nurse.

Noting that the Burlington Police Department routinely reports that it cannot immediately respond to incidents at the hospital because of staffing woes, the nurses called on the hospital to beef up its own security presence.

They called for armed officers and demanded that the hospital turn on a metal detector that has been collecting dust for months. “I've personally taken a cocked and loaded gun off of a patient with absolutely no skill set in doing that myself,” Young said. Vermont lawmakers passed a bill this session banning weapons from hospitals; it goes into effect July 1.

Before the hospital can use the metal detector, though, it must hire more security officers, Leffler said, since not just anyone can staff the machine. “You have to be able to identify when someone potentially has a weapon, search them and take it away from them,” Leffler said. The hospital is now trying to hire eight security officers to fill out its 36-member force.

According to the hospital, the average security salary is $19.45 plus benefits. The nurses say more money should be dedicated to the task, while the hospital says it cannot afford to pay more.

Meanwhile, the hospital has directed its existing security force to have a greater presence in the ED. There are now a minimum of two officers covering the department at all times, with a third on site from 4 p.m. to 7 a.m. each day.

But diverting any more officers there would short-hand other departments, where incidents also sometimes occur. It’s also not the same as having police protection: Security guards at UVM do not carry guns or tasers and have been victims of assaults themselves, the ED nurses said.

The hospital says it wants to establish a police presence within the ED and is willing to pay for coverage and training. But local police agencies are suffering from their own staffing woes and have all had the same response to Leffler’s requests: “None of them have the manpower,” he said.

The prospect of cops patrolling the hallways of Vermont’s busiest hospital likely won’t be embraced by everyone, particularly given that one of Burlington police’s most highly criticized use-of-force incidents occurred right outside of the medical center.

In March 2019, UVM security officers called for police assistance in response to an upset man who had been denied access to see his wife inside the hospital. A BPD officer who responded got into an altercation with the man in the hospital’s ambulance bay and punched him, breaking several bones in his face. The man, Douglas Kilburn, was hospitalized, then found dead in his home a few days later. The city reached a $45,000 settlement with Kilburn’s wife last year.

But unless the hospital finds some way to make the ED safer, it will continue to lose qualified workers, the nurses said.

That includes Megan Martin, one of Thursday's speakers, who said she's leaving her job at the ED to go work as a school nurse. As a flight nurse who spent time in the Middle East, "I'm very familiar with having to place myself in harm's way — for the right reasons," she said.

"These are not the right reasons."