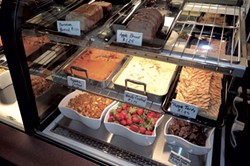 Most hospitals wouldn't inspire a visit from a food luminary. Yet in April 2014, Chez Panisse owner and slow-food pioneer Alice Waters visited the University of Vermont Medical Center to see its food service at work. During the tour, director of nutrition services Diane Imrie previewed work on a groundbreaking new restaurant in the Garden Pavilion, adjacent to the hospital's rooftop gardens. Last week, the Garden Atrium finally opened.

A vegetal theme pervades the wood-paneled space, which opens onto the gardens that provide daily specials to the restaurant. Recent ones have included pepper sauces made from house-grown produce, and dishes featuring the garden's kale, chard and herbs.

Executive chef Richard Jarmusz has created the hospital's most diverse menu to date, relying on 100 percent local dairy, meat and poultry. At breakfast, that means pain perdu (identified on the menu as "lost bread") made from butternut challah and served with local honey, seasonal berries and a molten custard incorporating ricotta from Tunbridge's Mountain Home Farm.

At lunch, braised pork sliders and other fleshy features come from Black River Meats. "We're really expanding so we can use more different cuts," Imrie says of adding the bigger producer to smaller longtime partners such as Vermont Family Farms and chicken supplier Maple Wind Farm.

For a more complete meal, there are small plates and entrées, which get no pricier than the Southwestern Salad and New England Fish Cakes, at $6.75 each. The apps include carrot fritters served with greens that are tossed in cranberry vinaigrette, and seasonal locavore meat-and-cheese plates.

In the summer and early fall, such produce is plentiful, but what will happen when the chill sets in? Imrie says the garden itself will close, but not the Garden Atrium will rely on a new deal with Jericho Settlers Farm. "We helped them build a biomass-heated green house," Imrie says. "We're going to be their prime customer for winter supply, which extends the season for us." In total, 50 percent of the produce served at the restaurant will be certified organic, not including food from farms without certification.

Garden Atrium's attractions go beyond the ingredients, Imrie emphasizes. All food is cooked to order, and a GPS tracker allows staff to bring the finished meals straight to customers. "It's really intended for families who are under stress," she says.

And that peaceful vibe no doubt will also appeal to diners who come simply to enjoy the local bounty in an unexpected setting.

The original print version of this article was headlined "Garden Fresh"