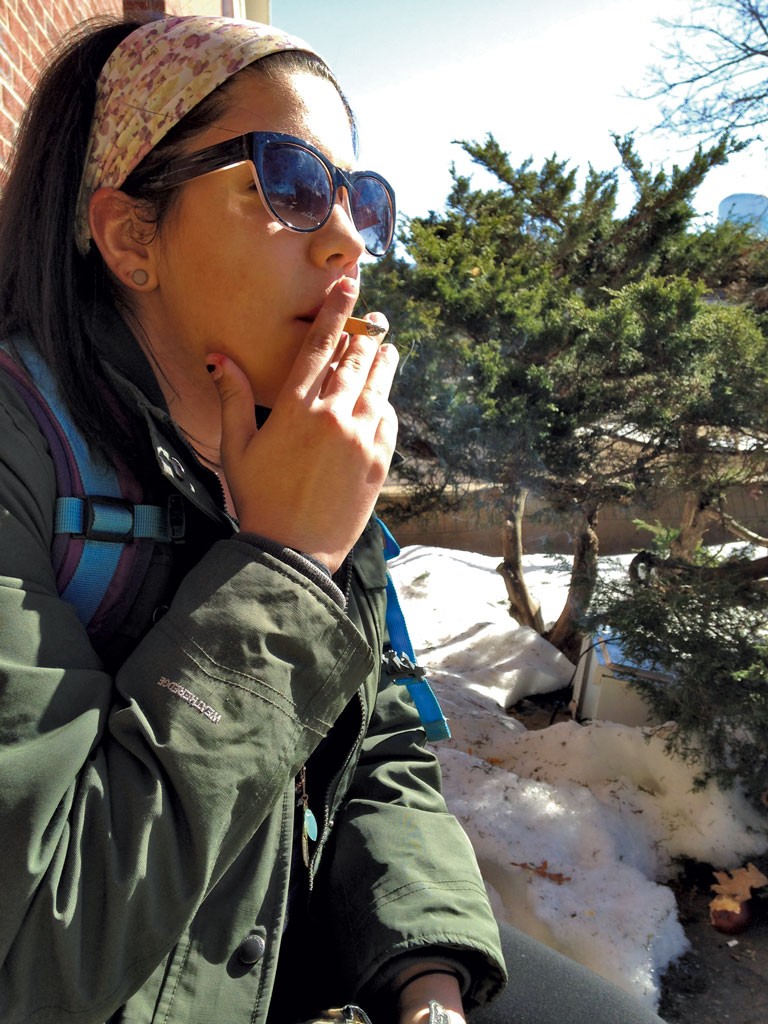 Some cigarette smokers show respect and others are rude, as Haley Agront sees it. The 19-year-old University of Vermont student won't smoke in front of children. She lights up mostly in designated smoking areas, such as the one on the side of the library, where she sat on a bench between classes last week, nursing a Newport.

Agront accepts existing prohibitions on smoking indoors. But she opposes a proposal to ban tobacco altogether from the UVM campus. The new rule was supposed to go into effect in January but stalled partly due to objections from students.

College students are adults, and they should be free to make decisions about their own health, according to Alex Dickinson, a 21-year-old junior from Essex Junction majoring in philosophy and religion. The proposed ban "makes us feel like the school is saying we're too stupid to understand the consequences of the habit we've chosen."

"I just don't agree with the fact that I should have to walk, like, 12 minutes off campus to smoke a cigarette," said Agront.

The New Jersey freshman has smoked since she was 15. She argued that if the goal is to make people quit, the ban will fail. The resulting hassle might make her smoke less, but not give it up, Agront predicted. "If I want a cigarette, I'm going to smoke a cigarette," she said.

Now that the public health war against smoking has eradicated cigarettes from much of the indoor world, the smoke-free campaign is going outside. Municipal outdoor spaces such as Burlington's Church Street have recently banned smoking, and many colleges are kicking smokers off their greens.

Approximately 1,500 college campuses are smoke-free, and UVM should join them, said Dr. Jan Carney, cochair of the UVM Tobacco-Free Steering Committee, which is pushing for the ban.

She ticks off her reasons: There is no safe level of exposure to secondhand smoke, according to the U.S. surgeon general; cigarette butts are an environmental problem; and the ban, she believes, will help reduce smoking rates. 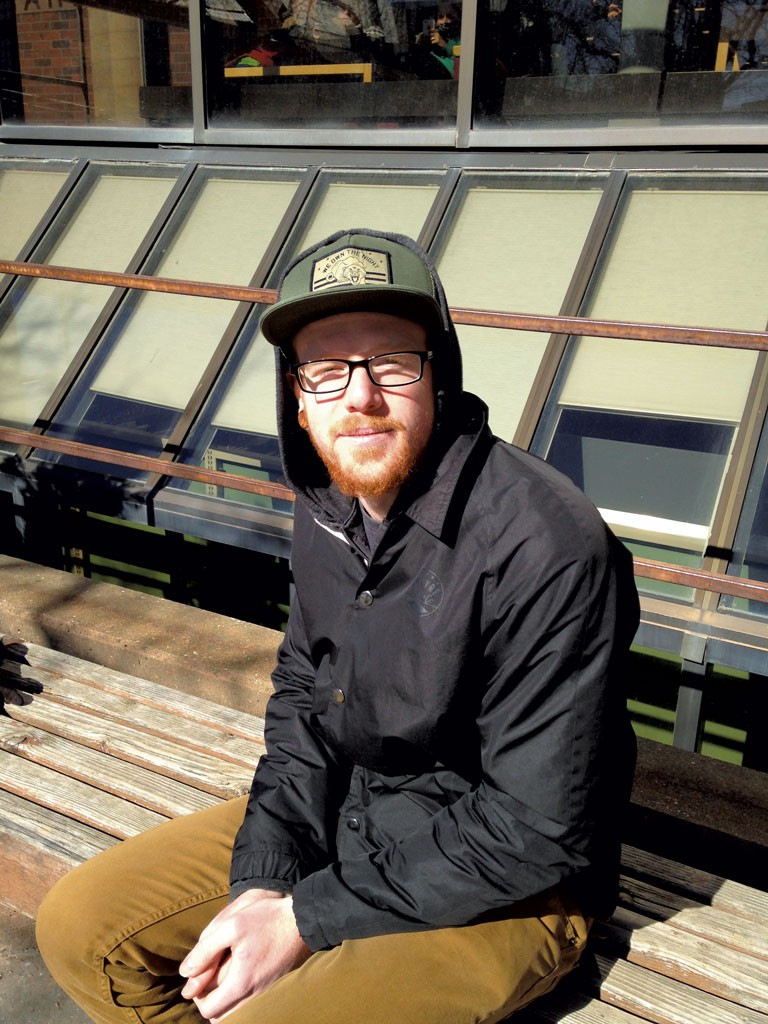 Studies since 2000 indicate such restrictions can help make nonsmoking the social norm, said Carney, associate dean for public health at UVM College of Medicine and a former Vermont health commissioner. As a result, some people quit and others never start, Carney said.

Tobacco use remains the No. 1 cause of preventable death in Vermont. Smoking causes heart disease and various cancers. Roughly 75,000 Vermont adults smoke, and half of those who keep it up will die of tobacco-related causes, according to the Vermont Health Department.

The percentage of Vermont adults who smoke dropped from 21 to 17 between 2000 and 2012. The health department goal is to reduce that number to 12 percent by 2020. It's against the law to light up in Vermont workplaces, restaurants and bars. Many other states have similar restrictions, although Vermont was out front in the smoke-free bar movement.

College-educated adults tend to smoke at lower rates than adults without a degree. But a significant number of college students do smoke, and some never quit. Roughly a quarter of student smokers at UVM start when they come to the school, according to a survey cited by Carney.

She said other colleges have found it takes two to three years to successfully roll out a ban, and UVM wants to take the time to do it right. "You just don't flip the switch," Carney said, noting that the university has been working up to zero tolerance for tobacco with surveys, forums and quit programs targeting students and employees.

But a total of 15 people attended four town-hall-style meetings on the proposed ban, said Carney. Most asked basic questions about the proposal and there was no real debate, she added. The low turnout contributed to the decision to delay implementation of the ban to "ensure that we really had made our best effort to have a campus-wide process," Carney said.

Other Vermont colleges ban smoking inside buildings, including residence halls, and to varying degrees near them. At Saint Michael's College, smoking close to building entryways is a no-no; Champlain College restricts smoking close to all buildings on campus, especially dorms. Outdoor smoking is banned within 25 feet of residence hall entries and operable windows at all times.

UVM president Tom Sullivan will ultimately decide whether and when to implement the ban at the state university. His decision is expected this semester. It's unclear what penalty, if any, would be imposed for violations.

Jordan LaFond, a 19-year-old sophomore from Georgia, Vt., believes the ban should have been implemented as planned in January. Many students ignore current UVM rules, she said, including the one prohibiting smoking within 25 feet of the entrance to buildings such as the library.

As LaFond spoke on a recent morning in front of the library, several students puffed away in plain view about 15 feet from the main entryway. Cigarette butts lay in the melting snow by the library's front steps, despite bright blue smoke-free-zone signs plastered on nearby columns and benches.

Administrators pushed to reduce smoking on the steps in 2013 after students complained about tobacco clouds that formed near the door. That's reduced but not eliminated the problem, according to students.

It's time for the school to push antismoking programs harder, said LaFond. She has no sympathy for the habit. "My grandma died of lung cancer because of smoking, so I haven't touched a cigarette in my life," LaFond said. "Never will I ever try it, and I think it's a gross, disgusting habit."

LaFond supports the Church Street Marketplace smoking ban, which was implemented in December. If the city can do it, she implied, why can't UVM?

A quick walk down to Church Street from campus that same morning showed that the ban there is not uniformly obeyed. A woman smoked a cigarette on the Marketplace in front of the entrance to the Burlington Town Center, ignoring multiple signs instructing smokers not to light up.

But there were fewer smokers — and cigarette butts — in that location than before the ban took effect in December. Many have since moved to side streets, and their migration has generated new complaints about secondhand smoke and cigarette-butt litter at spots such as the sidewalk on the north side of Cherry Street, between Church Street and the Vermont Health Department.

Employees at the health department have raised concerns about the new smoke spot. "They were very vocal, saying 'What have you done?' said Ron Redmond, executive director of the Church Street Marketplace.

Other employers downtown also complained about the problem moving to new coordinates.

In response, the Church Street Marketplace is putting up signs this week to make clear that the no-smoke zone encompasses portions of side streets off Church between Main and Pearl, including the problem spot on Cherry.

Tickets for violating the policy can run $50 to $100, but enforcement efforts so far have stressed education, not fines, Redmond said. Most of the feedback about the ban has been positive, he added.

Still, some of the ex-Church Street smokers feel persecuted. "I don't think it's right ... Who is anybody to tell you what to do?" asked Daniel Gomez, a maintenance worker. He clustered with other smokers last week at the new gathering place by the health department.

Whatever antismoking program might come out of that building will be tough to sell to Gomez. "I've been smoking since I was 16," he said. "You can't just tell me to quit."

But others said the ban is improving the street, and some of those encouraging voices belong to smokers. Puffing next to Gomez, Christopher Thompson said a group he considers to be a "bad element," people he believes are heroin addicts and drug users, isn't congregating as much in front of Burlington Town Center. That's a good thing in a place that wants to cater to families with children, he said.

"It's still going on, but it's less than what was going on," said Thompson, who does maintenance work for the Church Street Marketplace and observes the scene on a daily basis.

Thompson never smokes in front of his own son, and since the ban, he reasoned, children who visit the Marketplace aren't seeing as much smoke.