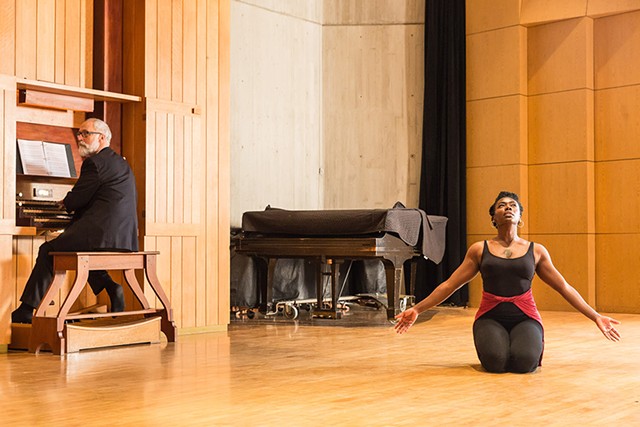 Christal Brown's bare feet are more articulate than most people's faces. She flies across the stage, filling the space with geometric pathways. Her floating extensions match the soaring sounds from an enormous, ceiling-high Fisk organ, commandeered by David Neiweem, which in turn duels with the Klop portable organ played by student Adam Sullivan. At the back of the hall, Paul Besaw takes notes on a laptop.

Brown is a dancer, choreographer and assistant professor of dance at Middlebury College; Neiweem is a professor of music at the University of Vermont. They're rehearsing at the university's Recital Hall for their piece in this year's Solo Workshop. Founded by Besaw, a UVM associate professor of dance, the project showcases the talents of faculty members who have worked together during the fall and winter to create something altogether new. This is the fifth year of the Solo Workshop, copresented by UVM's Lane Series and Department of Music and Dance, but the first in which university faculty members have been matched up with peers from Middlebury College.

Accordingly, this year's public presentation — called "Doubling Down" — will be performed at both the Recital Hall, on Friday, February 19, and at Middlebury's Mahaney Center for the Arts the following night.

Besaw and codirector Patricia Julien, a UVM music professor, paired musician-composers with dancer-choreographers. Some of the musicians perform live and even interact with the dancers onstage.

"It was always going to be multidisciplinary," says Besaw, referring to the collective process of the Workshop. "We are going to have influenced each other and heard from each other all along the way."

"It has been extraordinarily fruitful in terms of cross-pollination," adds composer and pianist Julien. "Now I think, Why not incorporate movement into a music performance?"

During a rehearsal break, Neiweem sits down at the edge of the stage. "Did you know the composition is based on two pieces of scripture?" he asks a reporter. His piece, titled "Two Biblical Dances," is inspired by New and Old Testament stories involving dancers and beheadings: Salome and King David. "I didn't think I'd find someone to take this on," he says.

Brown appears unfazed by Neiweem's challenge. "Any time I'm dancing," she explains, "I'm using the gifts that God gave me." Dancing is Brown's spirituality. "Of course, it might not look like praise dance," she adds, referring to a form of worshipful movement that is practiced in some churches.

Indeed, Brown's dancing is an emotional, not literal, interpretation of the biblical stories, though it conveys the grandness and intensity of the subjects. Both her dance and Neiweem's music are contemporary.

"Doubling Down" includes four more pieces. "Templates/Temples," performed by Besaw with music composed and cued live by Peter Hamlin, is adapted from original choreography by Jan Van Dyke. The music is generated by a computer program that gathers data from the movements of the performers. Burlington artist Winnie Looby designed the costumes.

The piece "to scale" is choreographed and performed by Tzveta Kassabova, with trumpet composition and performance by Heimo Wallner. Besaw says that Wallner explained his piece to him simply as "A ladder. A woman. A trumpet. A man."

"Songs of Our Grandmothers" is choreographed and performed by Burlington dancer Selene Colburn, with piano composition and performance by Kathy Wonson Eddy. This collaboration also incorporates two poems written by the women's grandmothers: "February Miscellany," by Gladys LaFlamme, and "Night Sounds," by Agnes Choate Wonson.

Finally, "There is no need, and no desire" is choreographed and performed by Scotty Hardwig, with music composed by Julien and costumes designed by New York-based artist Kern Samuel. The piece is described as "an investigation of the experience of feeling depleted and broken, yet continuing to move, live and create."

Hamlin, Kassabova and Hardwig are faculty members at Middlebury College, while Wallner and Wonson Eddy have past affiliations with the school. Lighting was designed by Bert Crosby in the Recital Hall and by Jennifer Ponder in the Mahaney Center's Dance Theatre.

Five dancers, six musicians, 10 "solos" in all. "Doubling Down" is more than the sum of its parts.