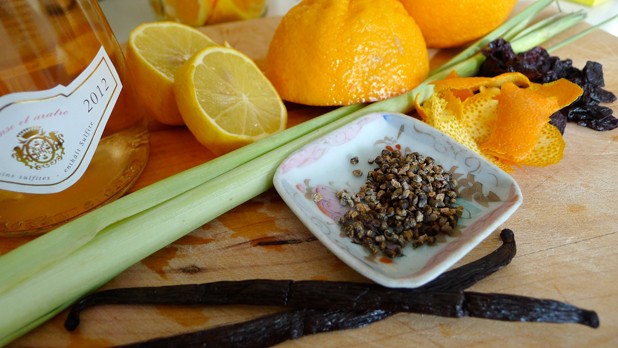 When winter settles in, our homey, DIY tendencies can emerge: knitting hats, scrapbooking, organizing those vacation shots on iPhoto or … making vermouth?

It may not be the most traditional of crafts, but rendering your own infused wines, syrups and bitters is immensely rewarding. If the prospect sounds daunting, it shouldn’t. Bitters and vermouth may seem like exotic cocktail ingredients, and they can add beguiling complexity to cocktails, but they’re fairly straightforward to make. That is, once you’re armed with vodka, wine or rye, bottles and an assortment of barks, fruit peel, herbs, dried fruit and seeds that you can pick up in most natural foods and herb stores.

The most costly ingredient is patience: Bitters require weeks to mature, and it takes months to realize the flavors of vins de maison — or home infused wines. Yet, if you get to work now, by the time the lilacs bloom you’ll be ready to uncork bottles you stashed away during winter’s long nights. Then you can pour a glass, fill a plate with pistachios and salty cheeses and toast to your foresight (and to the balmier weather).

If you can’t wait that long, some of the elixirs detailed here make for the perfect winter drink: a Manhattan. So get cracking.

For early Americans, “taking some bitters” was a daily morning ritual. Within reach of the breakfast table were tiny vials of booze — often Madeira, rum or brandy — infused with such “medicinal” ingredients as juniper berries, mint, dried orange peel, spicebush berries and mugwort. These elixirs were believed to stimulate the digestive system, among other organs, and often had entertaining names — whiskey skin, fogcutter and timber doodle along them.

Bitters’ fortunes have risen and fallen with the decades, but they’re currently undergoing a full-on revival, with dozens of brands having hit the market in the past few years. Once you begin using bitters in your cocktails, you may get addicted to snapping up unusual bottles made with flavors such as rhubarb and celery.

It’s just as easy, and cheaper, to make bitters at home, and their versatility makes them a blank canvas onto which you can project your wildest flavor fantasies. Nearly any botanical, dried or fresh fruit or herb can be commandeered: lemongrass, cola nuts, hibiscus, dandelion. The only other things you need are alcohol and a tinted dropper bottle. Steep your chosen ingredients in alcohol for a few weeks, and they’re good to go.

My personal darling of the moment is Woodford Reserve Spiced Cherry Bitters, so I decided to make my own version. But I added a favorite spice: cardamom. While some recipes call for dividing your ingredients into layers before blending — the flavoring agent (such as peach leaves or rhubarb), the spice element (such as cinnamon or pepper) and the bittering agent (usually gentian or wormwood), this method is easier for the novice — including me.

Put cherries and other dry ingredients into a Ball jar, then top with rye. Shake to blend and store in a cool, dark place for two weeks, shaking once daily. Decant into tinted stopper bottles. Bitters will keep for up to a year, and do not need to be refrigerated.

The apéritif tradition may be more pervasive in France than in the U.S., but the before-dinner ritual of sipping a light, refreshing liqueur — such as Pastis — with salted nuts or olives deserves to be enjoyed everywhere. If you’re served apéritifs in a French home, they might include a vin de maison, or a homemade wine that has been infused with anything from young peach leaves (vin de pêche) to green walnuts (vin de noix) to cherry leaves (Guignolet).

Most of those leaves and fruits are distant memories in the depths of winter. But, since the key to making a vin de maison is socking it away in a dark place for months to develop its flavors, the time is nigh to make vin d’orange, or rosé wine left to macerate with orange peel and spices until it becomes a spicy-sweet, refreshing liqueur.

Vin d’orange is traditionally made with bitter Seville oranges, but given the difficulty of finding those, navel oranges are a decent substitute. Combine their peels and parts with a bottle of dry rosé, vanilla, cinnamon and sugar and let the mixture sit for 40 days. You’ll be rewarded with a drink that’s been a staple of the early evening in France for centuries.

Preheat oven to 200 degrees Fahrenheit. Peel two of the oranges, removing the white pith, and dry peels in the oven for one hour. Press juice from the two peeled oranges, then cut the remaining two into wedges.

Combine wine, peels, juice, wedges, vanilla bean, cinnamon and sugar in a large glass jar, cover and put in a cool, dark place. Shake once every day for about a week until sugar dissolves. After 40 days, strain the wine through muslin into a nonreactive container and discard solids. Decant wine into a self-corking bottle, label with the date and stash away again for two or three months. Once opened, the vin d’orange will keep in the refrigerator for up to a year.

If the only vermouth you’ve ever tasted is labeled Martini & Rossi, you’re missing out on a world of seductive flavors. While cheap vermouth is workable for basic martinis and Negronis, handcrafted, artisanal vermouth can bring those same drinks to loftier heights.

What is vermouth, exactly? Wine that’s been fortified with a hard spirit and flavored with herbs, spices and roots, sometimes a dozen or more. Sweet vermouth is often rust-colored with luscious, spicy, sometimes figgy notes — a tasty winter tipple when served over ice. Dry vermouth is lighter and more savory, offering subtle hints of herbs and botanicals.

Vermouth makers often jealously guard their recipes, but most start with white wine and a bittering agent such as wormwood. While wormwood can be hard to find locally — some herb stores have it both dried and in tincture — aniseed can be used as a substitute. I used the following recipe to render what should have been sweet vermouth, but the end product’s zesty flavors fall between sweet and dry. One of the many virtues of vermouth is that you can experiment with each new batch — try your own combination of peels, spices and dried herbs.

In a saucepan, heat sugars and 2 teaspoons of water over low heat, stirring constantly, until the mixture begins to turn brown and caramelize, about five minutes. Remove from heat and let cool. Set aside.

Pour 1 cup of the wine into a saucepan, add all spices and bring to a boil. Reduce heat and simmer for five minutes, then remove from heat. Once cool, strain the infused wine through muslin to remove solids, squeezing to extract the flavors. Discard solids.

Heat 1/2 cup water in a saucepan and slowly spoon in caramelized sugar, stirring until incorporated into a simple syrup.

Combine infused wine, remaining wine from bottle, sugar syrup, sherry and brandy in a self-corking glass bottle. Turn over several times to combine, then label and refrigerate. Vermouth is ready to consume once combined, but its flavors will improve with time. Sweet vermouth will keep for up to a year in the refrigerator.