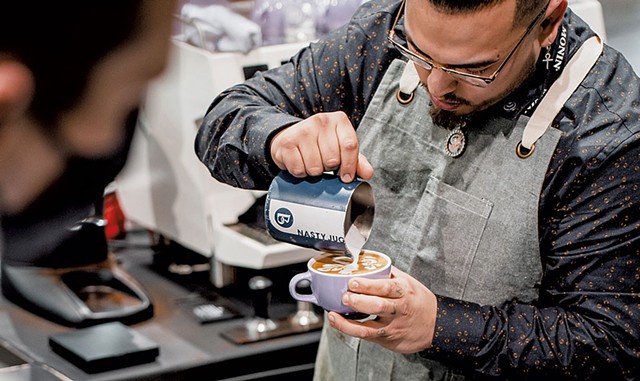 Coffee pros from around the country converge on Chittenden County this weekend to test their tasting, barista and latte art skills in the first stage of qualification for a prestigious national coffee competition.

From Friday, October 28, through Sunday, October 30, Brio Coffeeworks in Burlington and Uncommon Coffee in Essex will host some of the preliminary competitions for the 2023 U.S. Coffee Championships. In three events, more than 40 individuals will compete, including local representatives from Carrier Roasting, Iluminar Coffee, Little Seed Coffee Roasters, Onyx Tonics, Scout, Uncommon Coffee and Vivid Coffee. The events are free and open to the public.

The prelims are the entry point for competitors hoping to qualify for the USCC national finals, held in Portland, Ore., during the Specialty Coffee Expo in late April.

Uncommon and Brio were two of 13 companies from around the U.S. selected to host the prelims this year. It's the first time Vermont companies have hosted.

"The competition is super niche," Uncommon co-owner Maya Crowley told Seven Days. "But it's a ton of fun. You get to come together with coffee people from all around the country, do the thing you love and be unapologetically nerdy about it."

Brio will host the U.S. Cup Tasters preliminaries, which test competitors' sensory skills in evaluating coffee. Each person will receive five "triangulations," to use competition lingo, composed of three cups of coffee, two of which are identical.

"Participants are challenged to taste, smell, recall and choose the unique cup in each triangulation," Brio cofounder and president Magda Van Dusen explained in a press release. "The person with the most correct answers in the shortest amount of time wins."

The Cup Tasters event can be exciting to watch, even for the uninitiated, Crowley said. "It's pretty suspenseful," she added.

Uncommon will host both the U.S. Latte Art and the U.S. Barista preliminaries. The former is another fun one to watch, Crowley said: Competitors present a photograph of a design they're going to pour and have to replicate it twice, as exactly as possible.

"It's amazing," she said. "Competitors pour different animal designs and things you wouldn't normally see in a coffee shop."

In the U.S. Barista competition, competitors serve two espressos and two milk drinks to a panel of judges, who score them based on competitors' technical skills and how accurately they've described how the drinks will taste. The nuances of that competition are harder to convey to onlookers, who don't get to taste the drinks, Crowley said.

The local coffee community will be out in force all weekend, celebrating with open houses, latte art and tasting workshops, a latte art throwdown, and a costumes-encouraged party at Brio and neighboring Venetian Soda Lounge on Saturday from 7 to 10 p.m.

"This is probably the biggest thing that's ever happened in coffee in Vermont," Crowley said. "I'm really excited to be welcoming so many amazing coffee professionals from around the country — and to show off our really cool coffee scene here."

Find the full schedule of events at vtcoffee.org.

The original print version of this article was headlined "Hot Shots"