At six feet, seven inches, Abdoulaye Niane towers over almost every crop he tends at his half-acre urban farm, located behind his family home in a quiet Berlin neighborhood just off Route 302.

The sunflowers along the back fence of Khelcom Farm are a notable exception. "This is the first time I grew sunflowers," Niane, 49, said with a grin. "They are as tall as me."

This year's growing season also marks the first time that the Senegalese native and former machinist has run his own farm and raised vegetables for sale there.

He spent May through October of 2021 participating in the hands-on University of Vermont Farmer Training Program, based at the Catamount Educational Farm in South Burlington. "It is a great program," Niane said, noting that he has stayed connected with instructors and fellow students, who continue to support him.

To establish the small farm, Niane reclaimed soil from under the lawn that covered the family's double-lot backyard. It now blooms with 54 100-foot rows of vegetables, herbs and flowers.

"This is what I want to do the rest of my life." Abdoulaye Niane tweet this

On a hot day at the end of July, more than 1,000 garlic heads lay drying under a red tent. Niane showed Seven Days around the compact, densely planted farm with his wife, Marja Makinen, 38, who helps out when her job as a nurse allows. A flock of chickens and a few ducks clucked and quacked from their roomy pen.

The couple attends the Barre Farmers Market and sells their harvest from an on-site farmstand and to a handful of wholesale accounts. They've also landed an alternate slot at Capital City Farmers Market in Montpelier, where they sold for the first time on Saturday.

Soil is not the only thing Niane has reclaimed with every gentle push of his broadfork into the ground. The career change has also helped him heal and move on from challenges he endured in his former profession, he said.

Over the 11 years since Niane moved to Vermont, life has not always been easy, the couple said. They declined to share specifics, but Makinen said, "There've been some tough times for Abdoulaye and us as a family ... The farm is a healing place and a safe place."

The couple met in 2012 at Red Square in Burlington and married five years later. They have three children: Zaal, 9; Khadim, 4; and Rokhaya, 1. Their baby daughter already knows how to pop sweet ground cherries out of their papery husks and into her mouth.

Zaal loves to help harvest, and his younger brother is the unofficial farm tour guide, Makinen said: "If he sees someone pull up to the farm, he runs out and yells, 'Welcome to the farm!'"

These joyful moments underscore the positive ripple effect of their father's new profession.

"I would call it freedom," Niane said. "This is what I want to do the rest of my life. I'm having fun doing it with family and friends." 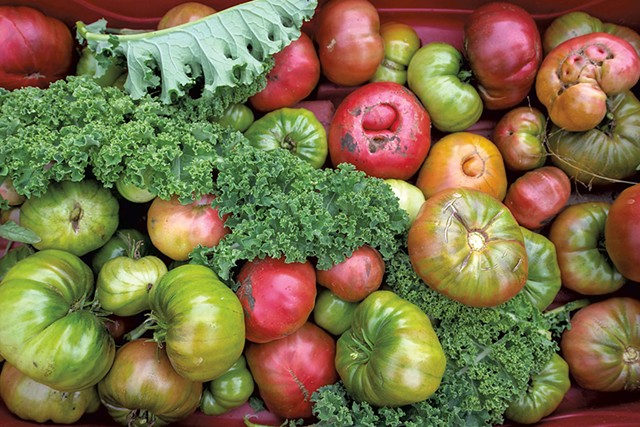 As Niane has switched careers, the family's community has buoyed them in new ways, they said. The practicing Muslim was touched when one of his UVM instructors approached him to suggest a quiet place he could pray during program breaks. A neighbor came over to lend his walk-behind tractor last fall before the family bought their own.

Two local farmers, one of whom teaches in the UVM training program, provided free greenhouse space and lots of seeding advice in the spring. The husband of one of those farmers has shared bookkeeping guidance, and a fellow training program participant supplied worms to help jump-start the farm's compost operation. Neighbors have helped spread the word about the farmstand.

One neighbor, Hannah Conner, happens to be the café and kitchen manager at Red Hen Baking in Middlesex. She wrote by email that she is "so happy that [Niane and Makinen have] brought such a vibrant farm to our neighborhood."

She was equally happy to become a wholesale customer of Khelcom Farm. Red Hen Baking has fire-roasted the farm's eggplant for baba ghanoush to go on sandwiches and featured its heirloom tomatoes on pizza. Conner has also bought the farm's radishes, garlic scapes, broccoli, jalapeño and shishito peppers for the café.

"It is really impressive how much food they are churning out of such a small plot of land," Conner wrote. "This spring, every time I looked out of my living room window I would see Abdoulaye hunched over a row ... Now, to be able to support them and reward his efforts is really special."

"All these people [who] try to make you successful, that feels good," Niane said. "I just want to be grateful."

Practicing thankfulness and working hard are key tenets of Niane's faith, which plays a major role in his life, he explained.

Niane was 24 when he left Senegal in 1996, part of what he called l'exode, using the French word for the exodus of young people seeking better opportunities. "Everybody wanted to get out," he said. "Leaving means going for success."

After a brief time in Paris, Niane landed in northern Italy. He eventually made his way to New York City in 2009.

"I grew up with that American dream," Niane said. Even though the reality of achieving the dream is complicated, he continued, "I know millions of people want to come here."

From New York, he moved to the Minneapolis area, but city life was not for him, Niane said. He came to Vermont in 2011 to visit a Senegalese friend who lived in Waterbury and was smitten from his first Camel's Hump hike.

Niane has a general mechanics degree from Senegal but has always been interested in farming. Even in the capital city of Dakar where he grew up, he said, "No matter how tiny your house, you find a corner for a couple lambs and chickens."

Niane and Makinen named their farm after Khelcom, a village in Senegal. "It was created to give food sovereignty, like freedom, to the population," he said. "It's also an educational village. They teach kids the Koran and religious practices, and they teach them how to work the ground, [about] agriculture in general." 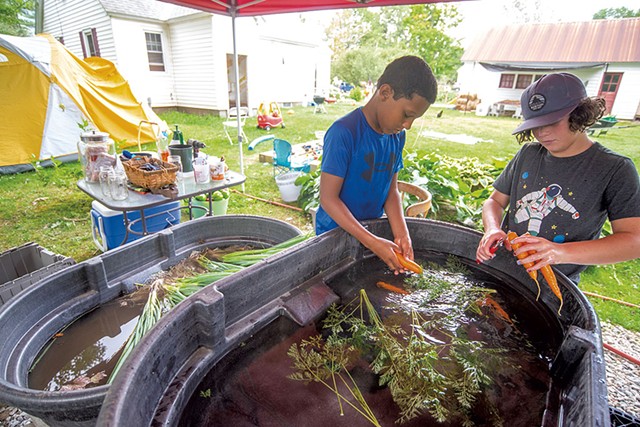 The village of Khelcom was established by the son of Ahmadou Bamba, a Muslim leader during the late 1800s and early 1900s. Bamba founded the Mouride spiritual community, a branch of Islam to which Niane belongs, and led the pacifist resistance to colonialism in Senegal.

"I am a follower of Sheikh Ahmadou Bamba," Niane said. "He worked without weapons."

Niane also follows the guidance of his spiritual leader regarding the power of hard work.

He distinguished himself in the UVM Farmer Training Program, instructor Kate Breimann said. Despite his hourlong commute, "Abdoulaye showed up every day early with a smile, ready to tackle whatever needed to be done," she said. "He was such a source of the best possible energy, and the sheer work ethic he had as a student — you see it in what he's been able to accomplish with his farm."

Breimann recently visited Khelcom Farm. "The first thing that struck me," she said, "was the amount he was able to grow in a space that was not intended for farming." She praised Niane's careful attention to plant care and to every tool and technique deployed.

"He's thought through it all and is always looking at ways to improve," she said.

On a walk around the farm with this reporter, Niane admitted that he had underestimated how big the tomato plants would grow. "I used string that was not strong enough," he lamented.

To deter unwanted animal visitors, the farmer built a 600-foot-long fence, hand-pounding the sleeves for each of 50 eight-foot fence and gate posts. Still, a groundhog found a way in to dine on the kale, Niane said ruefully.

There have been plenty of wins, too, in Khelcom's inaugural season. Niane paused to peer under the lush foliage of some hot pepper plants. "Check this out, Marja," he said to his wife excitedly, cradling a ripening habañero.

Niane is growing a number of other hot peppers, including Fatalii, bird's eye, jalapeño and Carolina Reaper. Ben Maniscalco of Benito's Hot Sauce in Morrisville has committed to buying a few hundred pounds of peppers from Khelcom, he said by phone.

"I was super excited, because we already had a relationship," Maniscalco said. "He has such a good attitude, and he already knows the process step-by-step." The two spoke some Italian together, though Maniscalco, who is of Italian heritage, said Niane speaks the language much better than he does.

As of the last week of August, the pepper crop was looking strong, Niane said. Next year, the peppers will be among the beneficiaries of a new 96-by-30-foot hoop house that will extend the season on both ends.

Essentially, Makinen recounted, the neighbor said, "'What you guys are doing is beautiful. I'd love to help.' She wants us to turn her lawn into soil, too."

The original print version of this article was headlined "Backyard Bounty"