At Vermont colleges, journalism is booming - and retooling for the digital age 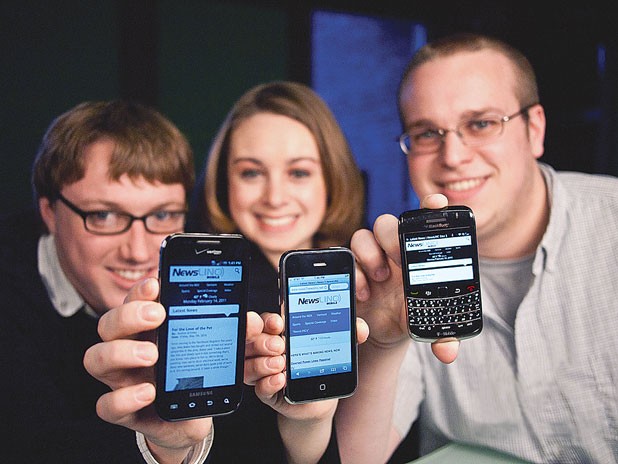 It’s deadline day at the Vermont Cynic, the University of Vermont’s student newspaper, and a crew of editors and designers is putting the finishing touches on the last issue of the fall semester. The edition features a news story on golden parachutes paid to UVM administrators, an arts piece on Irish step dancing and an op-ed commenting on a Victoria’s Secret fashion show.

The paper would normally have gone to press already, but the students are holding Page One for a late-breaking story about UVM’s infamous naked bike ride. That’s the semester-finale ritual in which hundreds of undergrads make a boob-and-ball flapping sprint across campus at midnight. Editor-in-chief Brent Summers assembled a “team” to cover the highly anticipated streak.

“We’ve got reporters and photographers who will go out at midnight and collect everything,” says Summers, a junior communications major from Barrington, R.I. “Then we’ll write, edit and lay out our front page in the early morning hours, and go to print by 3 a.m. It’s really exciting.”

Summers’ enthusiasm for putting out an old-fashioned newspaper might seem at odds with the decline of the medium over the last decade. But shrinking ad revenues, layoffs and anxiety throughout the mainstream news biz don’t appear to have deterred student journalists.

The Cynic now counts 80 students in its core staff, a fourfold increase from just a few years ago, says Summers. The entire staff can no longer fit in the same room, so each department — news, sales, design — meets individually.

With its teetering stacks of newspapers and thrift-store furnishings, the Cynic office is just how you’d picture a scrappy college newsroom. Tucked in the basement of the Dudley H. Davis Center, the space has mustard-yellow walls, a minifridge topped with jars of peanut butter and Nutella, and a simmering pot of the fuel that makes all newsrooms run: coffee.

A naked bike ride may not be the hardest-hitting news, but don’t mistake the Cynic for an unserious newspaper. In November, the weekly won the most prestigious prize in its field: a Pacemaker award, considered the Pulitzer of college journalism. Not bad for a school with no journalism program.

Summers, who took over as the paper’s top editor last month, heaps credit for the award on his predecessors, student-editors Natalie DiBlasio and Haylley Johnson, who, with the help of faculty adviser Chris Evans, helped transform the Cynic from an opinion-heavy rag into a credible news source.

The following week’s Cynic buried news of the paper’s big prize on Page 3. The cover featured the mock funeral for the “soul of UVM” staged by unionized employees over a contract impasse.

“We felt slightly uncomfortable putting ourselves on the front of the paper,” says Summers. “Plus, there was a good story that week that was a little more newsworthy.”

UVM isn’t alone in seeing a flood of aspiring journalists. Nationwide, undergraduate enrollment in journalism and mass-communication programs increased by 2 percent in 2010, according to the Annual Survey of Journalism & Mass Communication Graduates conducted by Grady College of Journalism and Mass Communication at the University of Georgia. Graduate-level enrollment went up last year, too — 13 percent for master’s programs and 6 percent at the doctoral level.

Amazingly, the survey found the job market for journalism grads is actually improving. Fifty-nine percent of 2010 graduates surveyed had secured full-time employment — 3 percent more than in the class of 2009.

With social networking and digital gadgets changing how news is produced, delivered and consumed, Vermont colleges are retooling and rebranding decades-old journalism programs to reflect the new news reality. Last year, St. Michael’s College renamed its Department of Journalism and Mass Communication the Department of Media Studies, Journalism and Digital Arts. The program has churned out a few famous journalists, notably Tim Arango, the New York Times Baghdad bureau chief featured in the 2011 documentary film Page One: Inside the New York Times.

Professor David Mindich, who chairs the department, says the name switch was meant to reflect the program’s focus not just on journalism but on multimedia production, the study of media bias and how news influences our lives.

For the department’s 130 majors, the curriculum covers wireless/mobile media, film production, digital photography, interactive web design, animation and social networking. Another sign of the times: Beginning this year, work on the St. Michael’s student newspaper, the Defender, is optional for journalism majors — and many apparently have opted out. The number of students signed up to staff the paper next semester is half of what it was last fall.

Considering the beating newspapers have taken over the last decade — and the number of jobs lost — who can blame students for taking other paths?

That may be, but the undergrads who staff the Defender are a surprisingly old-school bunch. A conversation with seven student-editors in the paper’s media lab last week suggested that the prevailing opinion on how today’s youth consumes news — or doesn’t — is a bit overstated.

“The glowing screen hurts my eyes,” says Bureau. “I was born in the wrong era, I guess.”

Like St. Michael’s, Lyndon State College has recognized the clout of new media with a name change; last year, it renamed its television-studies program the Electronic Journalism Arts Department. Associate professor Tim Lewis explains that the curriculum covers storytelling across multiple platforms, so that graduates will have “enough skills in their toolbox to be successful in whatever is going to happen next.”

To that end, LSC student-journalists write, edit and design a hyperlocal news website called NewsLINC and an online magazine called NewsINK. But their long-standing specialty is broadcasting. Since 1979, LSC students have produced a daily, half-hour, live television newscast, “News 7,” that broadcasts to 14 towns in the Northeast Kingdom on local cable systems.

For many rural Vermonters in the area, that’s the only local TV news they get. News crews from Burlington, Manchester, N.H., and Montréal rarely make it to this quiet corner of Vermont, Lewis says, so the students become the de facto reporters covering school board hearings, car accidents, and everything else that bleeds and leads.

“We treat them like pros,” says Lewis, a former TV reporter at WCAX in Burlington. “That means they get recognized at the local market, and they have to start dealing with the fact that they become a recognized public persona. Which suddenly starts them thinking, Gee whiz, I can’t be a crazy college student in public.”

News 7 has won numerous awards over the years for its reporting and landed scoops. When a cruise ship returned to Boston last year with two dead bodies on board, News 7 was the first to identify one of them because he was a former student at the college, Lewis says.

Yet the newscast retains all of the charm you’d expect from a small-town, student-produced show. The December 7 broadcast, for instance, led with a story commemorating the 70th anniversary of the attack on Pearl Harbor — with black-and-white footage of the Japanese bombing raid — before going into a super-earnest local report on government buildings that hadn’t lowered their flags to half-staff.

“There seemed to be some confusion in Lyndonville today, as some flags were not lowered to half-staff despite a notice from the governor’s office,” the student anchor read. “Around noon at the municipal building, flags were not at half-staff. The town clerk forgot that today was Remembrance Day, and then lowered the flags.

“Across the street at the post office, they were not lowered until reminded,” the anchor continued. “At this time, the flags are still not lowered at the fire department.”

The remainder of the broadcast featured stories about a cat named Stupid that keeps senior citizens company through the Pets for Life program; and an East Haven woman who gives “biodynamic cranial sacral” head massages every Tuesday at the St. Johnsbury food co-op, among other fare.

Not exactly watchdog journalism, but Lewis says the program is doing something right: Ninety-four percent of last year’s senior class had jobs upon graduation — at television stations in Waco, Texas; Grand Junction, Colo.; and elsewhere.

At Johnson State College, the eight-year-old journalism program will get a new name next year — Communications and Community Media — with concentrations in print and web community journalism, photojournalism, and public relations. At present, just 16 students major in journalism, but assistant professor Tyrone Shaw hopes the expanded program will increase that number considerably.

“This is not putting lipstick on a pig, not that the program is a pig,” assures Shaw of the name change. “We clearly need a wider scope, and we’re in a position to do that now.” The website for JSC’s student newspaper, Basement Medicine, will be revamped while the program continues to focus heavily on the fundamentals of good reporting and writing.

Basement Medicine doesn’t have the flashiest website — readers can’t leave comments or share stories on Facebook, and there’s nary a video to be seen. But Shaw says the paper has produced some solid, old-fashioned journalism, particularly given Vermont’s paltry funding for its state college system.

“I wish the mainstream press would do as much,” he says.

In November, the weekly won the most prestigious prize in its field: a Pacemaker award, considered the Pulitzer of college journalism. Not bad for a school with no journalism program.