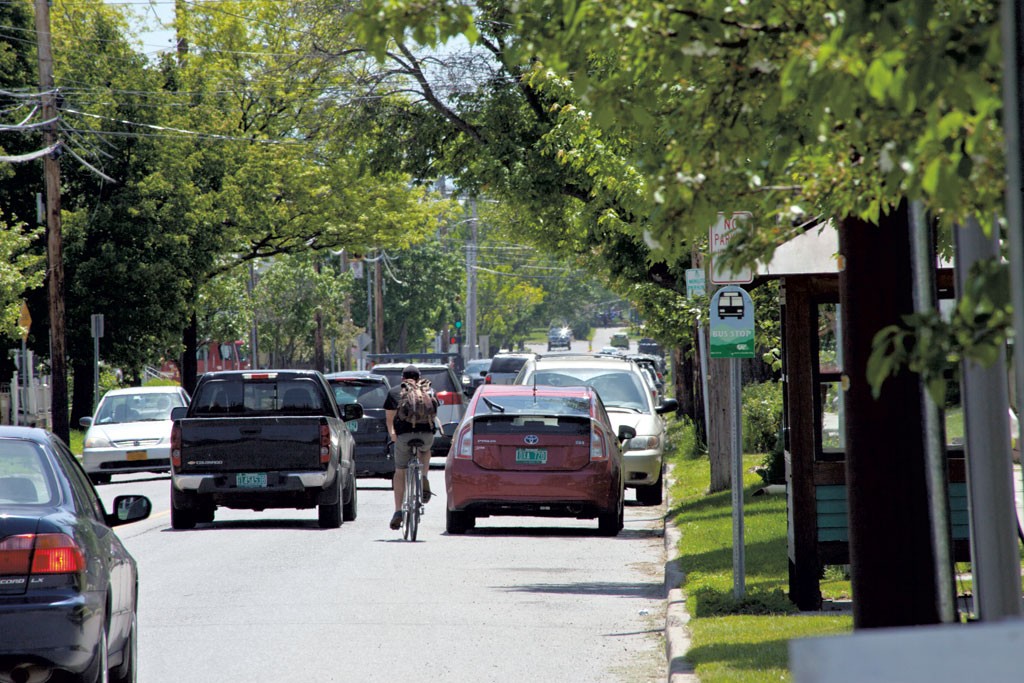 Northbound through Burlington's Old North End, North Avenue offers a convenient bike lane for cyclists. Southbound, not so much. The lane peters out around Washington Street, and cyclists are on their own, squeezed between traffic and parked cars.

In response to that and other problems, Burlington's Department of Public Works commissioned a North Avenue corridor study of the flow of cars, bicycles and pedestrians between North Street and Plattsburg Avenue.

UPDATE: Next year, the DPW will add an unbroken bike lane from Plattsburg Avenue to Washington Street.

"That's as far as we can get it in the short term," said Nicole Losch, transportation planner at Burlington's DPW. The DPW's long-term goal, Losch said, is the construction of a dedicated, continuous bike lane that would be protected from traffic by a physical barrier. That would entail the relocation of large sections of curb — a lengthy, costly process.

Losch referred to the robust citizen participation in the corridor study, and also to an overall sense that the city's "bicycle moment" may have arrived. "It seemed that every meeting had more and more people," she added. The project "just kind of snowballed."

Another instance: the success of the inaugural Open Streets BTV event in September, during which three miles of city streets were closed to motor vehicles.

Losch mentioned several upcoming DPW projects: new pedestrian signals, crosswalks, and sidewalks, and a realignment of the city's bike path. One stretch has already been rebuilt; another will soon be constructed anew.

Also coming: the first bicycle and pedestrian "master plan," which the city will start developing soon, with help from consultants, including a top-to-bottom reconsideration of nonmotorized transportation needs.

Mayor Miro Weinberger, who often walks to work, called the master plan "a game-changer." Improved biking infrastructure, he said, promotes health and appeals to those who work at the tech companies that he views as increasingly important to Burlington's economy.

The North Avenue corridor study didn't go far enough, Weinberger said, because it examined the street in isolation. "I think it'd be a very different conversation if we were talking about having a true, interconnected bike-lane system throughout the city," he said. "That's a whole new transportation system."

The original print version of this article was headlined "Time for Burlington's 'Bicycle Moment?'"