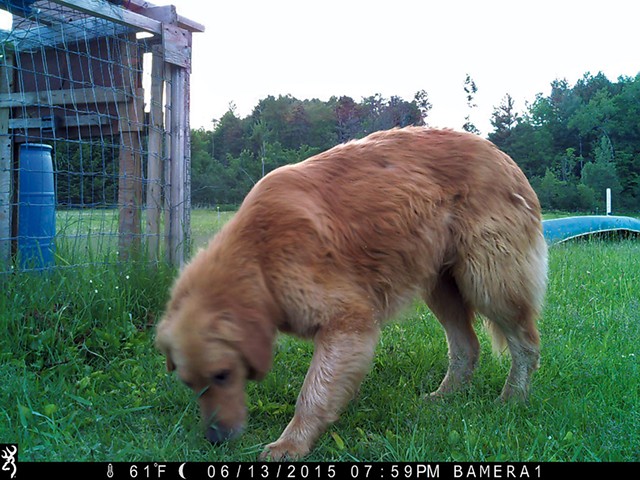 In June 2014, Morrisville resident Kirstin Campbell got into a minor car crash in Stowe. When Campbell checked on her beloved 3-year-old golden retriever, Murphy, he bolted from the backseat. He has been on the loose ever since.

"If you say his name, he runs like a jackrabbit," Campbell's grandfather, Ed Hamel, told Seven Days. "He doesn't know who he is." Some say Murphy likely associates the yelling of his name — which countless Good Samaritans have done — with the trauma of the accident. A professional dogcatcher says Murphy likely went into "survival feral dog mode" because of the trauma of the crash and has reverted to his wild self.

In the year and a half since, Murphy has been spotted numerous times along the Route 100 corridor and made frequent appearances at the Waterbury home of Associated Press reporter Wilson Ring. Ring and friends built a customized trap, baited it with food and set up video surveillance, but the dog proved elusive. The one time they managed to catch him in the trap, Murphy ate his way through the wiring and escaped.

UPDATE: Murphy sightings were few and far between over the summer, and his would-be rescuers almost gave up hope. In recent weeks, though, the runaway dog has reappeared at Ring's home, albeit no less wary of the trap.

When Ring and others have placed food outside the trap, Murphy has, at times, gobbled it up — including a batch laced with heartworm and flea medications, to keep him healthy.

The goal is to move the food deeper inside the trap, but Murphy is spooked by the slightest change in routine. "They've been slowly, slowly moving the food back," said Middlesex animal-control officer Erika Holm. "Too far in back, he won't go in at all. You have to work it in really small increments, or he won't touch it."

Murphy's appearances have also been irregular, making it difficult for his rescuers — who all have day jobs — to know when they may need to spring into action. But volunteers say they won't give up. If they can get him on a more regular feeding schedule, and slowly lure him into the trap, Murphy's story could still have a happy ending.

"I want to reunite him with his family," Holm said. "I think that's what he wants, too. He just doesn't know how to do it."