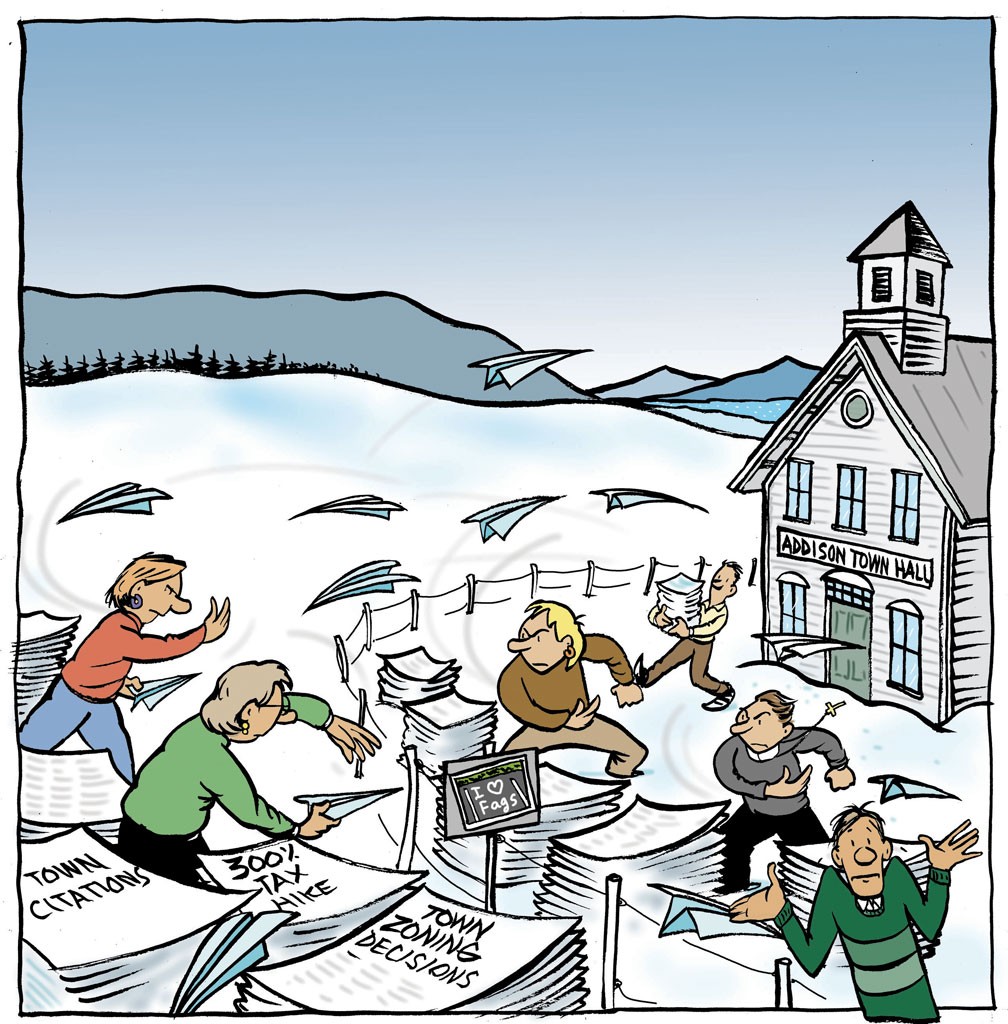 In early March, Barbara Ernst and Barbara Supeno filed a lawsuit in Addison Superior Court alleging discrimination and outright harassment on the basis of sexual orientation by town officials and neighbors. The couple, known as "the Barbaras" by many in town, alleged that selectboard chair Jeff Kauffman and others had repeatedly made prejudicial zoning decisions, retaliated against the couple for a discrimination complaint they'd filed with the Vermont Human Rights Commission and unfairly increased the valuation of their property.

The accusations attracted some local and national headlines. But when Seven Days headed to Addison to scope out the scene, the story that emerged was far more complicated. Town officials denied any harassment or prejudice. Town records showed long-standing conflicts over development and zoning decisions on Fisher Point Road, where Ernst and Supeno lived amid several modest lakeside camps.

The dispute, some officials and residents said, wasn't about bias, but about the accumulation of ill will between neighbors of different classes and backgrounds who were bickering over fences, rights of way, trespassing and efforts to improve properties.

UPDATE: Court documents are flying back and forth in the case, which is now before the Vermont District Court. The defendants deny virtually all of the Barbaras' charges, and claim lack of knowledge or sufficient information about others.

The defendants also filed multiple motions to dismiss — one of which, pertaining to a small section of the overall lawsuit, was granted. Early on, selectboard chair Kauffmann and his wife, Carol, even requested their own "compensatory damages," alleging that Ernst and Supeno "scoured the internet to find information about us, and caused a negative stereotype within the media, our community and school district."

The case is tied up in an appeals court, waiting for a ruling on one motion. Ernst and Supeno's lawyer, David Bond, predicts a drawn-out fight; he expects the case won't be argued until 2016.

In the meantime, there's still drama on Fisher Point Road, where Ernst and Supeno live. Last spring, Ernst and Supeno lodged a number of complaints with the Vermont Agency of Natural Resources alleging wastewater and water violations at a neighbor's property. Gary Kessler, the director of the compliance and enforcement division at the Vermont Department of Environmental Conservation, responded, saying the complaint had been investigated, no violations were found and the case was closed. In turn, Ernst and Supeno emailed other state officials asking them to stop "Gary Kessler and the DEC officials you work with from continuing to retaliate against us and harass us for reporting these failed systems."

"We'll find something if there's something to find," Kessler told Seven Days. "There really was no violation. It was just a false alarm, and a five-alarm-fire false alarm."

Ernst and Supeno originally turned away the DEC employees charged with investigating their neighbors' claims, threatening to call the police, according to an affidavit later filed by one of the DEC employees. The investigators returned in September, accompanied by two state troopers, and found evidence of three water and wastewater violations, according to an emergency order issued by the environmental division of Vermont's superior court.

The court ordered the women to cease using the town water supply until the violations could be fixed and to stop renting their second home as anything but a one-bedroom cottage. Kessler said Ernst and Supeno applied earlier this month for the necessary permits for the property.