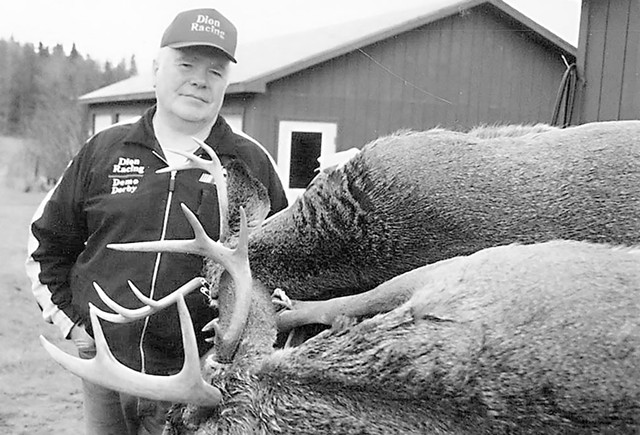 Wayne Dion of Irasburg may be one of the most prolific deer poachers in Vermont, according to the Fish & Wildlife officials who arrested him. While searching his home in late 2014, game wardens found more than 100 deer mounts, seven freezers full of apples and corn, which can be used for animal bait, and a shooting port in the bedroom that opened onto a field illuminated by five spotlights.

Deer trails showed that animals were coming from all over to visit the property, while hunters elsewhere in Irasburg were struggling to find wild game, wardens observed. They charged Wayne Dion with nine counts of illegally baiting and shooting animals; his wife, Jennie, got slapped with one count of possessing an illegal deer.

"It hurts my feelings," Dion said of the allegations, which he insisted are false.

UPDATE: Most poaching cases in Vermont resolve in quick plea deals. But the Dion one is shaping up to be an only-in-the-Northeast Kingdom legal donnybrook — and, as of press time, appeared to be headed for trial in early 2016.

Much of the case rests on a deer carcass that wardens found in the couple's basement. Senior Warden David Gregory measured the temperature of the dead deer's thigh and determined the animal died eight to 10 hours before the start of the 2014 hunting season. Such a premature kill would constitute a violation of Vermont law.

Defense attorneys have challenged the warden's method of ascertaining time of death, calling it junk science.

Prosecutors avoided potential disaster when Judge Howard VanBenthuysen denied a request from the defense to discard that evidence. But he forbade Gregory from testifying about measurements taken in similar cases for the sake of comparison and encouraged defense attorneys to question the validity of the method during a "rigorous cross-examination."

The jury's decision could affect how wardens conduct future poaching investigations in Vermont.