Update: A Legal Quandary for Burlington and Planned Parenthood 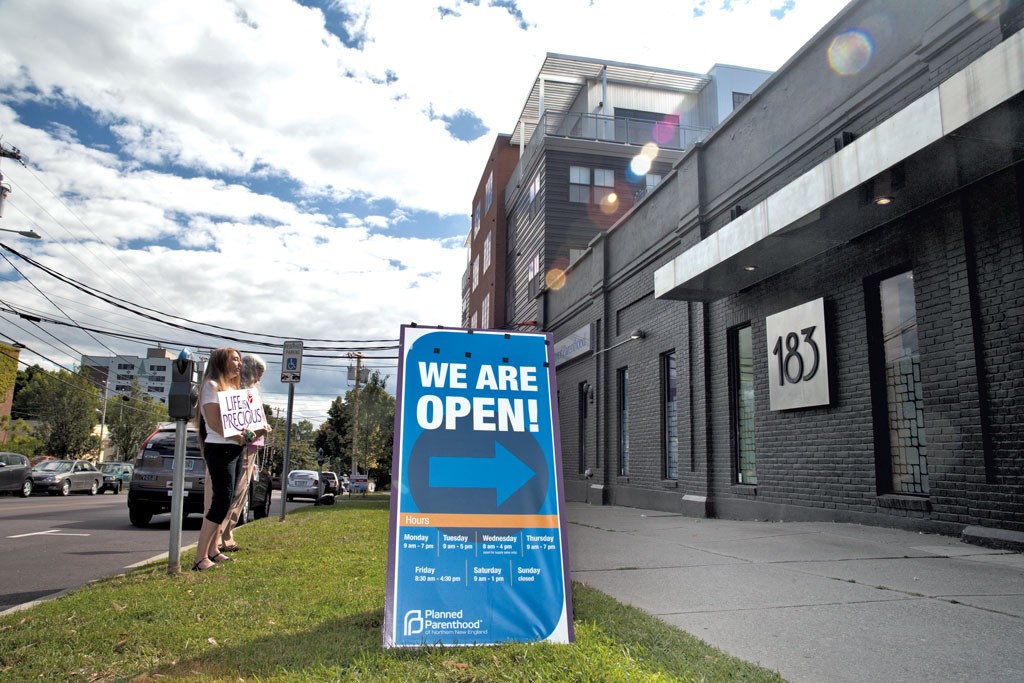 In late June, the U.S. Supreme Court struck down the buffer zone that kept protesters away from abortion clinics in Massachusetts. By ruling that no-protest areas infringed on free speech, the justices effectively eliminated the 35-foot one that used to exist around Burlington's Planned Parenthood.

In response, the Queen City's clan of pro-lifers crossed St. Paul Street, bringing their message to within roughly 15 feet of the health clinic's front door.

More protesters showed up, and patients began feeling intimidated and harassed, according to Jill Krowinski, the head of the local Planned Parenthood chapter. The protesters — who call themselves sidewalk counselors and usually pray outside the clinic two days a week — maintained they've never been anything but peaceful.

The Burlington City Council unanimously pledged to find an alternative to the buffer. Planned Parenthood pushed for a "bubble zone" that would prevent protesters from approaching within eight feet of patients unless they obtained consent. But city attorney Eileen Blackwood said the Supreme Court had given mixed signals about the constitutionality of that approach, and protesters said they'd likely test it in court.

At the same time, the city was trying to resolve a legal battle from 2012, when six pro-life protesters sued Burlington in federal court over the buffer zone. The women lost, but the case was under appeal at the time of the Supreme Court ruling, which effectively deflated the city's argument. One sticking point remained: who would pay the plaintiffs' legal fees.

UPDATE: The city and the plaintiffs are still haggling over who will pay the latter's attorney fees. Burlington recently filed a motion asking the court to decide, according to Blackwood.

In late October, the council set aside the bubble zone proposal in favor of a more cautious approach: Councilors banned harassment outside of reproductive health clinics. They authorized police officers to keep protesters at least 25 feet away from clinics for as long as 12 hours and to levy heavy fines — up to $800 — on offenders as punishment.

"While we are disappointed that we couldn't have something stronger," Krowinski said, "it was something out of the control of the mayor and city council."

Councilor Chip Mason explained, "What we did try to do was sort of craft the middle line." If it didn't work, councilors promised they would go back to the drawing board.

If you assumed harassment was already illegal, you're right. Some of the behavior described in the ordinance would likely fall under the category of disorderly conduct, Blackwood said, but, she pointed out, the revised ordinance clarifies which types of behavior aren't permitted and adds specific penalties for violations.

What counts as harassment? Approaching in a threatening manner, using abusive language or violent gestures, touching someone without their consent, or continuously attempting to engage with someone who's made it clear they're not interested.

More importantly, is the ban on these behaviors, which took effect November 19, working?

Krowinski said it's too soon to say, but Planned Parenthood is monitoring the situation closely.

"So far there have been no problems whatsoever," said Agnes Clift, one of the regular protesters and a plaintiff in the unresolved lawsuit. "We've been able to continue our activities as we've always done in the past."

Between two and 15 protesters still show up twice a week, according to Krowinski.

And, as women on both sides pointed out: The police haven't been called to St. Paul Street since the law passed.