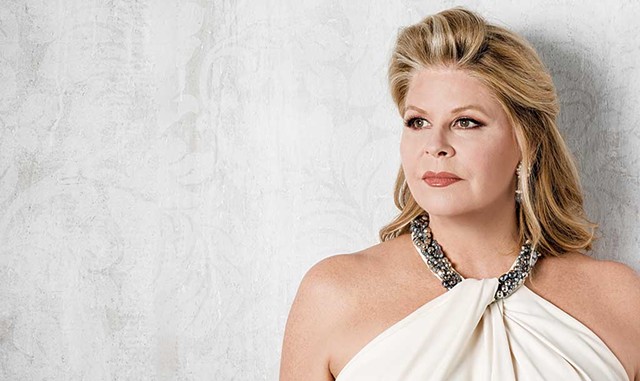 Arts calendars are filling up again with live performances, and each seems like a gift in these pandemic times. In the opinion of this writer, certain classical concerts on the schedule shouldn't be missed — because they offer not just the joy of hearing live music but also opportunities to support the musicians and singers who have had so little work over the past 19 months.

With headliners ranging from pillars of Vermont's music scene to national stars, here are five concerts to put on your calendar.

Capital City Concerts hasn't held a live concert since March 7, 2020, days before the lockdown. Now flutist Karen Kevra's Montpelier-based series is back with a message of "healing, celebration, joy and communion — coming together again after being apart for so long," Kevra said during a phone call.

That's why she programmed Ludwig van Beethoven's String Quartet No. 15 in A minor, op. 132 for the series' return this weekend, to be played by the acclaimed Borromeo String Quartet in Montpelier and Burlington. Beethoven wrote the piece in thanks for surviving a near-fatal illness in 1825, two years before his death; he titled the third movement "Holy Song of Thanks From a Convalescent to the Divinity."

"This music is a kind of a soundscape, and there's just nothing like it — really, in all of music," Borromeo violinist Nicholas Kitchen opines in the latest episode of Kevra's "Muse Mentors" podcast. (In the absence of performances, Kevra taped 16 episodes of the podcast over the past year and a half; she will release episodes monthly going forward.)

Rounding out the program are "Swing Low, Sweet Chariot," a string quartet by 80-year-old Black American composer Adolphus Hailstork, whose work was recently performed at President Joe Biden's inauguration; and a minuet from Christoph Willibald Gluck's Orpheus and Eurydice featuring Kevra on flute.

When has mezzo-soprano powerhouse and Metropolitan Opera regular Susan Graham ever performed in Vermont? Never, per this writer's research. Yet that's where she'll be on October 29, at Middlebury College's Mahaney Arts Center, singing a brand-new work by Richard Danielpour. Vermonters may recognize his name from duets he composed for cellist Sharon Robinson and her husband, violinist Jaime Laredo, while Laredo was the Vermont Symphony Orchestra's music director.

Graham and the string sextet Music From Copland House will perform Danielpour's A Standing Witness, a song cycle based on 13 poems that former U.S. poet laureate Rita Dove wrote at the composer's request. Voiced by a "standing witness," the poems explore signal events and figures of the last 50 years in America, from the assassination of Martin Luther King Jr. in 1968 to 9/11. A final song reveals the identity of the witness. (Clue: It's a statue — an interesting challenge for Graham's compelling acting skills.)

Danielpour's song cycle was co-commissioned by the Middlebury College Performing Arts Series and the other 10 members of Music Accord, a consortium that commissions new chamber music and includes the likes of the John F. Kennedy Center for the Performing Arts and the Chamber Music Society of Lincoln Center. The Middlebury concert will be the New England premiere of A Standing Witness, after an initial performance in Chicago.

Allison Coyne Carroll, the Middlebury series' director, petitioned for the series to join the consortium in 2019 before the series' 100th anniversary season that year. Reached during a joint phone call with Coyne Carroll, Mahaney Arts Center director Liza Sacheli said, "We're trying to ensure the health of our musical future [so that] our audiences have new work to experience over the next hundred years."

Graham is not the only acclaimed singer whose itinerary includes Vermont. Dawn Upshaw, a soprano who was the first vocal artist to win a MacArthur Foundation "genius" grant, in 2007, will appear at Dartmouth College's Hopkins Center for the Arts on January 19 with the Brentano String Quartet in a fascinating program.

In the first half, Upshaw will sing selections from Baroque opera, including the final lament by Dido from Henry Purcell's Dido and Aeneas. In the second half, she'll appear as a new, rewritten Dido in Dido Reimagined, a monodrama by Pulitzer Prize-winning composer Melinda Wagner and librettist Stephanie Fleischmann. The work was co-commissioned by the Hop.

In a YouTube video about the genesis of the project, Fleischmann says that she and Wagner wondered, "What does it mean [today] to be broken by love when you're an incredibly strong woman?" These days, the pair reasoned, opera heroines don't have to die — in the case of Purcell's Dido, by suicide — so they devised a contemporary parallel.

It's no surprise that Upshaw, with her famously expressive soprano voice, mentored Vermont's own Mary Bonhag, cofounder of Scrag Mountain Music and a skilled soprano with a knack for expressivity. Bonhag studied with Upshaw from 2008 to 2010 in the graduate vocal arts program that Upshaw founded at Bard College, and for two seasons as a fellow at Tanglewood Music Center, where Upshaw is head of the Vocal Arts Program.

"[Upshaw] has this deep conviction about the music and the words that she portrays to the audience," Bonhag told Seven Days. "She becomes the piece when she performs. As an audience member, I can't help but become completely drawn in."

Finally, two notable Vermont pianists have performances coming up. On Sunday, October 31, Paul Orgel of Shelburne will reemerge from 19 months of online-only performances filmed at home for a solo program at the newly renovated University of Vermont Recital Hall; he is an affiliate artist at UVM. The hourlong program includes sonatas by Domenico Scarlatti; selections from Pyotr Ilyich Tchaikovsky's The Seasons; Frédéric Chopin's Nocturne in B, op. 9, No. 3; two short works by Felix Mendelssohn; and Alexander Scriabin's 24 Preludes, op. 11.

Orgel has focused his pandemic time on learning Johann Sebastian Bach's The Well-Tempered Clavier: Book 2, as well as Chopin's nocturnes and Scriabin's preludes, he wrote in an email. The latter, he pointed out, were inspired by Chopin's preludes, which in turn were inspired by The Well-Tempered Clavier. All that practice has been for one goal, he said: "The experience of sharing live music with audiences in a hall."

In the Middlebury College Performing Arts Series' final concert of the semester, pianist Diana Fanning will join the Schumann Quartett on November 11 for Robert Schumann's Quintet in E-flat Major. Fanning has taught at Middlebury College for nearly four decades and has regularly traveled abroad to perform, including with the Takács Quartet and Alexander String Quartet.

Based in Germany, the young Schumann Quartett — named for its three brothers Schumann, unrelated to Robert — recently completed a three-year residency with the Chamber Music Society of Lincoln Center. The quartet will provide the first half of the program: Mendelssohn's Quartet in A Minor and Maurice Ravel's Quartet in F Major. Schumann's quintet, its exuberance sandwiching a funeral march, will make for a resonant finish.

What Kevra said of her Capital City Concerts program is equally true of all these musicians' programs: "When you think of all the suffering we've been through, the people we've lost and the way life has changed, this music fits right in."

The original print version of this article was headlined "Welcome Reprise"