Up in Arms: Bill Would Let Cops Take Guns in Domestic Violence Cases 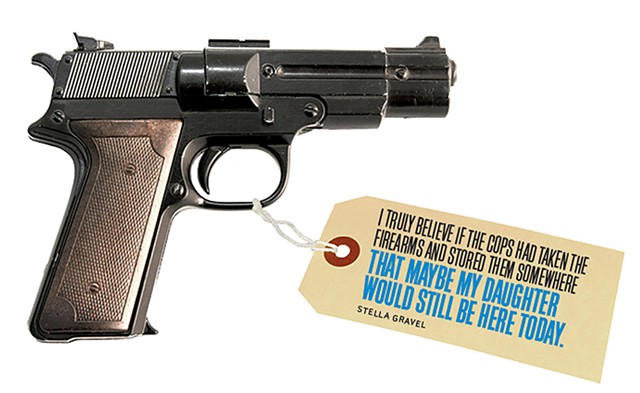 Stella Gravel sat before the House Judiciary Committee earlier this month and told her daughter's tragic story: Early one morning in August 2013, Rhonda Gray's estranged husband, Troy, shot and killed her in her Fairlee home. He then killed himself with the same rifle.

Troy Gray had been facing a court date to answer to his second domestic violence charge. "He told everybody they would never see him in court," Gravel, an East Hardwick resident, told the House committee. "I truly believe if the cops had taken the firearms and stored them somewhere that maybe my daughter would still be here today."

Moved by such stories, Rep. Maxine Grad (D-Moretown) set out this year to ensure that weapons are removed from homes during domestic violence arrests. The logic seemed unassailable to Grad. As chair of the House Judiciary Committee, she made such legislation a personal priority.

"My goal is to provide victims with protection during that immediate and most dangerous time when the violence has escalated," she said.

Grad quickly ran into resistance, however. As other Vermont lawmakers have discovered, any proposed limits on gun ownership provoke determined opposition from gun-rights and sportsmen's groups. They have successfully halted virtually all efforts to change Vermont's gun laws, seeing them as an erosion of their constitutional rights.

By last week, when Grad's committee voted 7-4 to take action, she had agreed to weaken and more narrowly tailor her legislation.

The full House started debating the bill this Tuesday. A preliminary vote was relatively close, with members supporting it 78-67.

"This is just the latest gun grab, is what it is," said Bob DePino, vice president of Gun Owners of Vermont.

DePino was among half a dozen gun-rights activists who hunkered down in Grad's committee last week. They had waited more than two hours during the March 14 snowstorm for the committee to resume discussion. DePino said he wasn't worried about the snowy 100-mile trip home to Windham County.

His organization, meanwhile, mobilized members to call legislators and ask them to defeat the bill.

Between hearings, Grad bemoaned the standoff that quickly develops over any legislation that can be perceived as interfering with the Second Amendment right to bear arms.

"It's a difficult conversation. I've been getting some disturbing emails and Facebook posts," Grad said of the vehement response from gun-rights activists. But, she argued, the bill is the best way to address the threat hanging over domestic violence victims: "Unfortunately, firearms are used in these situations."

That's the point prevention advocates are trying to hammer home — that guns and domestic violence are a deadly mix.

"We cannot impress upon you enough the strong correlation between domestic violence, homicides and firearms in Vermont," Auburn Watersong, associate policy director for the Vermont Network Against Domestic & Sexual Violence, told Grad's committee. "That is why we believe that it is imperative to require the removal of firearms at the scene of a domestic violence offense."

"When a gun is present in a domestic violence situation, it increases the risk of homicide for women by 500 percent," Watersong said, citing a 2003 national study.

Six of the 16 homicides reported by the Vermont Chief Medical Examiner's Office in 2015 were domestic violence-related, said Carolyn Hanson, an assistant attorney general who focuses on domestic violence cases and supports the legislation. All six were committed with a firearm, she said.

Gun Owners of Vermont disputes those stats as not in line with Federal Bureau of Investigation data, which indicate that there were 10 homicides in 2015.

Opponents turned to broader statistics to bolster their argument that Vermont is a safe state that doesn't need new gun laws. "In 2004 and 2009, there were zero total firearm fatalities," said Eddie Cutler, president of Gun Owners of Vermont. "Show me another state that has zero homicides by firearm over an entire year."

Prevention advocates argue that gun seizure laws work. Eighteen states permit police to remove firearms from a domestic violence scene where there is probable cause for an arrest, Watersong told the committee. Thirteen of those states, including live-free-or-die New Hampshire, require police to remove guns.

Vergennes Police Chief George Merkel, president of the Vermont Police Association, said he thinks such a law in Vermont would help, as long as it's clearly written and doesn't leave officers in ambiguous situations.

Police in New Hampshire support the law. David Goldstein, police chief in Franklin, N.H., said it works to diffuse volatile domestic violence scenes, though the gun seizures are not without tension.

"It would be silly to think this one thing would solve the problem, with domestic violence being as complex as it is," Goldstein said.

New Hampshire law requires police to remove guns that are in plain sight during a domestic violence arrest, but Goldstein said police quickly turn to a judge to make a longer-term ruling about a suspect's guns.

The law does create more paperwork and forces police to store guns, Goldstein said. "I have people coming to the door all the time saying, 'I want my guns back,'" he said.

Vermont gun owners have no plans to relinquish their state's reputation for gun-friendly laws.

Evan Hughes, vice president of the Vermont Federation of Sportsmen's Clubs, contended that the real issue is enforcement of existing domestic violence laws. If someone poses a threat while their case is pending, "That begs the question: Why is he out on pretrial release?" he said.

As originally proposed, Grad's legislation would have required police to confiscate any "dangerous weapons" within view when arresting someone for domestic violence, for a five-day period. Under current law, weapons may be confiscated as evidence if used in a crime, but other weapons are off-limits without a search warrant.

Cutler took aim at the definition of "dangerous weapons." Police would have to remove not just guns, he said in written testimony, but "every kitchen knife, ax, hammer, scissors, trophy, chair, golf club, fork, pencil, chain, tire iron, can of gasoline, garden tool, family car, even the bed sheets and everything else that can possibly be used as a deadly weapon."

Grad conceded the point. The bill her committee voted out last week deleted the reference to deadly weapons and focused only on firearms.

Gun-rights advocates quickly moved on to other concerns, including the requirement that police seize firearms, removing an officer's discretion.

Though that is how New Hampshire's law is worded, Grad's committee also gave ground there. Members altered the bill to say that police "may" remove firearms "if the removal is necessary for the protection of the officer or any other person."

Hanson said that change works. Having the option will mean that police would be trained to consider confiscating weapons. "The more there are things we can do that don't depend on the victim saying, 'Please do this,' the better," she said.

However, a 2009 study by the Johns Hopkins Center for Gun Policy and Research advised that laws that say police "shall" remove guns are preferable to those that say police "may," because the requirement removes ambiguity.

Other questions proved tougher for the House Judiciary Committee. Members struggled with what police should do with a seized gun after the five-day period that the bill establishes. Should it go back to the accused, to a family member or to someone else?

"This is a tough, tough bill. The more we're trying to get it right, the messier it is," said Rep. Kiah Morris (D-Bennington), a committee member who declared herself a strong supporter of the proposal.

"What do you suggest?" Grad asked her committee.

"That we don't take people's guns," replied Rep. Janssen Willhoit (R-St. Johnsbury), one of the committee's four Republicans, who all voted against the bill. "This is way more complicated, regardless of which side you're on, than people realize."

The committee finally decided that police should return a gun to "the person from whom it was removed or any other person whom the agency reasonably believes is an owner of the firearm," with exceptions spelled out in court orders and for offenders ineligible to possess guns.

"Being arrested for something and being convicted of something are two very different things," Darin Goens, Vermont state liaison for the National Rifle Association, told the committee. To seize guns belonging to someone who is charged with but not convicted of a crime is a constitutional violation, he argued.

Assistant Attorney General John Treadwell and Hanson told Grad's committee that the bill is constitutionally defensible, though they acknowledged it's likely to draw a legal challenge. Hanson said they could find no court decisions directly on point.

Goens said court challenges of such laws are uncommon. "You have to be accused of abuse and have the resources to fight it," he said. "There hasn't been a lot of litigation on this."

Rep. Chip Conquest (D-Newbury), committee vice chair and a gun owner, argued that the bill doesn't infringe on rights. "I don't want anybody taking my guns, and I'm not worried about this doing that — because I'm not going to hit my wife," Conquest said.

Questions persisted, however, as the bill headed to the House floor. Rep. Patrick Brennan (R-Colchester) said seizing firearms before a conviction "flies in the face" of constitutional rights.

Grad's legislation faces a difficult path in the Senate. "I have concerns about the bill," said Senate Judiciary Committee chair Dick Sears (D-Bennington). "Particularly when it's people that are cited, when it's a he-said, she-said situation."

And yet that time period — between arrest and court appearance — is often the most volatile, victims' advocates said.

"The idea is, if you can just get those guns out of the home, you can get the victim some breathing room," Hanson said.

Gravel will never know if a five-day gun seizure would have helped her daughter, whose husband had been arrested for domestic assault three weeks before he killed her. But she believes the bill could save lives.

"My main issue is that there's some way to keep the guns out of his hands," Gravel said. "I don't want anybody else to go through that."