Up End This Creates Tiny, Sustainable Rooms on Wheels

Early this month, a U-Haul truck pulling a small, rectangular, flat-roofed building on a homemade trailer parked in front of the stunning lake view at Shelburne Farms. It was a perfect spot for a photo shoot, even if rain clouds threatened.

The structure's designer and chief builder, Michael Zebrowski, and a helper jumped out and started fitting the module with a deck, pulling pre-sized components from the truck. Another helper furnished the interior with a rug, two chairs, a Japanese-style box shelving unit, an electric kettle and a few works of art.

A passerby stopped to ask, "What are you building?"

"Tiny modules," Zebrowski answered, smiling broadly. The yellow trucker hat he wore bore the logo of his new company, Up End This.

Zebrowski calls these structures Satellites. The company's website describes them as "modular, nomadic, relocatable architectural products." Up End This offers five different models, from the Escape Pod, which has an 8-by-6-foot floor plan, to the Habitation Module, which is a streamlined version of a tiny house.

The one parked at Shelburne Farms was the Orbiter, which measures 8 by 10 feet. It represents Zebrowski's first Satellite sale. He is, in fact, launching his company during a pandemic.

That may seem risky, but the architecture-trained designer is gambling that the necessity of social distancing actually creates more uses for his products. Need a Zoom room away from the kids? A backyard office that can turn mobile for telecommuting while you travel? A portable barbershop, or a micro café? How about an Airbnb suite for extra income?

"It's really meant to be a blank slate," Zebrowski said during an earlier phone call from his Johnson home. While he was building the Orbiter, he added, his 7- and 5-year-old children suggested another use: "Daddy, can this be our play space?"

The name of Zebrowski's company, which reverses the ubiquitous "This End Up" label on shipping boxes, is oddly in keeping with these upended pandemic times. In fact, the designer conceived of his new enterprise back in 2017 while preoccupied with another disaster: climate change.

"The thought was, How are we going to live in a place that feels like it's been turned upside down?" he explained.

Satellites are designed to address concerns about sustainability. While the market is flooded with mod-looking prefab sheds that can serve as backyard offices or yoga studios, most require permanent installation. Up End This products can come three ways: permanently mounted on a wheeled trailer bed; purchased with a trailer that can come on or off; or installed using four corner stilts. Because of its space-frame construction, a Satellite's walls can easily be unbolted and replaced with, for example, a wall of windows.

The structures' light environmental footprint is evident in other ways. Interior heat comes from passive solar, through windows made not from glass but from a type of corrugated plastic typically used in greenhouses. (Buyers can also opt for a radiant floor.) Ventilation happens naturally, with windows positioned to pull in cool air at floor level and let out hot air above.

Built-in electrical wiring can be powered with solar panels (an add-on) or an extension cord run from a main house. The Habitation Module will have a composting toilet. All models facilitate rooftop water collection. 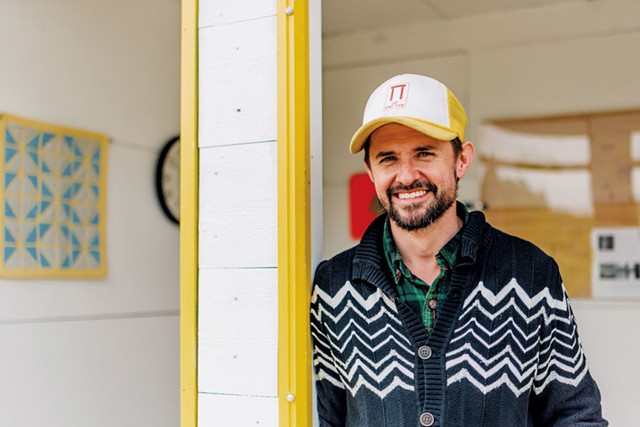 Zebrowski is keeping his modules affordable by taking a page from the auto industry. Satellite base models for each module range from $6,200 to $14,400; a fully loaded Habitation Module costs $51,000. All can be customized with the company's easily installed "crates" — office, kitchen, storage and other premade add-on units.

Kim Marie Glynn is Up End This' first customer. She showed up at Shelburne Farms to see the Orbiter that would be placed on her property later that day.

"It's beautiful!" she exclaimed.

Glynn lives in a cooperative mobile-home park in Shelburne in a tiny house she purchased three years ago. Shelburne zoning requires that her Satellite be trailer-mounted. She plans to use it as an artist's studio: She makes collages and other art from recycled materials, which can pile up. For winter use, Glynn asked Zebrowski to insulate the walls and ceiling; she'll also install a stick-burning stove called a Cubic Mini.

Looking at the white-painted box with yellow-framed windows and door, Glynn explained her attraction to Zebrowski's product. First, the Orbiter is made almost entirely from recycled materials, which give it a distinctly DIY look that fits her lifestyle.

"I love that it collects rainwater," she said, pointing to a spout emerging from one side of the roof. With that she can water her garden; she intends to invest in a green-cone composter next.

"[Zebrowski] has a similar philosophy of life that I want to support — people doing things for the Earth," Glynn said.

Zebrowski, who earned a master's in architecture from the Cranbrook Academy of Art in Michigan, moved to Vermont in 2014 to teach sculpture and 3D art at what was then called Johnson State College. He was soon showing his own architecturally based artwork in exhibitions including "Exposed," Stowe's annual outdoor sculpture show, and "Of Land and Local" at Shelburne Farms. One example: "Observatory," a long, narrow, roofless structure installed on Lone Tree Hill at Shelburne Farms, framed an idyllic slice of the view across Lake Champlain to the Adirondack Mountains.

Zebrowski said his business is driven by the same goal as his public art: environmental awareness. "I was always interested in building things that allowed people to see where and when they were," he commented.

He chose yellow as his company's signature color partly to highlight that awareness. "It comes out of caution about how you use resources," Zebrowski said. "But it's also just joyful — the idea of a bright, sunny space."

That outlook unites the Up End This team, which includes five of Zebrowski's former students. One is Lily Johnson, the company's media manager, who works remotely from Portland, Ore.

"We all value the same thing — sustainability," said Johnson, who graduated from Johnson State in 2017. She interned at Zebrowski's now-defunct Center for Public Art and served as a gallerist when he ran the college's Julian Scott Memorial Gallery.

"I feel like Vermont is one of those states that's really thinking green," Johnson declared. "[It has] the whole DIY, living-off-grid mentality."

Part of Johnson's job is to spread narratives on social media about how one might use a Satellite. 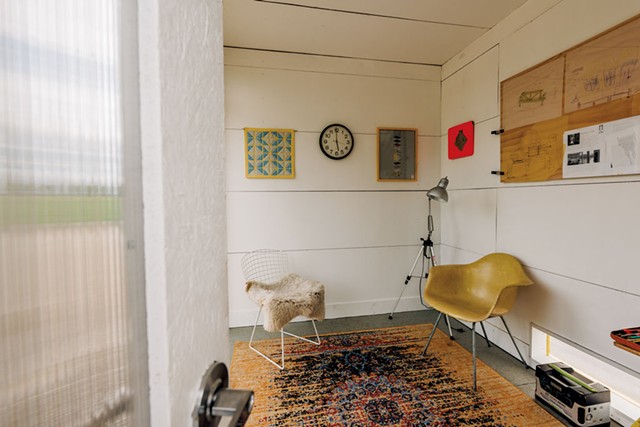 "This doesn't have to be a house," she pointed out. "If you're a musician and you don't have space or money to renovate your basement, you just put your music studio in a Satellite."

For Burlington residents, such scenarios became more attainable in mid-February 2020, when the city instituted an ordinance change making it easier to install an accessory dwelling unit. The changes streamlined the permitting process for adding an ADU to a property, eliminated the requirement for a parking space and increased allowed square footage. (However, fire code requires that ADUs have a sprinkler system if they are more than 50 feet from the street.)

That was "a real game changer," according to Michael Metz, chair of the development committee for Generator maker space in Burlington.

Metz helped select Zebrowski for the 2020 cohort of JumpStart, an entrepreneurial boot camp for budding businesses centered on a physical prototype. A collaboration of Generator and the Lake Champlain Regional Chamber of Commerce, the program is designed to make winners competitive for the chamber's more advanced LaunchVT award. Zebrowski used his three-month residency at Generator to create the Orbiter prototype, which he then modified for Glynn.

Now that it's easier to install an ADU, Metz pointed out, Satellites make a lot of sense. "It means you can buy one of these and rent it out. [Or] it can be used as an additional housing unit, and we have a bit of a problem with housing costs [in Burlington]. And, personally, I think remote working is here to stay."

Zebrowski acknowledged the challenge of starting a business in 2020. "But I really do believe that we're offering something that's about this moment in our time," he said. "And, might we be one of the companies that actually shows growth?"

The original print version of this article was headlined "Mod Pods | Johnson-based Up End This creates tiny, portable and sustainable Satellites"