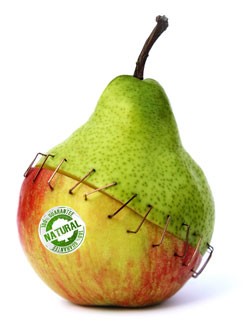 The label on your corn oil or cereal or tortilla chips reads “pure, 100 percent natural” or “all natural” — but what does that mean?

According to federal rules, not much. There may be traces of genetically modified soy, corn, potatoes or other crops inside. The word “natural” conveys only that a food contains no added color, artificial flavors or additives. Genetically modified organisms, or GMOs, get a free pass. And, since the word “natural” still has a powerful pull for consumers, its use and abuse aren’t limited to corporate giants such as ConAgra. Food items from companies as seemingly crunchy as Kashi (owned by Kellogg’s) and Barbara’s Bakery have also been fingered for harboring GMOs.

The state of Vermont has more stringent rules on misbranding than the federal ones, and those are at the heart of the bold bill H.722, aka the Vermont Right to Know Genetically Engineered Food Act. Introduced in February by Rep. Kate Webb (D-Shelburne), it would require all foods that contain GMOs to say so on their packages.

This is not the first time a state has sought to label foods containing GMOs. With 93 percent of Americans supporting such labels, according to an ABC News poll, 17 states are considering bills to do just that. Supporters in California are gathering hundreds of thousands of signatures to bring the measure to a ballot this fall, and a national campaign called Just Label It aims to collect a million comments to send to the Food and Drug Administration urging it to label GMOs.

This groundswell of support feels decidedly retro, at least in the global context. The European Union began requiring GMO labeling in 2004. Fifty nations do the same, and the United States and Canada are the only developed countries that don’t regulate such identification.

“It’s just one more example of how we’re really behind the curve of where the world is going,” says Andrea Stander, director of Rural Vermont, one of the organizations that cowrote Vermont’s bill, along with the Northeast Organic Farming Association and the Vermont Public Interest Research Group. “So many people are excited about this, because we can draw a line in the sand and say, ‘Enough. We want to know,’” she adds.

According to various estimates, a staggering 60 to 80 percent of all foods on grocery shelves contain genetically engineered components, yet the FDA has shied away from requiring GMO labels. The feds claim they hinder free trade and that no research definitively proves GMOs harm human health.

Despite this opposition, Vermont’s strong stance on accurate labeling could carry H.722 into state law. “As this bill is based on Vermont’s misbranding statutes, it is more likely to survive a challenge in federal court,” says David Rogers, NOFA’s policy adviser. “In the past, labeling bills have been challenged because they might violate the commercial clause of the Constitution. Misbranding statutes are a purview of the states.”

Rogers theorizes that no state has yet successfully passed a GMO labeling law because of the enormous sway of food-industry giants. To counter their clout, Vermont’s 16-page bill draws strength from detailed legalese — it goes as far as defining enzymes, organisms, genetic engineering and “in vitro nucleic acid techniques.”

“Someone has to lead, and Vermont has led before in a number of areas,” says Rogers.

The bill has broad support among food producers statewide, including Elysabethe James, who’s been raising heritage turkeys at her Bryn Meadow Farm in Charlotte for 12 years. In a sector dominated by selectively bred animals, James has experienced firsthand the difference between giant modern turkeys and older heritage breeds; a few years ago, she tried some of what she calls the “white factory turkeys” on her farm.

“They have huge breasts, absolutely mammoth — but they had no taste. They had been altered and inbred to the point you couldn’t recognize the taste. They had trouble walking, they’re incapable of breeding, and they can’t fly,” James recalls. “There’s been a huge push from Monsanto and company to allow for these genetically modified animals, and so far not a lot of good has come from it.”

The experience cemented James’ commitment to older, albeit smaller, heritage breeds, and she’s hopeful that labeling will entice consumers toward foods with more integrity, even at greater cost. “People can see the value in eating something natural,” James says — they just need to be able to trust the word.

After the EU changed its labeling law in 2004, many consumers stopped buying foods with GMOs, forcing companies to abandon those crops, as well. Here on American soil, the prospect that ConAgra or Frito-Lay might need to relabel all its products to sell them in a tiny state seems almost surreal. Stander points out that, if the bill passes, producers will have just until 2014 to comply.

“If the bill passes into law, we are almost guaranteed a lawsuit from the big food businesses, declaring the new law violates the FDA nutrition-labeling law,” says Rep. Webb. “We believe it does not.”

Stander says she’s been surprised by the intense support of Vermonters in this effort. “In the kinds of issues we work on, there is always a certain amount of controversy,” she says. “[The bill] just seems to be pretty strongly in favor of the very simple, basic right to know.”

“The ag committee in our state has the opportunity to be really bold and respond to the overwhelming public support for this and move this bill forward. That’s all they have to do — move it forward,” says Stander. “We have people lined up to testify who have expertise. We just want the chance to do it.”