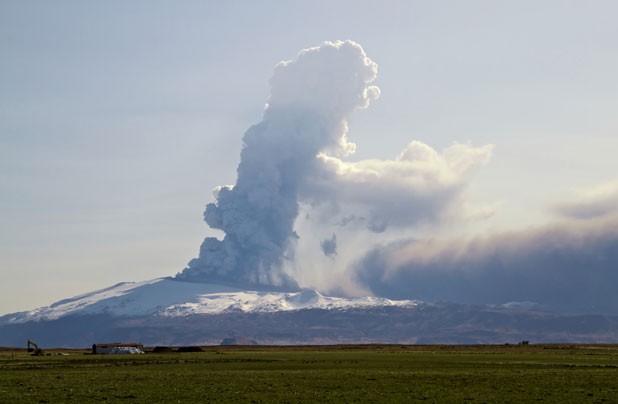 Aside from being unpronounceable, the Eyjafjallajökull volcano may finally be remembered by the hardship it did not cause. Yes, the airlines lost about $200 million a day during the no-fly period — and their investors and workers will feel the pain. SAS temporarily laid off 2500 employees. There was talk (though there is always talk) of British Airways going bankrupt.

Still, the press was uniquely unsuccessful in finding privation amid the ashes. Around the globe, reporters gathered tales of harrowing inconvenience.

The New York Daily News described a young French couple at JFK, who “live[d] on tiny, hard cots squeezed between piles of luggage and other weary travelers.” They rose at 3 a.m. to wash their armpits in the public bathrooms, before the crowds hit the sinks, and scavenged food from the vending machines. Each day, said the News, they battled “boredom and desperation.”

Other passengers watched their cellphone batteries run down as they hunted for electrical outlets in which to recharge them.

Paramount Pictures had to move the world premiere of Iron Man 2 from London to Los Angeles.

And cybercrooks — who take advantage of major news events to position their security-busting software for undetected download — were stymied trying to spell the volcano’s name.

I found one example of bona fide desperation in the Western media: 5000 Kenyan flower workers, who earn $4 a day, were furloughed while roses and other perishable agricultural products rotted on the loading docks. And, scouring the Asian, African and Middle Eastern press, I discovered another: Passengers from countries such as China, India, Iran, Pakistan and Bangladesh were virtually imprisoned in European airports, without access to their luggage, because of EU travel restrictions no doubt related to terrorism. According to an Iranian writing in the Asia Times, “the German government has been dragging its feet on issuing temporary visas to such stranded passengers, while passengers for example from Russia have received the paperwork needed to leave the airport.” Belgian officials worked harder to release 200 Bangladeshis, some with British passports, from the Brussels airport, where they’d been waylaid en route to Britain. One solution the officials considered was to let the Bangladeshis take a bus or train to London, “under supervision.”

All this says one thing: An earthquake, flood or volcano is a different event for the Dutch employee of an information technology company or the Spanish student bumming around California than it is for the impoverished Kenyan rose handler or Pakistani migrant family.

A hazard, wrote Bucknell University geographer Paul Susman, is “the interface between an extreme physical event and a vulnerable human population.” What makes populations vulnerable? “They are forced off their land or don’t have the resources to live,” he said. “They end up inhabiting dangerous places.” Politics, war, corruption and poverty, of both nations and individuals, conspire to create vulnerability.

From the potato famine of 1845, when British government free traders let the Irish starve while corn and barley were shipped to England to fetch better prices, to the Chinese earthquake of 2008, when shoddily built schools collapsed to bury thousands of children, it is acts of people, not of God, that make Earth either a homicidal abuser or just an angry, distracted mother.

Thanks to dysfunctional states, poor infrastructure and inadequate health care systems, 95 percent of deaths from natural events occur in poor countries. Heavy national debt and scarce insurance make reconstruction slow and spotty, if it happens at all.

Economic policy can exacerbate danger rather than mitigate it. Volcanoes, for instance, are not generally fatal. That’s because, through most of history, few people have lived near them. Yet today in the Bay of Naples, one of Italy’s poorest regions, “government-sponsored schemes of economic development and rural-to-urban migration have … resulted in at least 700,000 people now being at risk in the event of a future eruption of Vesuvius,” writes University of Liverpool geographer David K. Chester.

And once the Earth trembles or the sky opens, policy can worsen the after-effects — for some. As Naomi Klein documented in The Shock Doctrine, after the tsunami of 2004 conveniently removed poor fishermen from their beachfront homes, the Indonesian government prohibited them from moving back, so corporations could build luxury resorts on this prime real estate.

Nature is sometimes humankind’s evil business partner. The droughts, storms and other extreme weather brought about by global warming are starving the global south, while warmer weather might turn out to be a boon for northern nations. Ironic — since it’s the north whose cars and factories caused the environmental catastrophe in the first place.

The rich get richer; the poor get poorer. And even within classes, the restless earth settles the social sediment into layers. That Dutch worker held up for a week in Chicago is unlikely to lose wages — welfare-state regulations and benefits see to that. An American similarly indisposed, however, might lose her job.

For related reasons, the volcano has not caused much trouble in its own neighborhood. The eruption injured or killed no one. Of the country’s 310,000 residents, only a few hundred farmers living near Eyjafjallajökull were affected by the lava flows and melting glaciers. The ash cloud drifted away; Iceland’s planes flew.

In fact, Icelanders’ unity and moral self-image had been badly shattered by the collapse of the country’s major banks in the financial crisis of 2009. When Britain and the Netherlands demanded compensation for their losses, a popular referendum in Iceland rejected a tax on working people to redress the sins of the financiers. The wealthy nation had rarely had to confront class conflict. But it reportedly is pulling together as Eyjafjallajökull spits its wrath.

Icelanders are joking: “The Brits wanted cash, but since there’s no C in the Icelandic language, all they’re getting is ash.” And probably more than the nation’s esprit de corps will be restored in the eruptions’ aftermath. Given its history, it’s unlikely the state will abandon Eyjafjallajökull’s farmers to pick up the pieces on their own. In spite of its recent problems, Iceland is rich, its people are healthy, and its economy is resilient.

So, when millions of Haitians perish, when the Kenyan flower packer goes hungry or the Nicaraguan’s hut disappears under a mudslide, don’t blame Mother Nature. Blame ourselves. For there is nothing natural about the disaster in natural disaster.