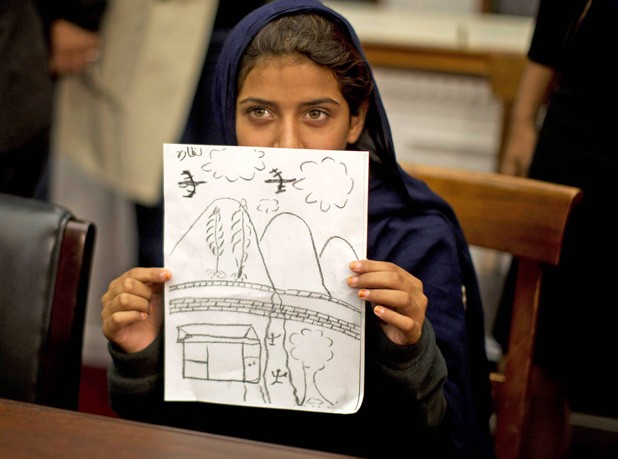 He made two this past year alone. First, in April, came War on Whistleblowers: Free Press and the National Security State, featuring analysis from and interviews with figures such as David Carr, Daniel Ellsberg, Glenn Greenwald and Seymour Hersh.

The film examined the president’s campaign of intimidation against journalists — and anyone else whose conscience might compel him or her to report government wrongdoing. On its heels comes Unmanned: America’s Drone Wars (recently released on DVD), an excoriating meditation on the “implications of killing hundreds of people ordered by the president, or worse, [by] unelected and unidentifiable bureaucrats within the Department of Defense without any declaration of war.”

Those aren’t the words of a film critic but of Rep. Alan Grayson (D-Fla), one of the organizers of the congressional briefing on drone strikes held on October 29, 2013. The session provided the first-ever opportunity for U.S. lawmakers to hear directly from the victims of America’s drone program. Exactly five elected officials popped by.

One of the people who testified that day figures prominently in the film. Rafiq ur Rehman is a Pakistani schoolteacher and father of two who lives in Waziristan. On the afternoon of October 24, 2012, his son (age 13), daughter (9) and mother (67) were picking okra in the field behind their home when they heard a buzzing overhead. “I could see the drone,” Rehman’s son testified, “but I wasn’t worried because we’re not militants.” Seconds later, the woman was dead and both children gravely injured.

Unmanned contains all too many stories like that, firsthand accounts of innocent men, women and children winding up on the wrong end of a Hellfire missile. Their stories make you wonder how CIA Director John Brennan keeps a straight face when claiming that “there hasn’t been a single collateral death,” as he’s shown doing.

At the same time, the film offers a credible sense of the damage that can be sustained on the opposite end of the process. We hear from a haunted 27-year-old Air Force vet named Brandon Bryant, who recounts his experience as a remote-control executioner. Let’s just say that playing real-life Call of Duty hasn’t done this dude’s psyche any favors.

One of the things I love about Greenwald’s work is the way he gets to the point. As with Whistleblowers, he’s in and out in an hour in Unmanned and doesn’t leave a base uncovered. The bottom line: The present administration is basically the previous administration on steroids.

Instead of learning from Dubya’s mistakes in the Middle East, Obama is making them all over again, only in a bigger way. If the Iraq debacle taught us anything, it was that American foreign policy can be a powerful terrorist recruitment tool. The secret escalation of drone warfare, Greenwald has said, is “breeding anti-American sentiment at a rate that would make Al Qaeda jealous.”

Rather than making us safer, Greenwald’s latest reveals, the slaughter of civilians has radicalized large numbers of Pakistanis who once considered the U.S. a valued ally. “Yes, there were 100, maybe 200 fanatics in tribal areas,” explains Imran Khan, chairman of the Pakistan Movement for Justice party. “Now you have 80,000 people who hate you. How will that make you more secure?”

Perhaps our Nobel Peace Prize-winning chief executive will answer that question in his State of the Union address. This goes to press just before the broadcast, so I will wait. I will see. What I won’t do is hold my breath.