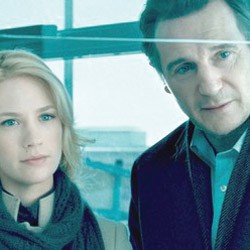 Liam Neeson’s action thriller Unknown has been marketed as a follow-up to the 2008 hit Taken, in which the actor played a mad dad who cuts a swath of mayhem through Europe to save his daughter from sex slavery. Besides Neeson, the new film shares with Taken a family angle, a gritty Euro setting and a one-word title. But viewers who expect the actor to reprise his role as a boomer bad-ass will be taken indeed.

Unknown director Jaume Collet-Serra (known not so promisingly for Orphan and House of Wax) seems to have aimed for a cerebral thriller about an ordinary man caught in extraordinary circumstances, along the lines of Roman Polanski’s Frantic. Set in wintry Berlin, Unknown has an elegant, murky-blue palette and decent action setpieces. What it lacks is the cerebral element, because its derivative script fails to give the main character an inner life.

Neeson plays Dr. Martin Harris, who appears to be living many guys’ fantasy when he arrives in Berlin for a biotech conference — he’s a science nerd, and he’s married to “Mad Men”’s January Jones. Things quickly go downhill from there. On his way to retrieve a forgotten suitcase, the scientist has a car accident that leaves him partially amnesiac, though which parts of his past he’s lost stay conveniently unclear. He retains enough presence of mind to return to his hotel, only to discover that his wife doesn’t recognize him, and a stranger (Aidan Quinn) answers to his name and carries his ID.

As films like Christopher Nolan’s Memento have shown, the amnesia plot offers rich potential for exploring the mysteries of identity — how people build their own sense of who they are. (Can Neeson be sure his life with Jones was real? Can the viewer be sure?) As countless other films have shown, in less capable hands, the amnesia plot is a lazy device for withholding important information from the audience.

Such is the case in Unknown, where the script fails to give Dr. Harris a discernible personality or a motivation beyond reclaiming what’s his. After a single friend in the U.S. fails to answer his call for help, Neeson simply wanders the bleak streets looking lost. Things get more exciting when he teams up with a streetwise illegal immigrant (Diane Kruger) to evade mysterious assassins and unravel the mystery of his replacement. But the answers come from outside him, leaving our hero something of a cipher — and a pawn in his own drama.

If Neeson is a blank slate, Jones matches him by looking flawless and emoting woodenly — even when her role calls for flesh and blood. (She suggests a cyborg update of Betty Draper.) Besides the always-reliable Frank Langella, it’s the foreign supporting actors who save the show — Kruger as the scared Bosnian (never mind that she looks more like a German supermodel); Bruno Ganz as the cunning former Stasi operative who does Neeson’s detective work; and Sebastian Koch (of The Lives of Others) as a researcher whose work might be the key to the mystery. They give the roles their all, while the film’s stars appear to be on autopilot.

The reasons for Neeson’s strange torpor eventually emerge, but by that time it’s too late for the filmmakers to rivet the audience. Unknown offers thrills here and there, and one visually impressive sequence set in an art museum. But, come next February, it’s probably destined to be unremembered.