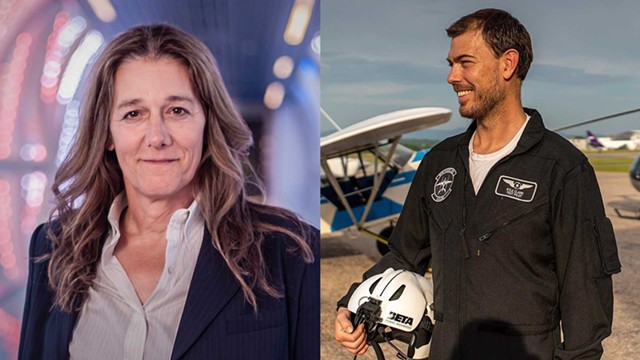 Vermont startup Beta Technologies has raised hundreds of millions of dollars to fund its drive to pioneer electric aviation. On Saturday, October 23, Beta founder and CEO Kyle Clark and its first customer, Martine Rothblatt, CEO of United Therapeutics, will speak in person during a special keynote presentation at the end of the 2021 Vermont Tech Jam.

About Beta and Kyle Clark

Based at Burlington International Airport, Beta Technologies is trying to do something that’s never been done before: manufacture a fleet of battery-powered aircraft capable of transporting people and cargo, and design the battery-charging infrastructure to support it.

Hundreds of companies around the world are racing to build battery-powered planes; air travel is a significant source of the greenhouse gas emissions driving climate change. Beta is one of the leaders of the pack. It has already received orders for planes from customers including United Parcel Service, aka UPS.

Vermont native Kyle Clark founded Beta in 2017. He’s a pilot, engineer and former hockey pro who had a vision for an electric aircraft that could take off and land like a helicopter, then fly like a fixed-wing plane. One of the company’s other competitive advantages? Martine Rothblatt, Beta’s first customer, who now serves as one of the company’s directors.

Rothblatt has been blazing trails for decades. A regulatory attorney, she cofounded Sirius Satellite Radio and helped develop the technology that made it possible. In 2013, she was the highest-paid female CEO in the U.S., earning $38 million. She’s also a pioneer in the field of digitizing human consciousness. The ambassador for her efforts in that realm, Vermont-based Terasem Movement Foundation, is a robot, Bina48, created using the downloaded memories of her wife, Bina.

In the 1990s, one of the couple’s daughters was diagnosed with pulmonary arterial hypertension, a fatal disease. In an effort to save her daughter’s life, Rothblatt researched possible treatments and started a biotech firm, United Therapeutics, to pursue them. Today the company sells five FDA-approved medicines that treat the disease; her daughter now works for the company.

Still, the only cure for the disease is a lung transplant, and there’s a severe shortage of available organs. So United Therapeutics plans to manufacture them. To deliver the organs to recipients in time, the company needs a special kind of aircraft. That’s where Beta comes in.

A July 31 Bloomberg Businessweek article about Rothblatt and her quest outlines the challenges and Martine’s extraordinary background as a lawyer and a trans woman who came out in her forties. The story quotes Liana Moussatos, an analyst at an investment firm, who’s been tracking Rothblatt’s work. “Martine is a different kind of person in general,” said Moussatos. “Once she has her mind set on something, she’s going to figure it out.”

In a special keynote presentation, Seven Days writer Chelsea Edgar will moderate an in-person conversation between Clark and Rothblatt about how they met, what led them to work together, and how their unique partnership has the potential to change Vermont — and the world.

More than 40 local employers will be hiring at the Tech Jam, which takes place at Hula, a lakeside tech campus in Burlington. The job fair portion of the event runs from 10 a.m. - 1 p.m., and 1:30-3:30 p.m. Beta Technologies will also be hiring at the event. Tech Jam attendees can try its MobileDome flight simulator, which will be parked outside Hula.

The presentation begins at 4 p.m., and requires a ticket for Session #2 of the Tech Jam, $10 in advance, $15 on the day of the event. A reception will follow with light hors d’oeuvres and a cash bar. Register for the event, and find more information, including a list of Tech Jam exhibitors, at techjamvt.com.

Masks will be required indoors at the Tech Jam in accordance with CDC guidelines.